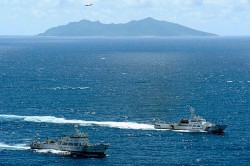 Japan’s Coast Guard has its hands full: Latest reports indicate up to 11 Chinese maritime surveillance ships have entered the Senkakus/Diaoyus’ Continguous Zone while a pair of fishermen swam ashore one of the islands before departing.

In addition to the anti-Japanese protests and violence which has flared throughout China this weekend, Chinese state media has indicated the possibility of further reaction to the nationalization of the Senkakus/Diaoyus to come later this week.  Chinese state radio said Monday that “1,000” fishing vessels are headed to the waters near the islands, as a fishing ban comes to an end.  Of note, the report quoted a Chinese source who said the vessels’ activities would be monitored by a “marine observation satellite.”  It is unclear whether this is an attempt to say the six vessels still believed in the vicinity of the islands will attempt to avoid a confrontation with the Japanese Coast Guard on station, or whether it just indicates China will be watching the situation very closely.  Meanwhile, Hong Kong reports that the ship Kai Fung 2, which earlier helped keep the islands in the spotlight, will attempt a return voyage this week as well. 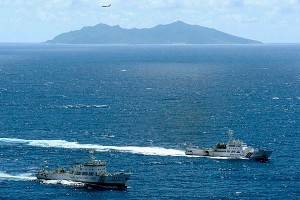 In the past week, while American attention has largely been diverted, China appears to have taken a number of steps to change the reality of the situation in the Senkakus/Diaoyus (hereafter referred to as Senkakus for brevity’s sake) in a coordinated diplomatic, media, legal, and physical push.

With the maelstrom of news emanating from the Muslim world, U.S. media coverage of other, possibly more consequential events inevitably slackened.  Fortunately our international and domestic partners have carried the ball a bit with regards to the disputed islands claimed by Japan, China, and Taiwan.  While we noted the reports on Tuesday of two Chinese ships – the Hai Jian 46 and Hai Jian 49 – dispatched to and arriving outside the islands’ Territorial Waters (TW), the number that arrived eventually totaled six, twice as many ever previously sent by China at one time.  A good account of the stand-off, on pause for now, can be found at The Asahi Shimbun.  Although the Chinese vessels have all left the islands’ TW, they remain in the direct vicinity.

The Senkakus are the same five islands, under administrative control of Japan (and populated only by goats), at the center of Japanese Coast Guard clashes with Chinese fishermen and most recently protestors from all claimants.  The Atlantic Council of Canada has a good article on the history of the conflict, but the immediate cause of the Chinese flotilla was the purchase of three of the islands by Japan’s national government (another was already government-owned, and the last owned by another private owner).  The decision to go forward with the purchase was forced by Tokyo’s nationalist metropolitan government, which also attempted to buy the islands but would have furthered their use as a provocative cause célèbre – whereas the central government has mostly sought to play down tensions between the two economic partners.

However, with the lead-time given by advance warnings of the sale date on Sept. 11th, China had time to prepare a coordinated response.  As our counterparts @Galrahn and @cdrsalamander noted, this response not only involved the vessels themselves (which, significantly or not are from State Oceanic Administration while previous vessels were from the Ministry of Agriculture) but also articles backing the move ready to run in China’s state media.  Further, these actions appear timed to coincide with the PRC’s announcement of baselines demarcating their claims and the start of weather forecasts for the area.

Although unprecedented for this particular conflict, China appears to be following a course it charted earlier this summer in the South China Sea, where it has so far successfully established a new reality on the ground with the Philippines-claimed and previously administered Scarborough/Pantang Shoal.  The Philippines Coast Guard pulled back its vessels on June 16th due to bad weather and has yet to return, effectively ceding control to the Chinese civilian maritime agencies, who have maintained a presence in the area and attempted to physically impede any non-Chinese vessels.

Back in the East China Sea, as the Christian Science Monitor noted, China likely had to take some action to appease nationalist sentiment at home in reaction to Japan’s moves.  But the paper also said that the movement of the vessels back out of the islands’ TW can be taken as a sign of China’s unwillingness to take things too far.  Here’s hoping they’re right – and that fears of further turmoil before the country’s leadership transition will serve as a break.  But with precedence already established in the South China Sea, and the vessels still loitering in the area, many signs point to the potential for future confrontation – and it may begin as early as next week.

On Friday Xinhua said the vessels will start “patrol and law enforcement around the Diaoyu Islands” while the catalyst for conflict could begin Sunday, when China’s self-imposed three-and-a-half-month fishing ban in waters near the Senkakus ends (although a typhoon to the east of the islands may further complicate the situation (h/t Galrahn)).  A Bureau of Fisheries official stated: “A large number of fishing boats will leave their ports…We will resolutely protect China’s sovereignty and the safety of fishers and step up controls in marine areas that include the Diaoyu Islands.”  Adding to the fun, Taiwan has also sent two Coast Guard vessels to protect any of its own fishermen brave enough to wade into the waters.

From the perspective of the U.S., hoping to de-escalate any conflict between two of its most important trading partners and avoid being dragged in to an armed conflict, it’s clear we need better mechanisms with the PRC in case of emergency.  The threat of MEOW (mutual economic obliteration worldwide) is not enough.  It’s vital to separate the sides in the early stages to prevent a confrontation going past a point of no return – so we need to know who to call, and that they’ll have actual authority to call vessels back.  That is of course easier said than done with a country whose future president can drop of the face of the Earth for over a week at a time.  What the U.S. can work on, however, is building “habits of trust and cooperation,” through increasing partnership opportunities with China – a topic I will return to shortly.

If the long-term solution has to be through international diplomacy, China, by demarcating its claims to the specific rocks and islands around the Senkakus – a step experts have called the Chinese to take in the South China Sea – might this week actually have made progress of a sort.  But next week might not be as useful.

5 thoughts on “(Updated 9/18) Keeping up with the Senkakus: China Establishing a New Reality on the Ground…er, Sea”