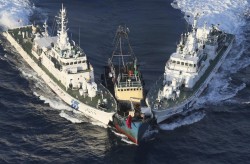 The activists, crew, and media are all in custody, as Japan prepares to deport them. This action forestalls the sort of diplomatic crossfire the central government faced from nationalists at home and the Chinese government when it briefly held for trial a Chinese fisherman who rammed a coast guard vessel in 2010, before letting him go. Meanwhile, we have some great photos from the incident.

Activists on the Kai Fung have reportedly landed on the Diaoyus/Senkakus after their vessel was rammed (likely forcibly bumped) by Japanese Coast Guard ships trying to deter the crew from reaching their destination. Most of the crew is in Japanese custody.

Fourteen brave souls set sail for what they hoped would be a voyage of protest championed by their nations. Up to now they have been beset by dwindling food supplies, government obstruction, and a threatening tropical storm. In the process, the journey of the Kai Fung No. 2 has provided fresh insight into the process of managing the at-sea skirmishes that blow over into diplomatic confrontations.

According to The South China Morning Post, Kai Fung No. 2 got underway Sunday from Hong Kong with eight activists from Hong Kong, Macau, and man from mainland China, while the remaining six are ship’s company and reporters. Their destination was the disputed Senkakus/Diaoyus/Tiaoyus claimed by Japan, China, and Taiwain, under Japanese control, and home to a hearty tribe of goats. Unfortunately things didn’t go as planned. On Monday, the SMCP reported:

Activists from Hong Kong, Taiwan, and mainland China initially planned to undertake the voyage together, but the mainlanders yesterday said they would withdraw.”

The Taiwanese were also prevented from getting underway when their charter company unexpectedly cancelled their trip. The Kai Fung barely slipped past the HK government after its previous 6 attempts were blocked. The captain reportedly waited out a boarding party of four HK marine police officer in the locked captain’s bridge until they retreated as the vessel headed to international waters. Misfortune didn’t stop at sea, however:

The Hong Kong activists’ vessel had a bad start, as much of their food rations fell overboard amid the rough seas. Organizers said they hoped to restock Kai Fung No 2, with 14 people on board, in Taiwan.

These plans were dashed as Taiwan’s Coast Guard Administration denied them entry, ostensibly for lack of a permit. In a session of that nation’s National Security Council later that day, the country’s officials decided to allow the vessel entry on humanitarian grounds due to the shrinking supplies and the approach of Tropical Storm Kai Tak. Kai Fung is now expected to call at the northern Taiwanese port of Keelung.

Whether the Kai Fung actually makes it to its original destination, the episode shows that China and Taiwan will go to great lengths to control the timing and nature of their confrontations. Both nations have been far from shy in advancing their claims on disputed maritime territories (China sent patrol vessels to the islands in July), but they typically like to deal with other nations in a more controlled manner, through fishing fleets or state vessels, to best calculate the diplomatic impact and repercussions. Admittedly many of the confrontations in the South China Sea can be chalked up to the PRC’s various regional and state agencies vying for influence and favor. But when an at-sea flare-up doesn’t stand to directly bring favor to any state official the central regime can pull back on the reigns with the cooperation of the various arms of government.

It’s possible that in the aftermath of last month’s incursion by China and the maneuvering of the Japanese central government to prevent provocations by Tokyo’s nationalist governor, an unspoken (or clandestine) peace has been brokered between the claimants to keep the issue at bay until after elections in Taiwan and the leadership transition in China. Hong Kong said the owner of the Kai Fung now faces fines upon the group’s return. If they make it to the islands they are likely to face Japanese coast guard vessels ready to interdict and turn them back.  From the Japan Times:

The protesters aboard the Hong Kong vessel have said they will tear down Japanese-built structures and plant a Chinese flag to declare sovereignty if they manage to land on the isles.”

Chinese activists aren’t the only one to test the Japanese government’s ability to keep a lid on confrontation – nationalist lawmakers from Japan may be planning to make a trip to the islands later this month.

3 thoughts on “A Voyage of Unintended Discovery (Update 8/16)”