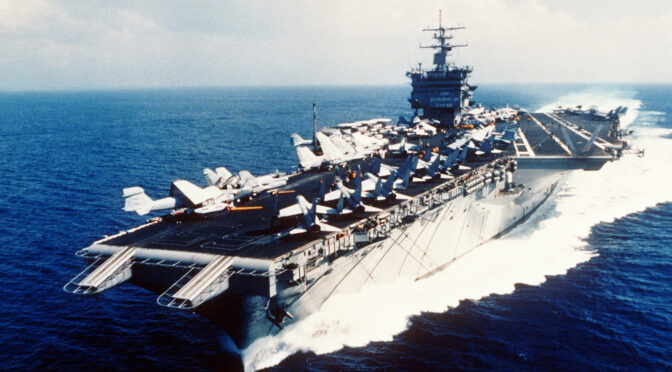 In 2021, CIMSEC launched an interview series on the U.S. Navy’s 1980s Maritime Strategy. Through discussions with those helped conceive and advocate for this historic strategy, important lessons on the maritime dimension of great power competition will emerge.

The 1980’s Maritime Strategy was published in unclassified form in January 1986, and had been widely briefed and discussed by the Navy’s leadership for several years prior. The strategy marked a sea change in the Navy, including from being a force that would have been primarily committed to continental resupply and defensive convoy escort in the event of World War III, to a force that would instead pursue a global, wide-ranging offensive against the flanks of the Soviet Union. The strategy also highlighted the value of the Navy in peacetime crisis response and the importance of ready forward presence. Among the things that make the strategy historic and unique, what is notable is how broadly it aligned naval leadership to how the Navy would be employed in peacetime and in conflict, and how it explicitly and unabashedly laid out a general scheme of offensive operations for how it would fight great power war.

There is a deeper story to the strategy that is also historic and goes beyond the unclassified publications and public pronouncements. The story of how the strategy came to be, of how the Navy’s strategist community assembled, debated, and embedded the strategy in the institution of the Navy is a story worthy of the utmost consideration.

CIMSEC interviewed select individuals to tell this story and capture valuable lessons for how the Navy can consider maritime strategy in the context of great power competition. We thank these individuals for their excellent contributions.

Secretary John Lehman, on “Strategic Credibility and Leveraging Command of the Seas.”

Mike McDevitt, on “The Strategic Studies Group and Connecting Strategy with Programming.”

Dr. Stanley Weeks, on “Briefing the Maritime Strategy and Making the Strategic Difference.”

Irv Blickstein, on “Programming the POM and Strategizing the Budget.”

Bill Owens, on “The Strategic Studies Group and Taking Strategy to Sea.”

Spencer Johnson, on “Writing and Briefing the Maritime Strategy.”

Pat Roll, on “Tactics of the Maritime Strategy and Cover and Deception Operations.”