CIMSEC discussed the 1980s Maritime Strategy with Capt. Robby Harris (ret.), who helped draft the 1986 unclassified version of the strategy that published in Proceedings. In this discussion, Harris discusses how the unclassified version was initiated, how steady state competition and crisis response figured into the strategy, and how bold leadership at the highest levels of Navy leadership elevated the importance of maritime strategy.

What was your personal role and relationship with the Maritime Strategy?

In September 1982 as a brand-new Navy commander I reported for duty to the Navy’s Long Range Planning staff (OP-00X) under then-Rear Admiral Chuck Larson (later CINCPACFLT and CINCPAC). I already had higher education credentials and experience in the strategy and policy world, like many of my peers who worked on the strategy at that time. OP-00X was personal staff to CNO Admiral James Watkins. Soon after I reported for duty Admiral Larson was transferred and the OP-00X staff was combined with the staff of the CNO Executive Panel (OP-00K). OP-00K also was personal staff to the CNO responsible for providing staff support to the civilian members of the CNO Executive Panel (CEP). OP-00K provided strategic advice directly to the CNO with zero intermediaries, i.e., we did not report via the Vice CNO. The CNO Executive Panel (CEP) was a Federal Advisory Committee and the CNO was the only service chief with his own Federal Advisory Committee. Members of the CEP included some of the Cold War’s most noted strategists, including Albert and Roberta Wohlstetter, James Woolsey, Helmut (Hal) Sonnenfeldt, Henry (Harry) Rowen, Andrew Marshall, and others.

Because of the prominence of the CEP membership, CNO Watkins directed that the Maritime Strategy be briefed and discussed with the CEP several times. As a CEP staff officer, I sat in the room and observed the briefings and discussions on numerous occasions. By late 1983 I had heard the strategy briefed and discussed many times at a very high level. By early 1984 after listening to the strategy so many times it occurred to me that the strategy should be declassified and printed in USNI Proceedings. Because of my position on the CNO’s personal staff I was able to make the recommendation to CNO Watkins. CNO Watkins approved my recommendation and I was sent off to Annapolis to meet with Fred Rainbow, the editor-in-chief of Proceedings, to deliver the CNO’s decision. In late 1985 before I detached from the OP-00K staff Captain Linton Brooks and I wrote the first draft of the CNO’s Proceedings article. There were many more drafts after that initial one. The rest is history.

I should point out that I felt that the Maritime Strategy as often briefed in DC in the early 1980s over-emphasized the role of the U.S. Navy in a conflict with the Soviets and did not sufficiently emphasize the day-to-day operations of the U. S. Navy in fostering the country’s economic standing and the post-WWII order (we didn’t call it the Liberal Order then!). My colleague Captain Peter Swartz informed me that I was not alone in my belief. Peter reported that “RADM Ron Kurth felt strongly about this as well, and pushed back at me hard in front of a room full of more senior flags that I was briefing. ‘Peter, we’re never going to fight the Russians! We’re going to continue to put out fires and deploy all over the world in lesser contingencies. That’s what the strategy should be about, because that’s what it is about, in the real world.’” Peter explains further that the strategy’s emphasis on fighting the Soviets was necessary to gain leverage with the Office of the Secretary of Defense (OSD) and the Joint Staff. Nevertheless, I thought that the strategy should place greater emphasis on the Navy’s role in ensuring conventional deterrence, crisis management, and tamping down localized conflicts and crises.

Although I certainly am not solely responsible, the final version of CNO Watkins’ Proceedings article reflects several of my recommendations and areas of emphasis. Examples include:

“…our Navy devotes much of its effort to maintaining this stability. Potential crises and the aftermath of crises have increasingly defined the location and character of our forward deployments.”

“Since 1948, the Third World has been the most common arena for United States-Soviet competition, and this pattern will continue.”

“Among the greatest services we can provide the nation is to operate in peacetime and in crises in a way that deter War.”

“By its peacetime presence throughout the world, the Navy enhances deterrence daily.”

“The heart of our evolving Maritime Strategy is crisis response…our ability to contain and control crises is an important factor in our ability to prevent global conflict.”

“Crisis response has long been the business of the Navy and Marine Corps.”

“…our peacetime strategy must support U. S. alliances and friendships. We accomplish this through a variety of peacetime operations including ships visits to foreign ports and training exercises with foreign naval forces.”

“Although deterrence is most often associated with strategic nuclear warfare, it is a much broader concept…we must deter threats ranging from terrorism to nuclear war.”

“Through early, worldwide decisive use of sea power we—along with sister services and allies as appropriate—would seek to win the crisis, to control escalation, and by the global nature of our operations, to make clear our intention to cede no area to the Soviets…”

“Through worldwide peacetime operation and the ability to react in crisis, maritime forces play a major role in binding together alliances in preventing escalation.”

What was the impact of that Proceedings article on the debate surrounding maritime strategy?

How did the Maritime Strategy describe the balance between operations for steady state competition and operations for high-end warfighting contingencies?

Although I cannot take full credit for it, the article provides a nice balance between forward presence, crisis response, conventual deterrence on the one hand and strategic deterrence and warfighting with the Soviets on the other hand. (See Figure 3 from the strategy below). The fiscal largesse begun in the final years of the Carter Administration and the Reagan largesse made it feasible to do both: rigorous day to day ops for reinforcing the liberal rules-based regime and preparations for a big fight with the Soviets. Since the end of the Cold War we have not seen sufficient resources to do both well. 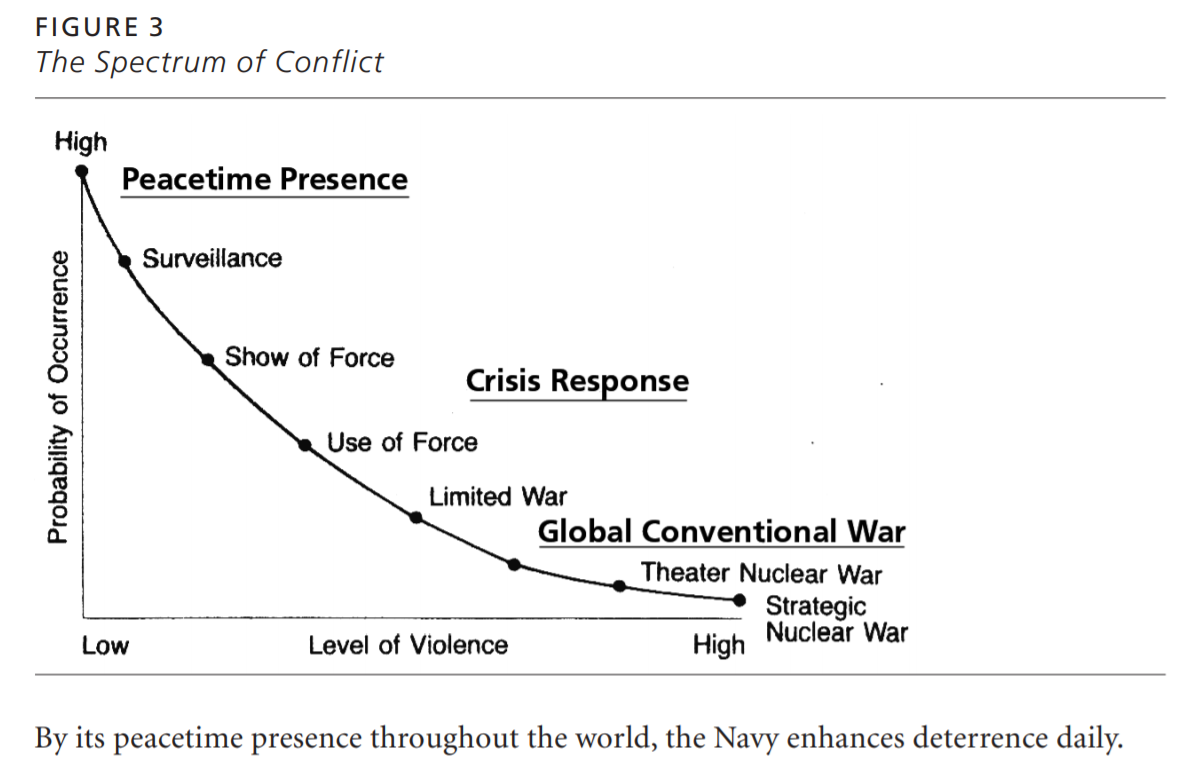 Why did the Maritime Strategy “work,” if it did, and what about its strategy development process has been challenging to replicate since then?

My colleague Dr. Steve Wills would probably say the difference between the 1980s and today is the Goldwater Nichols Act (GNA), and there is merit to such an argument. But even before GNA, primacy for strategy development lay outside the services and was invested in the regional commanders and the Secretary of Defense (per the Eisenhower reforms of 1953 and 1958 which had already transferred control to the CINC’s for strategy planning). As my colleague Captain Robert (Barney) Rubel has written, even before GNA the CNO Watkins/SECNAV Lehman team was “coloring outside the lines.” That to the aside, because SECNAV Lehman was such a strong leader and had the firm support of President Ronald Reagan the Navy was able to move forward with the strategy. That condition does not exist today.

What lessons can be taken from the Maritime Strategy for engaging in modern great power competition?

Strong advocacy of maritime strategy at the highest levels of government is essential.