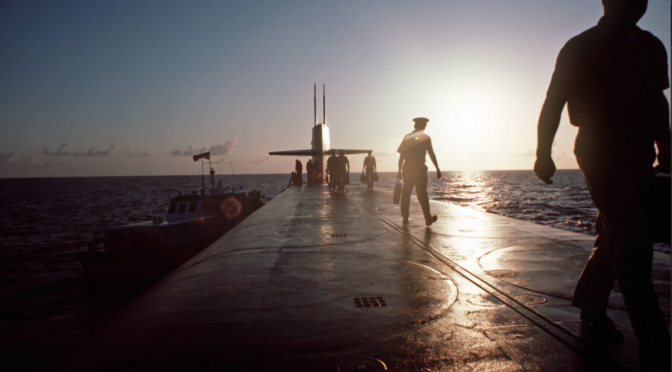 CIMSEC discussed the 1980s Maritime Strategy with Professor Barry Posen of MIT, who at the time emerged as a challenger of some of the strategy’s precepts. In this discussion, Posen discusses the possibly escalatory nature of the strategy, the nuclear risks involved, and how operational war plans deserve to be scrutinized by civilian policymakers.

What were your thoughts on the Maritime Strategy when it published during the 1980s?

I had two views because it was both a surface and air warfare strategy, and an undersea warfare strategy. The surface warfare aspects, especially the plan to move aircraft carriers north to strike the Kola Peninsula, seemed absurdly risky to the ships given the minor gains to be had from those airstrikes. The forward anti-submarine warfare (ASW) operations against Soviet ballistic missile submarines (SSBNs) struck me as needlessly escalatory. The purpose of “Flexible Response” was to prolong the conventional phase of the war. Conventional strikes on Soviet SSBNs turned the conventional phase into the first phase of a counterforce nuclear attack. I was concerned that the Russians might see it that way, and perhaps use nuclear weapons to warn the U.S. to back off. No nuclear-armed country likes losing its secure second-strike capability.

Did the offensive spirit of the Maritime Strategy adversely affect deterrence and escalation dynamics?

It is hard to know what were the effects on deterrence. The advocates thought the threat helped deter by increasing the risks the Soviet would run in a large-scale conventional attack on the West. I am unaware of any deep dive into Russia’s (Soviet) archives that would answer the question of whether it worked that way. I feared that it would intensify escalation dynamics in many ways. Fortunately we never ran the experiment.

How do you think the Maritime Strategy was received by allies and the Soviet Union, and how would you explain their reactions?

I think the Soviets knew exactly what the U.S. Navy was going to do. That is why they planned to turn the Barents Sea into a defended bastion. (They probably also had pretty good naval intelligence during that period through the Walker spy ring.) I don’t know what most U.S. allies thought about the strategy. Insofar as they were always worrying about nuclear decoupling, they probably liked the U.S. threat and thought it enhanced deterrence. Whether they would have questioned going through with it in the event deterrence failed is another question. I do remember the Norwegians were so happy to hear that the U.S. was coming that they did not wish to ask too many questions about why.

What alternative would you have advocated for in terms of strategy and how American naval power might be applied?

The U.S. and its allies had a very effective system of ASW barriers between the Soviet bases in the Kola Peninsula and the Atlantic sea lines of communication. One argument for threatening Soviet SSBNs was that it tied down their attack submarines defending the bastion. My view was that the very existence of U.S. SSNs created a contingent threat to the bastion no matter what we did. Therefore the Soviets would not risk their best submarines running the barriers off the North Cape and the GIUK gap, or even the convoy escorts to try to sink resupply shipping. I would have relied more on those barriers and held the SSN offensive in reserve. My estimate at the time, however, was that the Navy was so invested in the offensive that they would not hold back. Indeed, because finding Soviet SSBNs was much easier if you could trail them as they deployed, my fear was that the U.S. Navy’s search for tactical leverage would lead them to advocate a crisis surge of SSNs into the Barents. This would have accelerated the pace of any crisis and might have produced an entirely unnecessary war.

I am unaware that the debate at the time had much impact. The one positive aspect of it was that it illuminated for civilian policymakers that to manage or avoid escalation in anything as large and complicated as a NATO–Warsaw Pact War, that they should look at the operational plans for themselves. This was not done much in those days and probably isn’t now. But I do know that some in the policy community were at least prompted to think about this. It is known that civilians have had a very hard time over the years even getting good access to the nuclear war plans. So this is a hard organizational politics problem. That said, the debate has had legs. Scholars of the emerging competition in Asia are also asking some of these questions.

One is always tempted to look at the past through rose-colored lenses. But it is increasingly my view that attentive civilians, even those without clearances, somehow had more visibility into fundamental military issues during the Cold War than they do now. Everyone involved took the Cold War very seriously, and the U.S. government and the military had to explain themselves. This surfaced a lot of useful information.

By comparison the Global War on Terror has produced a very strong penchant for secrecy. I am not convinced that we have as much visibility into military issues now as we did then. In part this is also due to the Congress relinquishing its oversight role and to the growth of the prestige of the U.S. military in society. Too few people are asking hard questions, and the military has an easy time waving them off. This may all be set to change, if and as the competition with China grows more serious.

Barry R. Posen is Ford International Professor of Political Science at MIT, Director Emeritus of the MIT Security Studies Program, and serves on the Executive Committee of Seminar XXI. He is the author of, Restraint: A New Foundation for U.S. Grand Strategy, (Cornell University Press 2014), Inadvertent Escalation: Conventional War and Nuclear Risks (Cornell University Press 1991), and The Sources of Military Doctrine (Cornell University Press 1984 ). The latter won two awards: The American Political Science Association’s Woodrow Wilson Foundation Book Award, and Ohio State University’s Edward J. Furniss Jr. Book Award. He is also the author of numerous articles, including “The Rise of Illiberal Hegemony—Trump’s Surprising Grand Strategy,” Foreign Affairs, March/April 2018, “It’s Time to Make Afghanistan Someone Else’s Problem,” The Atlantic, 2017, “Contain ISIS,” The Atlantic, 2015, “Pull Back: The Case for a Less Activist Foreign Policy,” Foreign Affairs, January/February 2013, and “Command of the Commons: The Military Foundation of U.S. Hegemony,” International Security, (Summer, 2003.) He is a Fellow of the American Academy of Arts and Sciences. In 2016 he was appointed Henry A. Kissinger Chair (visiting) in Foreign Policy and International Relations at the Library of Congress, John W. Kluge Center. He is the 2017 recipient of the International Security Studies Section (ISSS), International Studies Association, Distinguished Scholar Award. He has been a Council on Foreign Relations International Affairs Fellow; Rockefeller Foundation International Affairs Fellow; Guest Scholar at the Center for Strategic and International Studies; Woodrow Wilson Center Fellow, Smithsonian Institution; Transatlantic Fellow of the German Marshall Fund of the United States; and a Visiting Fellow at the John Sloan Dickey Center at Dartmouth College.