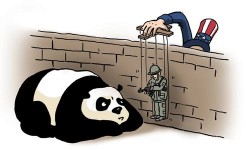 This is the second installment in a series on preventing an armed conflict between the U.S. and China. Click here to read the first installment.

As part of the American shift in strategic focus to the Asia-Pacific, U.S. Secretary of Defense Leon Panetta is touring the region, and has made important stops, among others, in India and the Shangri-La Forum in Singapore. Before departing on his journey, he addressed the 2012 graduating class of the U.S. Naval Academy. In his speech he told the Midshipmen:

America’s future prosperity and security are tied to our ability to advance peace and security along the arc extending from the Western Pacific and East Asia into the Indian Ocean and South Asia.”

That prosperity and security rest on the Pacific living up to its name is true not only for the U.S. but also for China. Many believe this simple fact will be enough to prevent conflict. Among others, in his book The World is Flat, Thomas Friedman’s “Dell Theory” argues that no two countries both part of a major global supply chain like Dell’s will ever fight a war against each other, as long as they are both part of the same global supply chain.

However, hope that a rational fear of Mutual Economic Obliteration – Worldwide, or MEOW, is not enough. It does not absolve us of our duty to find other means of prevention. Rational calculations may factor little in the run-up to a conflict, at least those calculations about the good of the state rather than the good of the party or individual. This is especially true in China, where the military’s allegiance lies with the party and not the nation. As I mentioned in my first post, additional means of prevention fall generally into one of two distinct, but related categories: actions to sow respect, and those taken to create familiarity.

Reap What You Sow

In his speech at the Naval Academy, Secretary Panetta also outlined both of these approaches, calling on the Midshipmen to:

…strengthen defense ties with China. China’s military is growing and modernizing. We must be vigilant.  We must be strong. We must be prepared to confront any challenge. But the key to peace in that region is to develop a new era of defense cooperation between our countries – one in which our militaries share security burdens to advance peace in the Asia-Pacific and around the world.”

When Secretary Panetta says, “We must be vigilant. We must be strong,” he’s talking about those actions that sow respect. Maintaining a strong naval presence (60% of U.S. Navy surface ships by 2020), strong naval capabilities, and a dedication to naval professionalism. The seminal 2007 work, A Cooperative Strategy for 21stCentury Seapower (CS21), (which the CNO recently announced will soon undergo a revision process) discusses deterrence in similar terms, talking of combat power to “deter and dissuade potential adversaries and peer competitors.” Some of this reasoning relies on a rational actor China that might not always hold true. However, even when the prospect of delayed pain, such as a later economic calamity, does not induce one to seek peaceful solutions, one might be so induced by the prospect of a more immediate pain in the form of destruction at sea. Regional partnerships and alliances, with clear responsibilities and demonstrated support bolster respect for America’s potential military response. Credible combat power, on the scene or close at hand, can therefore help deter instances of spontaneous tactical aggression and calculated strategic aggression.

Yet, pursued by itself, such an approach could have negative side-effects. To forestall unilateral military action by the U.S.’ own emboldened partners, they must know that the U.S. will not back them, right or wrong, but only when they are in the right. More importantly, an array of regional allies and combat power lurking nearby can be viewed as a threatening encirclement, or as China now claims, a new attempt at “containment.” It is thus important to pair the attempts at sowing respect with a simultaneous drive to enhance familiarity.

The second aspect of Secretary Panetta’s address, aimed at enhancing familiarity, called for strengthening defense ties and security cooperation with China. A frequent refrain from some schools of foreign policy experts has been that bringing China into international institutions will help “bind” it to international norms, by giving it incentives to play “by the rules” and a chance to shape those rules. This has largely worked in the trade realm with China’s entry into the World Trade Organization in 2000, although with the hiccups expected from initiating such a large new player.

In the security and defense fields, little progress has been made in bringing China into an active partnership beyond the standard “comprehensive” international treaties on arms and POW regulations. The PLAN’s counter-piracy task forces have offered one of the few chances to work together, if only from a distance.

This lack of progress is for a variety of reasons. The U.S. Congress restricted the extent to which the U.S. military can build its formal ties with China’s, mainly limiting agreements and operations to Search and Rescue (SAR) and Humanitarian Assistance / Disaster Response efforts. For China’s part, its leadership has a tendency to hold every exercise and bilateral meeting hostage to the ongoing political issues of arms sales to Taiwan and American meetings with the Dalai Lama. Additionally, those exercises and exchanges that do go forward are often viewed primarily as overt intelligence collection opportunities for the Chinese.

For prevention to truly work, the U.S. needs more normalized, integrated defense ties with the Chinese. While I am not the first to call for it, building “habits of cooperation,” is absolutely vital to diffusing those instances when misunderstanding and accidents lead to a stand-off with few face-saving options. In the Cold War the U.S. had red phones with the Russians and generally understood rules for behaving at sea. Today, the U.S. can do much more with the Chinese, who are not looking to export a world ideology. The U.S. and China have many mutual interests that extend beyond economics and piracy to terrorism and North Korea’s instability.

The time is ripe for a change in thinking about China’s military threat. While it is important to sow respect through U.S. combat capability, it is just as important to work on what CS21 calls “extended deterrence” – using effective Theater Security Cooperation activities to create security and remove the conditions for conflict. In the Asia-Pacific, removing conditions for conflict means turning China from a potential foe to an ally. More tested than Friedman’s Dell Theory, rare is the instance when allies fight a war. Such a task is of course easier said than done, and many high but not insurmountable hurdles lie in the way. In part 3 of this series I will examine one model for starting the process of strengthening prevention, with current realities and limitations in mind.

3 thoughts on “Thinking about Prevention, Pt. 2”