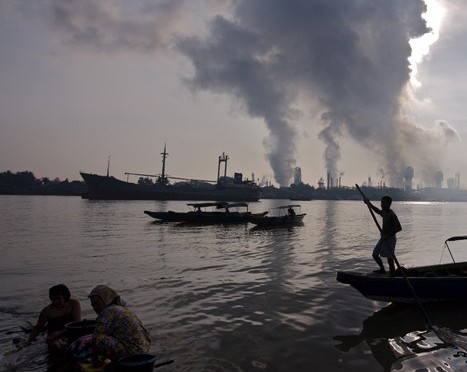 This feature is special to our Private Military Contractor (PMC)s Week – a look at PMCs’ utility and future, especially in the maritime domain.

In a week-long operation in June 2010, 6 vessels were attacked and robbed over a 130-mile span while in a nearby strait armed security contractors kept watch for the pirate threat.1 The same waters have played host to a “sophisticated syndicate…deploying speedboats from motherships” with raiding parties able to “board, rob, and disembark a vessel with ﬁfteen minutes without the bridge knowing.”2 The location was not the Somali coastline or the Bab el-Mandeb, but rather 4,000 miles to the east, among the Anambas Islands and the Singapore Strait.

For the past decade or so, when people thought of private military contractors (PMCs)3 they typically thought of land-force outfits like the Academi formerly known as Blackwater and its founder Erik Prince. During this same period, the word “piracy” generally brought to mind skiffs plying the waters of the Horn of Africa and Gulf of Guinea. Others have written elsewhere on this site that some of the more interesting uses of PMCs during this timeframe have in fact been in combating (or attempting to combat) the now-diminished pirate scourge off East Africa in the form of private maritime security companies (PMSCs). Yet historically one of the greatest epicenters of piracy has been in the waters of South and Southeast Asia. If the region, already home to PMSCs operating in a variety of capacities and more than one-third of the world’s seaborne-oil trade, faces a resurgence of piracy, it may see a similar growth in PMSCs.4 This article will touch briefly on the historic precedents, preconditions encouraging the presence of PMSCs, and regional factors affecting their utility.

South and Southeast Asia have long been home to private and quasi-private security arrangements. Cdr. Chris Rawley, U.S. Navy Reserve, notes that “historically, the line between privateering and piracy has been a thin one. From the 15th to the 19th century, pirates were often employed as a political tool by the Malay states to resist colonization by disrupting trade of the British and Dutch. Conversely, in the mid-1800s, the British East India Company’s private armies protected shipping in Malacca from pirates.”

The history of Singapore’s founding and growth under British rule is itself closely tied to this blurred public-private partnership. When the British arrived at Malaysian Singapore and sought local allies to protect their trade and investment, the recently displaced Temenggong, sea lord of the orang laut sea people, who themselves were noted for their marauding maritime prowess, presented himself as an acceptable solution. The Temenggongs thus served as part local officials, pressured to resettle their power base to neighboring Johor, and part maritime security contractors for hire, serving British counter-piracy operations in the early 1800s and port security for Singapore.5

In recent years, PMSCs have provided a range of services in South and Southeast Asia. According to The Diplomat’s Zachary Keck, “PMCs operating in Southeast Asia have primarily been focused on providing maritime security to clients, particularly in combating piracy. This has been especially true in narrow chokepoints like the Malacca Straits” and has included companies such as Background Asia and Counter Terrorism International (CTI).

In addition to providing these escort vessels and transit/cargo security aboard merchant vessels, PMSCs have worked extensively on port security (Gray Page, Pilgrim Elite, and the Glenn Defense Marine Asia group now know for the ‘Fat Leonard’ scandal), training and maritime hardening efforts (Trident Group), crisis response, and fisheries protection in countries’ exclusive economic zones (EEZs) (Hart).6 PMSC experts James Bridger and Claude Berube remark that in contrast with Africa, the companies in South and Southeast Asia place a greater focus on port vs transit security, due in part to the prevalence of at-berth and in-port crime, as well as training, vessel hardening, and security planning.

What conditions have given rise to this most recent cast of companies? In Carolin Liss’s 2011 book Oceans of Crime, she attributes the rise of PMSCs in South and Southeast Asia to several factors including states divesting former functions and the changed security landscape. This includes relatively more powerful transnational actors, both those interested in stability such as multinational corporations and multilateral institutions and those, such as terrorist organizations, interested in the opposite. Another element of the changed landscape facilitating PMCs’ rise is to Liss the disappearance of the Cold War struggle between the United States and Soviet Union, and the attendant opportunities for training of regional security forces.7 Further, post-Cold War terrorism heightened the focus of governments and the shipping industry on maritime security, as the threat joined piracy as a perceived regional risk to maritime assets, although it has so far failed to be nearly as impactful.8

In general PMSCs may find a market whenever the threats to maritime assets – be they from criminals, separatists, or environmental, corporate, or territorial disputes – appear to outweigh states’ capacities to safeguard those assets. The perception of corruption or distrust of the competency and fairness of states’ protective functions will similarly further the reception for external services.

How do these threat measures stack up in South and Southeast Asia? The first thing to note is the wide variance among the nations and waters of the region – as can be expected from such an diverse expanse generalities are hard to come by, so the following is a survey rather than a summation of the area.

With regards to the historical scourge of piracy, a recent report by the insurance firm Allianz made headlines for describing a 700 percent rise in actual and attempted attacks occurring in Indonesian waters in a 5-year span, from 15 in 2009 to 106 in 2013,9 although most of these were robberies at berth or at anchor.10 The International Maritime Bureau (IMB)’s April 2014 update notes that Indonesian “Pirates / robbers are normally armed with guns, knives and, or machetes…attacking vessels during the night.”11 Derived from IMB statistics, the Allianz report also notes that in 2013 South Asia’s 26 incidents and Southeast Asia’s 128 combined to far outstrip Africa’s total of 89 incidents, with only 7 of the latter considered acts of Somali piracy.12

On the other hand, IMB’s April 2014 update demonstrates the fluid nature of piracy, stating only three years later that “attacks have dropped significantly in the vicinity off Anambas / Natuna / Mangkai islands / Subi Besar / Merundung area” and “dropped substantially” in the Strait of Malacca since 2005, although no such improvement is noted for the Singapore Straits.15 The year 2005 is significant as the year that Gerakan Aceh Merdaka (GAM) separatists and previous perpetrators of maritime assaults at the entrance to the Malacca Strait signed a post-Tsunami peace accord with the Indonesian government.16

The assets most at risk in Southeast Asia are in general not the more than 60,000 tankers and container vessels that ply the waters but tugs and other small vessels with low freeboards. Nonetheless, Erek Sanchez, a maritime security contractor, notes that insurance companies now require nearly all merchant vessels to “have a security team aboard or have a proven static anti-boarding mechanism that satisfies the requirements set by the insurance company,” meaning there is plenty of business to be had.

Adding to PMSCs’ potential in the region is the lack of enthusiasm for joint patrols by multinational forces in and around Indonesian waters due to sensitivity of competing territorial claims. While understandable from a sovereignty perspective, vessels must as a result rely on the prospect of the strengthening of individual naval forces or seek additional protection.

Although the majority of attacks in the region – whether at sea, at anchor, or in port – are short-run robberies, when hijackings do occur they are often inside jobs. An interesting variant on hijackings occurs in the Sulu Sea between rival fishing companies who “attempt to deplete the maritime assets and platforms of their competitors.”17 This points to another factor that might increase the region’s potential for PMSCs – that of maritime resource competition.

According to Rawley, “Poorly managed fisheries and maritime crime in SE Asia are inextricably linked. In the 1990s, over-fishing partially caused the loss of livelihood of coastal communities that contributed to the surge in piracy near Malacca. Southeast Asian countries that cannot afford adequate coast guards might reach out to NGOs or PMCs for fisheries enforcement patrols in their territorial waters.”

Taken together, the sustained incidence of piracy and robbery, especially near Indonesian waters, along with resource competition between companies, states, and fishermen indicates that there will be a ready market for PMSCs in the region for some time to come. In Part 2 I will look at factors that might lessen the need for or hinder the operations of PMSCs in South and Southeast Asia, as well as provide a brief outlook on their future uses in the region.

8 thoughts on “Whither the Private Maritime Security Companies of South and Southeast Asia?”