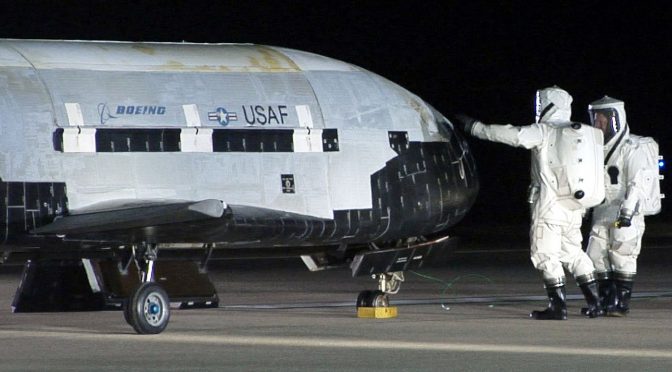 The last time Congress created a new military branch was in 1947 when they formed the Air Force out of the Army Air Corps. Now, several Congressmen want to create a new branch of the military: the Space Corps. However, when the House of Representatives passed the final version of this year’s National Defense Authorization Act (NDAA), now signed into law by President Trump, it addressed the controversial proposal in no uncertain terms:

Its proposer and strongest supporter, Representative Mike Rogers (R-AL), asserted that the Air Force has dropped the ball on space over the last two decades, allowing our adversaries to close the space technology gap with us. The only thing that could save us now was to create an entirely new branch of the military– The Space Corps– sharing a similar relationship with the Air Force as the Marine Corps has with the Navy.

To be fair, we do have a problem. Modern Air Force strategy has highly valued fighters and air attack. Accordingly, fighter pilots represent 31 percent of the Air Force General Officer leadership, to include six out of the fourteen top four-star officers (for comparison, Air Force Personnel Command reports pilots of ANY aircraft compose only 20 percent of officers). Officers in other fields (such as space) have historically not been promoted as frequently or highly. Additionally, sixteen years of combat operations under inadequate budgets have encouraged raiding the space funds of tomorrow to meet the mission requirements of today.

Most significantly, our adversaries have indeed enhanced many of their space capabilities to near-peer status. Recently, China tested quantum communication satellites, and Russia enthralled the Space community with maneuvering satellites that have unknown strategic intentions. Both countries, as well as the European Union, have launched their own navigation satellites to remove their reliance on the American GPS constellation.

1. Our adversaries have a vote on what their space capabilities are. Even with more focus on space, on what grounds were we to protest or prevent Russia from launching satellites? They have just as much right to the peaceful use of space as we do, and embarrassingly, we depend on them for all of our own manned space flight since the shuttle retirement in 2011.

2. We already have Air Force Space Command (AFSPC) Headquartered in Colorado Springs, it is run by four-star General John “Jay” Raymond. What would a Space Corps realistically do that AFSPC is not capable of doing? If Congress aims to get him a seat on the Joint Chiefs of Staff, it would be easier to amend Title 10 of the United States Code to make him a required consultant on all issues related to space, or change who he ultimately reports to. There is a precedent: that was the initial role the Commandant of the Marine Corps played before he was given a permanent seat. Such an amendment would also be far easier to implement than forming an entirely new branch.

3. A new military department will only complicate appropriations. Fiscal year 2009 was the last time Congress passed an appropriations bill for the Department of Defense before the actual start of the fiscal year. This has led to numerous continuing resolutions that Army Chief of Staff General Mark Milley called “professional malpractice” when he testified to Congress in April. Approaching a decade of indiscriminate budget cuts from sequestration, our forces are stretched thin. Congress proved this point on January 19th when they failed to pass the third continuing resolution for the 2018 fiscal year. The first two passed only hours before yet another government shutdown. When the third failed, the entire federal government shut down for almost three days until they ended it on January 22, with only another three-week stopgap passed. A new military branch would incur more redundant overhead. What makes Congress think that if we can’t afford to adequately fund space now, or anything else, we can afford it after we spend billions on a whole new branch?

The Space Corps idea received a cold reception from the Department of Defense from the start. Air Force Secretary Heather Wilson told Congress, “If I had more money, I would put it into lethality, not bureaucracy.” Her sentiments were seconded in separate testimonies by General John Hyten, the Commander of United States Strategic Command (USSTRATCOM), as well as General Raymond.

Secretary of Defense James Mattis also opposed it. While he has recognized that we need to update our approach to space, he believes no one has adequately argued that the Space Corps is the way to do it. It would only become another budget strain.

To the Air Force’s credit, they realized several years ago that they were dropping the ball on space. It is no accident that General Raymond, a man with a background in missiles and space, was put in charge of AFSPC. Backing him up as the Unified Combatant Commander over AFPSC, General Hyten also has significant space experience. He led AFSPC as its previous Commander and served as the deputy there before that.

Even though the final NDAA scrapped the Space Corps, Congress did make at least one critical change to benefit AFSPC. General Raymond’s job now comes with a minimum six-year term. This draws from the Naval Reactors model begun by Admiral Hymen G. Rickover, where the Admiral oversees the program for an eight-year term. This has contributed to the Navy’s consistently strong nuclear operational and safety record, and it will do worlds of good for the space program as well.

The Air Force has the right leadership cadre in place. It needs a chance for this reinvigorated command structure to succeed. Proposing the Space Corps did get the attention of all the right people, but it has more problems than solutions. The concept will likely keep reappearing every year for the foreseeable future, as several congressmen have alluded to. Will our military one day require a Space Corps? Possibly. But it is not today, and it is not next year. Killing the proposal now was the right call.

Scott Lassiter is a U.S. naval officer assigned to United States Strategic Command, and a member of the Navy’s Space Cadre.

The opinions expressed in this article do not necessarily represent the views of the United States Navy, Air Force, Strategic Command, or Department of Defense.

Featured image: US Air Force personnel examine the experimental orbital vehicle known as the X-37B after a successful landing at Vandenberg AFB in December 2010. (AP) 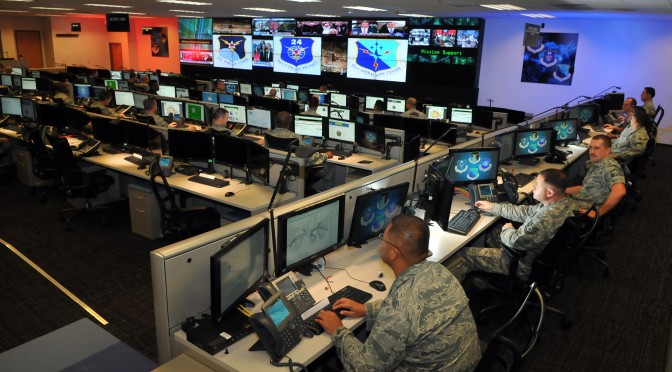 The US needs a Cyber Corps as a new Service to successfully meet challenges in the cyber domain, but almost as importantly, to harvest military talent in an innovative manner. And we have a blueprint in front of us.

The emergence and evolution of “cyberspace” as a warfare domain on par with the air, land, maritime, and space domains presents one of today’s fundamental military challenges – although cyberspace is somewhat awkwardly qualified as being “within the information environment.”[1] A new “front” in the cyberspace operations discussion continues to emerge as defense experts call for a separate cyber force, an idea raised notably by retired Admiral James Stavridis as one of his “heretical propositions on US defense policy[2]” and in recent Congressional testimony. With its own domain, acknowledged adversaries, and a continually increasing impact on warfighting, cyberspace should be the principal operating domain for a separate branch of the US Armed Forces, the US Cyber Corps (USCC).

To maximize the effectiveness of cyberspace operations (to include cyberspace attack and cyberspace counter-attack)[3], a service branch dedicated to and centered upon offensive cyberspace operations would lay the foundation to ensure warfighting success. The obvious historical analogy for the establishment of USCC is the evolution of the US Air Force (USAF), from its beginnings within the US Army to its designation as a service within its own department, including sharing responsibilities in the air domain with the other services. Post-World War II US military operations are difficult to re-imagine without the contributions of a military service primarily focused on the air domain – even if a separate air service seemed incomprehensible to military officers a century ago. However, USCC could have another historical precedent:  the Navy-Marine Corps relationship as two services within a single Department. Considering the evolution and broad nature of the cyberspace domain, the Department of the Air Force makes sense as the logical “umbrella” for both the USAF and USCC.

The principal advantages of establishing USCC as a Service within the Department of the Air Force include:

The new paradigm in personnel management presents perhaps the strongest argument for establishing USCC: providing this new service the latitude to recruit personnel using non-traditional methods and criteria, and then to develop them professionally to be, first and foremost, “cyber operators.” Specific opportunities include:

As an alternative to establishing the US Cyber Corps, US Cyber Command (USCYBERCOM) could become more like US Special Operations Command (USSOCOM), employing SOCOM’s unique model of Title X responsibilities and authorities mixed with service-supported personnel and acquisition systems.[4] Like SOCOM, CYBERCOM would exercise worldwide responsibilities, plan and execute its special mission sets in coordination with geographic Combatant Commands, and maintain strong roots in each of the Services. However, this enabling option would miss the key opportunity presented in the US Cyber Corps proposal; namely, recruiting, educating, training, and retaining skilled personnel outside the traditional military accession and promotion systems.

A principal argument against US Cyber Corps is that today’s fiscal environment cannot support additional costs in terms of “bureaucracy.” However, some savings and efficiencies can be certainly be realized by other services divesting some cyberspace responsibilities. Additionally, USCC would need far fewer bases, much less equipment and logistics support, and fewer personnel that its sister services. Training, education, personnel support, and infrastructure can be shared with other services, with much of the support coming from within the Department of the Air Force.

Returning to the historical analogy, the political and fiscal circumstances following World War II also presented a less than ideal time to create a new Armed Service. However, with opportunities and threats in the air domain, the National Security Act of 1947 created the US Air Force – a controversial step at the time that seems inevitable in retrospect. Today’s fiscal circumstances and operational threats echo those post-World War II concerns. Perhaps in 50 years the choice to dedicate a service to the cyberspace domain will also appear to have been self-evident.

Captain Donegan is a career surface warfare officer. A native of Hagerstown, MD, he graduated with merit from the United States Naval Academy in 1992 with a Bachelor of Science in History. He is also a graduate of both the American Military University with a Master of Arts in Military Studies (Naval Warfare) and the Naval War College. The views above are the author’s and do not represent those of the US Navy or the US Department of Defense.

Maj. Gen. David M. Edgington (USAF, Ret) joins us to discuss leadership and innovation through his work during Kosovo, the Surge in Iraq, and Air Force acquisitions.