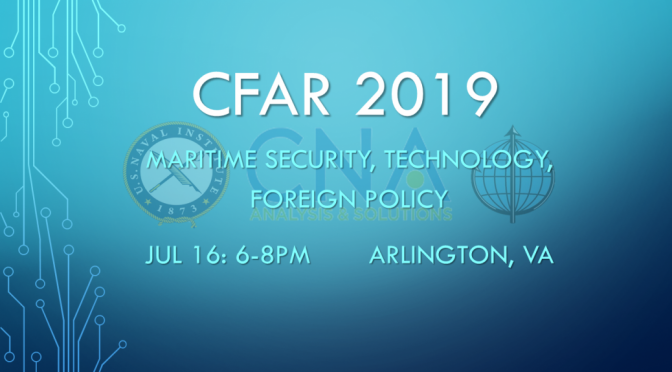 On July 16, 2019, the annual CIMSEC Forum for Authors and Readers was held at the Center for Naval Analyses in Arlington, VA. Readers were invited to nominate and vote on their top CIMSEC articles of the preceding year as well as studies by CNA scholars. The winners were invited to present on their articles, offer any updates, and field questions from the audience.

We thank the authors for their writings and presentations. Feel free to watch and read below.

The Case for Maritime Security in an Era of Great Power Competition – Joshua Tallis @ 26:15

Sea Control at the Tactical Level of War – Adam Humayun @4:30

Then What? Wargaming the Interface Between Strategy and Operations – Barney Rubel @ 42:00

The Nanxun Jiao Crisis and the Dawn of Autonomous Undersea Conflict by David Strachan (runner-up) @ 1:16:05

CIMSEC Category Winners Who Were Unable to Attend

The Deep Ocean: Seabed Warfare and the Defense of Undersea Infrastructure – Bill Glenney 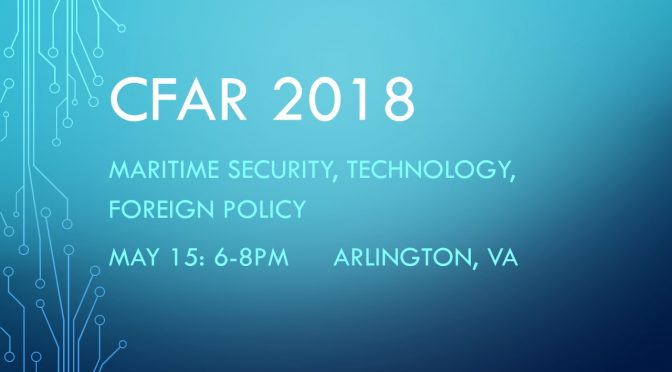 Thanks to the input of our readers we’re happy to announce the following nominations for CFAR 2018.  We need your help determining what authors and issues will be highlighted at CFAR 2018!  The authors of the top vote-getting articles will be invited to speak at the May 15th event on the article topic, so consider what you’d like an update on or what author you’d like to press with questions.  All CIMSEC members are eligible to vote.

If you’re not yet a CIMSEC member, it’s free and easy to sign up here for eligibility to vote.  And don’t forget to RSVP to the event!

As always, thanks to the generous support of CNA and our contributors for helping us bring you this event, and congratulations to the nominees!

Understanding the behavior of adversaries in the cyber domain can often be challenging. Attribution issues, the technical nature of cyberwarfare, its recent and rapid evolution, its ephemeral effects, and the covert ways in which it is often used tend to obscure the motivations and strategies of the actors involved.  This paper is an attempt to address these issues as they pertain to a particularly potent cyber adversary: Russia. Russia’s cyber capabilities are highly advanced, and Moscow has demonstrated a willingness to employ offensive cyber in situations other than war to affect political and economic outcomes in neighboring states and to deter its adversaries. To counter this strategy, U.S. policymakers and military planners need to understand how Russia integrates cyberwarfare concepts into its broader military and security strategies. This paper addresses this issue from a theoretical as well as a practical perspective, first by analyzing Russian doctrine and official writings and statements about cyberwarfare and then by examining how Russian cyber forces have operated in real-world scenarios.
https://www.cna.org/cna_files/pdf/DOP-2016-U-014231-1Rev.pdf

In November 2015, China publicly acknowledged for the first time that it is building its first overseas military facility in Djibouti, which is also home to the largest U.S. military installation in Africa. How did China come to establish its first overseas military support facility in Djibouti? What do we know about this facility and how it might be used, and what insights can we glean from the process to better understand where China’s military might go next? This paper provides a preliminary look at the origins of China’s military support facility in Djibouti. It explores the evolution of the economic and security relations between the two countries that led to the establishment of the facility, how it may be used, and what it may tell us about future Chinese military facilities abroad. It also assesses the implications of the growing economic and military ties between the two countries for the United States and the U.S. Navy.
https://www.cna.org/CNA_files/PDF/DIM-2017-U-015308-Final2.pdf

U.S. Navy planners should assume that the PLA Navy’s presence in the western Indian Ocean will grow, and that new bases and places will be organized to support its expanded presence. U.S. authorities can no longer assume unencumbered freedom of action when electing to posture U.S. naval forces offshore of the Horn of Africa and other East African hotspots. If China’s interests are involved and differ from Washington’s, the Chinese could dispatch their own naval forces to the water offshore of the country in question. The U.S. Navy faced similar circumstances between 1968 and 1991, when the United States and the Soviet Union competed for friends, political influence, maritime access, and bases in the western Indian Ocean region. This paper briefly discusses this period in order to provide some historical context for what might occur in the future. As Mark Twain purportedly quipped, “History does not repeat, but it often rhymes.”
https://www.cna.org/CNA_files/PDF/DOP-2017-U-015750-Final2.pdf

The Arctic Ocean is a vast maritime region which is bordered by six states that are now coming to appreciate their enormous hydrocarbon, mineral, and other natural resource potential as well as the use of the Arctic Ocean as a potential transit route from Asia to the points in the Atlantic in the U.S. and Europe.  Other states outside of the Arctic have also taken note of the Arctic’s vast and unexploited deposits, especially China. The report takes stock of the current foreign direct investment (FDI) patterns — at the transactional level — with a particular focus on Chinese activity. This study explores China’s current natural resource strategies and compares them to past FDI activities in South America and Africa. This study also makes detailed comparisons of the FDI laws of the six main states that border the Arctic Ocean. Based on the findings, the authors suggest three approaches that could be pursued independently or in tandem, to monitor and indirectly regulate inbound FDI. Regulation is highly recommended because unrestrained FDI can alter the political landscape in those areas (e.g., Greenland) desperate for foreign capital and can negatively impact the Arctic marine environment if extraction projects do not reflect state-of-the art technology or are properly bonded.   The approaches suggested include establishing a set of multilateral Arctic FDI review criteria administered by each nation; an Arctic Development Code; and the formation and funding of an Arctic Development Bank, which would provide private developers with access to local capital (vs. Beijing sourced) to finance infrastructure and resource extraction projects.

The Origins and Development of a Cooperative Strategy for 21st Century Seapower
Peter Swartz, William Rosenau, and Hannah Kates

This study describes and analyzes the origins, creation, announcement, and dissemination of the U.S. Navy–Marine Corps–Coast Guard Cooperative Strategy for 21st Century Seapower: Forward, Engaged, Ready (CS21R), published in March 2015. It also describes reactions to the document’s publication, and provides a series of conclusions, observations, and recommendations derived from the initial description and analysis. Its emphasis throughout is mostly on the Navy, although the document was a tri-service effort signed by the heads of the three U.S. sea services, with a signed preface by the U.S. Secretary of the Navy.
https://www.cna.org/CNA_files/PDF/DRM-2016-U-013939-Final2.pdf

NATO Maritime Strategy for a New Era: “These Aren’t the SLOCs You’re Looking For”
Steve Wills

Discussion surrounding the announcement of a new NATO Maritime Command for the North Atlantic seems to have settled on the assumption that there is again a vital “sea line of communication” (SLOC) between North America and Europe as there was supposed to be during the Cold War. There was a great deal of planning on both sides of the Atlantic for major reinforcement of NATO ground and air forces in Europe in the event of a Soviet invasion using convoys of supply ships, much as was done in the two previous World Wars. The Soviet Union had a large fleet of nuclear and conventional submarines and it seemed very clear that Soviet admirals intended to fight a third “Battle of the Atlantic” in the event of war to prevent Western resupply of NATO. However, this scenario bore no resemblance to what the Soviet Navy actually intended to do in case of war. Current geostrategic conditions and military force structure levels make a “fourth” such Atlantic convoy battle even less likely than was envisioned by many in 1985. The United States and its NATO allies and friends should carefully examine the current geography and force structure of the Russian Federation before embarking on another round of mirror-imaging of adversary intentions.

The Battle of Locust Point: An Oral History of the First Autonomous Combat Engagement – David Strachan

The Gate of Tears: Interests, Options, and Strategy in the Bab el-Mandeb Strait – Jimmy Drennan

Fighting for the Seafloor: From Lawfare to Warfare – Kyle P Cregge

Black Swan: An Option for the Navy’s Future Surface Combatant – B. A. Friedman

What the Loss of the ARA San Juan Reveals About South America’s Submarines – W. Alejandro Sanchez

Narco Submarines: A Problem That Will Not Sink – W. Alejandro Sanchez

The Navy Needs To Do More Than Rebuild For The Future, It Needs To Reinvent Itself – Frank Goertner 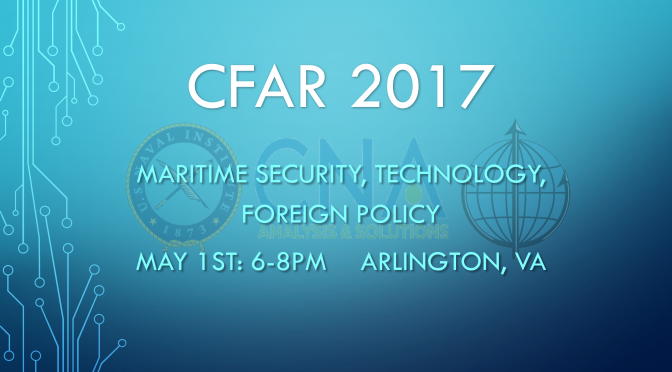 On  May 1 CIMSEC will host the third annual CIMSEC Forum for Authors and Readers (CFAR), an event for our readers and the public to engage our contributors on their work and topics of interest. Thanks to the generous support of CNA and the U.S. Naval Institute we are pleased to offer a professional workshop on a range of maritime security issues.

The evening will provide a chance to engage your favorite CIMSEC contributors on their work over the preceding year, hear their thoughts on how their pieces have held up, and explore predictions for the coming year. For the first time CNA will also participate in the proceedings (more on that coming soon).

Click here for information about applying for free CIMSEC membership

To RSVP to the event, fill out the form at this link. 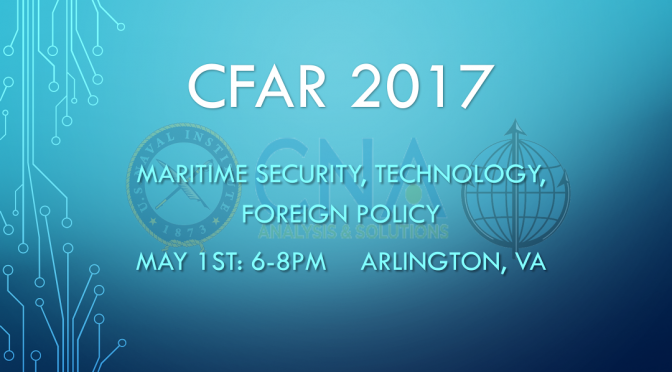 We’re happy to announce the following speakers for the 2017 CIMSEC Forum for Authors and Readers (CFAR) on May 1st, top vote-getters in their respective categories.  Congratulations to the authors, presenters, and all the nominees!