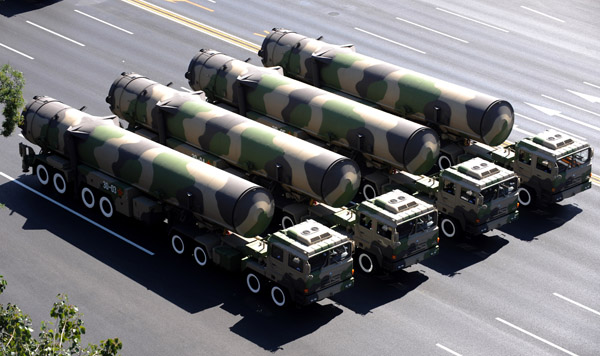 In a short article recently published by The National Interest, Xunchao Zhang argues that blockade is an effective means for the U.S. Navy to conduct a war against China because of its reliance on oil imports and then proposes that China has two options for countering a blockade strategy: vulnerability-reducing and conflict-avoiding. He dismisses the first because the Peoples Liberation Army Navy (PLAN) does not have the capacity to escort oil tanker convoys half-way round the world and China’s overland pipelines would be vulnerable to US strikes. Zhang therefore argues that a policy of avoiding conflict with the United States entirely is the only means for China to counteract a US blockade strategy. Key to this, he claims, is strengthening the Chinese nuclear deterrent and renouncing the No-First-Use policy. Only then will the Chinese nuclear deterrent be sufficient to prevent conflict with the United States and avoid a blockade which would likely be crippling. But this argument misses a fundamental point about deterrence and any US use of blockade in a war with China.

Deterrence is about avoiding war. Zhang argues that by strengthening the Chinese nuclear arsenal, the likelihood of war with the United States would decrease, thereby countering the threat of an American blockade. However, the United States is already unlikely to initiate a war, for numerous reasons. What Zhang calls China’s “minimal nuclear deterrent”, the possible world economic consequences, lack of domestic support for such an endeavor, and the historical unwillingness of the United States to be seen as the aggressor all combine to deter the US from attacking China. Any U.S.-China war would be initiated by China, and therefore a strengthening in the Chinese nuclear arsenal, to include abandoning No-First-Use, does not make a compelling case that the likelihood of war with the United States would be decreased. At best it would have no effect, and at worst it would put the Chinese leadership in a position where a stronger nuclear deterrent could simply increase the attractiveness of conducting a conventional war beneath the nuclear umbrella.

Furthermore, if a conflict-avoiding policy fails, an expanded nuclear arsenal would be useless in stopping the United States from imposing a blockade. Nuclear deterrence operates even in the context of war. It is unlikely that China would turn their nuclear weapons against the United States when under even a crippling blockade because the United States could respond overwhelmingly. A severe economic decline would be difficult to face, but nuclear weapons raining down on Beijing and Shanghai are on an entirely different plane. The incentive to not escalate to the point of nuclear warfare would be significant, and both sides understand this. The United States would have free reign to conduct the blockade without concern of nuclear escalation because of mutual deterrence.

Recent events support this view. In the context of the Ukraine Crisis, the United States has leveraged sanctions against Russia, which has the world’s largest nuclear arsenal, without fear of escalation. Another one or 10,000 Russian nuclear weapons would not change the fact that economic disruption is very different from physical destruction. If the possible effects of a blockade are as serious as Zhang argues, a strengthened nuclear deterrent is not the way to counter it.

Zhang is correct, however, to argue that China’s best way to counteract a potential blockade by the U.S. Navy is to avoid war entirely. Oil pipelines from Russia and Kazakhstan are highly vulnerable. Hitting fixed targets with precision weapons is a skill the United States military has very nearly perfected, with strikes this summer in Syria from carrier-based aircraft and Tomahawk-toting surface ships again proving the point. He also correctly assesses the PLA Navy as insufficient to protect its maritime trade routes. It has no experience conducting convoy operations and has limited, if slowly improving, antisubmarine warfare capabilities. Despite the effort expended to deploy a task force off Somalia, China does not have the capacity to support the number and array of forces necessary to defend its trade routes.

Furthermore, the geography of East Asia contains numerous maritime chokepoints, U.S. submarines are fast, quiet, and have incredible endurance, the U.S. surface fleet has decades of experience conducting maritime interdiction in some of the same waters it would blockade, and the United States has the ability to intercept maritime traffic far outside the range of PLAN capabilities, interdicting oil tankers at their source in the Persian Gulf. While Air-Sea battle in the face of A2/AD capabilities requires the development of any number of new weapons systems, the U.S. Navy has the capacity now and for the foreseeable future to cripple the Chinese economy in the event of war, at ranges far outside those of any existing or upcoming A2/AD capabilities. There is no simple panacea for China to overcome the threat of blockade in the event of war, but Zhang does get it right when he says that China’s best option is to avoid conflict entirely.

Ian Sundstrom is a surface warfare officer in the United States Navy and holds a master’s degree in War Studies from King’s College London. The views expressed here are his own and do not represent those of the United States Department of Defense.