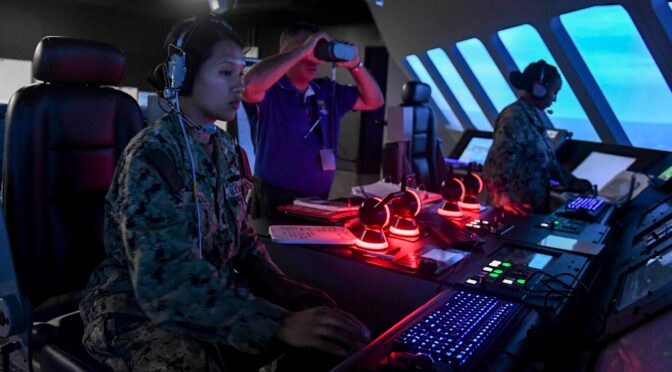 In recent weeks CIMSEC featured submissions sent in response to our call for articles on emerging technologies, issued in partnership with the Naval Warfare Studies Institute and Lockheed Martin, for CIMSEC’s Project Trident.

The evolution of technology has been a driving force in how naval forces are developed and employed. Technology has been central to defining how naval platforms can contribute to the fight, what systems can constitute a naval asset, and how sailors interact with machines to exercise naval power in all its forms.

Emerging technologies today constitute some of the greatest risks and most pressing opportunities that face naval forces. Artificial intelligence could transform the nature of naval command and control while augmenting what decision-making the warfighter can contribute to the fight. Autonomous undersea vehicles could broadly proliferate and pose widespread yet silent threats. Virtual reality could offer new avenues and methods of training warfighters and exploring future threat environments.

Amidst all this change, the pursuit of emerging technologies and the drive to harness their warfighting potential is characterized by competition. A range of actors and great powers are in an accelerating race to explore these technologies, capitalize on their supposed advantages, and be best prepared to employ or guard against them.

Below are the authors and articles that featured during CIMSEC’s Emerging Technology week. We thank them for their excellent submissions.

“The Influence of Technology on Fleet Architecture,” by J. Noel Williams

“It is critical that strategy-derived functions and missions, operating concepts to accomplish these missions, and technological opportunity guide the development of naval forces to realize a fleet fit for the purposes required by national, defense, and military strategies. Measuring the benefit of a new platform by comparing its performance to its predecessor or comparing a class of ship to an adversary’s like ship class does not answer the question.”

“Over the past decade, details have sporadically emerged about China’s unmanned (UUV) and autonomous undersea vehicle (AUV) projects, but questions linger about which kinds of vessels the Chinese defense industry may be developing, and how the People’s Liberation Army (PLA) might use them in a future conflict.”

“Our analytical models correctly identified the ground force’s intended movements in both scenarios. The ground force’s predicted path deviated from the actual path by an average of only 39 meters. The implications of these results are far-reaching as DoD begins to focus on competing with near-peer adversaries in the Indo-Pacific Theater, and the Marine Corps identifies the need for reconnaissance and counter-reconnaissance capabilities when conducting operations within the ‘weapons engagement zone.'”

“A Roadmap to Successful Sonar AI,” by LT Andrew Pfau

“Recently, NORTHCOM has tested AI/ML systems to search through radar data for targets, a project that has received interest and participation from all 11 combatant commands and the DoD as a whole. Due to its niche uses, however, passive sonar ML systems cannot match this level of department wide investment and so demands strong advocacy within the Navy.”

“Solving Communications Gaps in the Arctic with Balloons,” by Walker D. Mills

“Communications issues are a consequence of the polar operating environment and an obstacle for the military services operating there. But just because the environment is difficult does not mean that US forces have to go without persistent and reliable communications. High-altitude balloons could plug the communications gap not just for maritime forces but also for the Army and special operations units operating in these extreme latitudes.”

“In many cases, the human operators may be well-served with an automated decision support system that can quickly calculate preferred weapon options based on the situation, such as doctrine statements. The emerging capabilities of artificial intelligence can be leveraged to enable automated decision aids for laser weapons—thus creating a cognitive laser approach for laser weapon systems.”

“Responding to the Proliferation of Uninhabited Underwater Vehicles,” by Andro Mathewson

“UUVs are becoming an important tool within the realm of international security. Naval forces across the world are quickly developing and acquiring a variety of UUVs due to their furtive nature, dual-use capabilities, and multifaceted functionalities. While the technology is still in relatively early development stages and leaves much to be desired, UUVs have quickly become an integral element of modern navies but also appear in the arsenals of lesser developed armed forces and non-state actors due to their utility as an asymmetric tool for sea denial.”

“The Navy has monitored the temperatures and pressures of its fluid systems, and the voltage and current of its electrical ones, for literally centuries; the idea of doing the same for its people was a long time coming. To assess his alertness, J.T. then looks into the eyepiece of a Psychomotor Vigilance Self-Test (PVT) machine, pressing the mouse with each flash of light, speaking into the voice machine, and after three minutes is cleared, by a series of proven technologies leveraged together, to take the watch.”

“It is these two emerging technologies, maritime drone vessels and large satellite communication constellations, that could allow for the Navy to solve some of its ongoing issues and permit the creation of a more nimble, lean, and modern force able to better confront the rising security threats facing the United States in the years and decades to come.”

“Use Virtual Reality to Prepare Maritime Crews For Terrorist and Piracy Attacks,” by Selina Robinson and Dr. Amy Meenaghan

“The future of VR has a rightful place in maritime security. Already, the use of VR has been implemented by armies around the world who are able to train in battlefield scenarios and normalize high stress situations, whilst improving a range of fundamental skills from effective communications to critical combat techniques. In the maritime industry, the unexpected and ongoing attacks at sea require a different way of thinking and a different point of view on safety and procedures.”