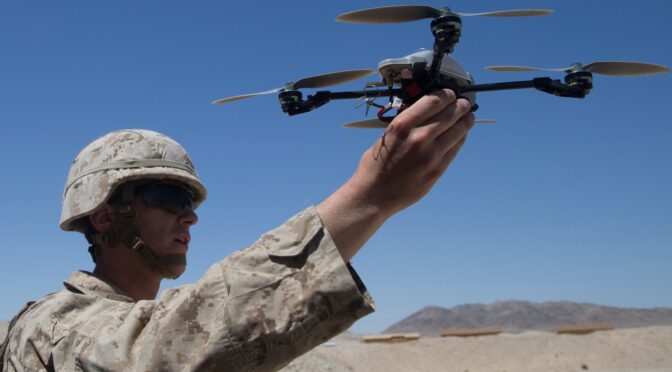 The U.S. Department of Defense (DoD) will increasingly employ unmanned, autonomous systems to support ground force operations.1 However, if an opposing force can track these unmanned systems, or identify patters in the systems’ behavior, it may be able to determine the location and intended movements of the ground force. In this article, we present an adversarial, or “red cell,” analysis of prior Naval Postgraduate School (NPS) work with an Unmanned Vehicle (UxV) Networked Control System (NCS) to determine if multiple, distributed, heterogeneous unmanned systems behave in a manner that may compromise the operations security (OPSEC) of a ground force.

A UxV NCS consists of heterogeneous agents, which include unmanned and manned systems, where each node has communications, sensing, and mobility capabilities and constraints. Research conducted at NPS by Lowry2 and Wachlin3 focused on a centralized and distributed adaptive submodular optimization approach to find near-optimal, near-real-time, position solutions for agents in an NCS. Their work has produced methodologies that can find near-optimal position recommendations—which optimize over system parameters, such as sensing and communication—to increase mission effectiveness. However, over time these recommendations can create predictable paths that may reveal the location and intended movements of a ground force.

Determining if this is the case requires two assumptions; paramount is the ability for the adversary to observe and collect position data about the UxV NCS. Our red cell analysis is based on a “worst-case scenario,” using data from a real-world experiment in which a network of autonomous vehicles supported a ground force. In this step, we assume the adversary has perfect information about previous force disposition, system configurations, and access to detailed training data, including time-stamped geolocation information that links the ground force to a UxV NCS. Our second assumption is that opposing forces will use Artificial Intelligence and Machine Learning Techniques to identify patterns in the unmanned systems’ behavior.

In November of 2017, NPS designed and conducted a Multi-Thread Experiment (MTX) series on San Clemente Island, which brought together faculty and students from across NPS, including the Center for Autonomous Vehicle Research (CAVR), Center for Network Innovation and Experimentation (CENETIX), Consortium for Robotics and Unmanned Systems Education and Research (CRUSER), and Joint Interagency Field Experimentation Program (JIFX), as well as fleet sponsors such as Naval Special Warfare (NSW), Commander, U.S. Third Fleet (COMTHIRDFLT), and Naval Information Warfare Systems Command (NIWC).

The experiment provided a platform to test the collaboration of a UxV NCS with manned assets (Figure 1). The scenario was built around an NSW team tasked with landing on San Clemente Island to conduct a direct action mission on a known target. The NSW team was supported by the autonomous systems to provide Intelligence, Surveillance, andReconnaissance (ISR) support, transportation, and battle-space awareness. The MTX generated a reliable dataset to test the hypothesis that an NCS generates predictable paths that could compromise the OPSEC of a ground force. Additionally, the scenario provides the opportunity to conduct a more robust analysis, as the NCS dynamically positioned itself to support the ground force.

Our analysis of the NCS utilized machine learning techniques to predict each autonomous vehicle’s path and the ground force’s path and target during the MTX. We further developed and applied a novel framework to automate the analysis of the NCS-generated data from all aspects of data science, including supervised and unsupervised learning. This framework establishes a foundation to automate future red cell analyses of NCS data, which could be later incorporated into the NCS methodology to improve the OPSEC of supported ground forces.

The framework consists of two independent models and a hierarchical model. The UxV Forecast Model conducts univariate time series analysis of the x- and y- coordinates, where the x and y values are generated for a localized grid coordinate system in a Northing Easting Down (NED) configuration and the point (0, 0) is based at lat-33.03191N, lon-118.60428W. This model builds twelve independent models and then forecasts each model a certain number of steps into the future. The output of the UxV Forecast Model creates the predicted locations of all NSC components.

The Ground Force Triangulation (GFT) model uses numeric regression techniques to calculate the ground force’s location as a function of UxV positions. The trained GFT model is then used in the time series regression model; the outputs of the GFT model are compared to the validation data to determine if the model is sufficient. The time series regression model combines the predictions from the UxV forecast model with the optimized model from the GFT model to generate the ground force’s predicted locations, which can then be compared against their actual positions.

The Unseen Data Set (UDS) was obtained from the research conducted by Lowry with a distributed submodularity. Lowry modified the data set, which we used for training our models to create a new ground force path, objective, and simulated UxV positions. We used the UDS to conduct our analysis from the perspective of an adversary that is observing autonomous vehicles and a U.S. Navy warship off its coast. The adversary previously obtained the MTX data sets and has two models which may be able to predict a ground force’s path, if one is present.

The right-hand image of Figure 2 compares the NSW team’s predicted and actual paths. What is most evident in this image is that the predicted path and the actual path are nearly identical. Over the 24-minute prediction horizon, the mean path deviation is only 39 meters; what is more impressive is that the largest path deviation occurs in the middle of the prediction space and is only 75 meters. The predicted NSW locations that occur after this mid-point converge back towards the NSW team’s actual path.

Our analytical models correctly identified the ground force’s intended movements in both scenarios. The ground force’s predicted path deviated from the actual path by an average of only 39 meters. The implications of these results are far-reaching as DoD begins to focus on competing with near-peer adversaries in the Indo-Pacific Theater, and the Marine Corps identifies the need for reconnaissance and counter-reconnaissance capabilities when conducting operations within the “weapons engagement zone.” Future analyses of this kind will be a valuable component in planning and executing missions involving ground forces supported by mobile networked control systems.

Maj. Larry Wigington is an operations research analyst for U.S. Marine Corps’ Manpower and Reserve Affairs. He previously served as Adjutant for the 26th Marine Expeditionary Unit and G-1 Operations Officer for 2d Marine Division. He earned a master of systems analysis and master of science in operations analysis at the Naval Postgraduate School, and a bachelor of science in criminal justice at Troy University.

Dr. Douglas Horner is a research assistant professor in the Department of Mechanical and Aerospace Engineering at the Naval Postgraduate School (NPS). He was a previously a naval special warfare officer (SEAL) from 1989-2001. A graduate of Boston University with a bachelor of arts in math and economics, Dr. Horner earned his PhD in computer science, master of science in applied mathematics, and master of arts in national security affairs at NPS. https://nps.edu/faculty-profiles/-/cv/dphorner