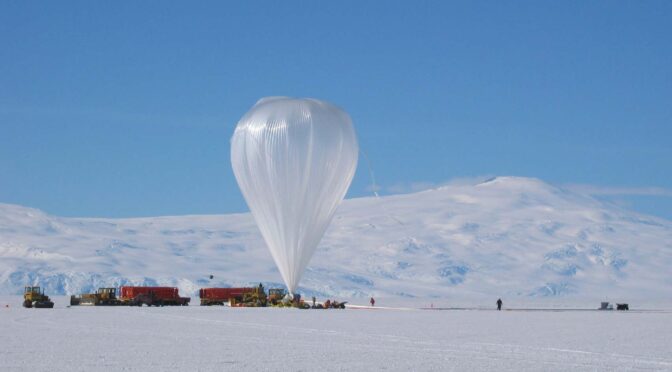 Defined by their remoteness and extreme climate, the polar regions present an array of tactical and operational challenges to US forces as sea icing, repeated thawing and freezing cycles, permafrost, and frequent storms can complicate otherwise simple operations. However, often overlooked are the challenges to communications, which are critical to Navy and Coast Guard vessels operating in the polar regions. Perhaps once possible to ignore, these challenges are becoming more pressing as the Marines, Navy and Coast Guard increase their operations at higher latitudes and place more emphasis on the arctic and more arguments are made for sending Marines and soldiers to the arctic for training and presence. In order for US naval forces to compete in the polar regions and fight if needed, the military needs to invest in persistent and reliable communications capabilities. One solution is high-altitude balloons.

Arctic experts have long understood the difficulty of communicating in the arctic, noting that “While communicating today might be easier than it was for Commodore Perry 111 years ago, it’s not that much better.” Arctic communications are especially difficult for a number of reasons. Satellite-based options are limited or nonexistent because the vast majority of satellites maintain equatorial orbits, which means the polar region’s extreme latitudes fall outside satellite range. Though a few satellites follow non-equatorial orbits, there are simply not enough to provide continuous connectivity at the bandwidth needed for modern operations.

There are also natural barriers to communications in the arctic. The ionosphere covering the polar regions has a high-level of electron precipitation, which is the same characteristic that produces the Northern Lights. However, this interferes with and degrades the high-frequency (HF) radios that the military normally uses for long-range communications in the absence of satellites. Additionally, the extreme climate and cold weather in the arctic presents another challenge to communications infrastructure such as antennas and ground stations. Arctic conditions make it harder to access and maintain ground arrays, batteries expire faster in colder temperatures, and equipment can easily be buried by falling snow and lost.

Finally, the near complete lack of civilian infrastructure complicates arctic communications. The polar regions comprise about eight percent of the earth’s surface, accounting for over 10 million square miles of land on which only about 4 million people live. Most are clustered in small communities, resulting in sparse commercial communications infrastructure across the region. However, persistent and reliable communications are absolutely essential for the successful employment of maritime forces in the arctic.

One solution is for naval forces to use high-altitude balloons that provide temporary communications capabilities. Balloons are far cheaper than satellites and much more responsive. They can be quickly deployed where coverage is needed and fitted with communications payloads specific to the mission. They are also low-cost and effective enough that they can be used not only in operations but also in training at austere locations.

Balloons offer a degree of flexibility critical for operations in remote environments like the arctic. Differently sized balloons can be fitted with specific capacities for mission-tailored      requirements and priorities. The size of payload, loiter time, and capabilities are primarily a function of balloon size. Large balloons and stratospheric airships can stay aloft for months, while smaller “zero pressure” balloons might last hours or a few days. Given their diverse uses and capabilities, high-altitude balloons have already been used to provide communications in hard-to-access environments by organizations such as NASA, the US Air Force, and Google. For example, researchers at the Southwest Research Institute and NASA have supported atmospheric balloon flights over the poles that lasted up to a month – more than enough time to meet operational needs.

Though there are various ways to launch and lift high-altitude balloons, recent advances show that hydrogen gas is the best candidate. Researchers at the Massachusetts Institute of Technology’s Lincoln Laboratory recently discovered a new way to generate hydrogen with aluminum and water. With this new ‘MIT process,’ researchers have already demonstrated the ability to fill atmospheric balloons with hydrogen in just minutes – a fraction of the time it takes using other methods. The MIT process promises to be not just faster, but also cheaper and safer than other methods of hydrogen generation. It also means that units can generate hydrogen at the point of use – obviating the need to store or transport the volatile gas or other compressed gasses. The researchers have demonstrated effective hydrogen generation with scrap and recycled aluminum and with non-purified water including coffee, urine, and seawater.

The deployment of balloons utilizing this new hydrogen generation process would be extremely simple. A balloon system could conceivably be developed where the system is simply dropped into the ocean from a ship, airplane, or helicopter with a mechanism that causes it to self-deploy when it comes into contact with seawater. This single system – one that does not require stores of compressed gas or an electrolyzer to generate hydrogen – would also take up far less space than other balloons and the associated equipment required to get them aloft. Balloons full of hydrogen gas could also act as giant batteries as the hydrogen can also be used to power communications equipment or sensors.

So far, the US Coast Guard has been leading the way with arctic communications. The service has highlighted improving communications in the arctic as part of their first line of effort in the 2019 Arctic Strategic Outlook and as a key initiative in their 2015 Arctic Strategy Implementation Plan. Along with the Marine Corps, the service has also been experimenting with Lockheed’s Mobile User Objective System (MUOS), a next-generation satellite communication constellation intended to replace the constellation that the Pentagon relies on today. But even the systems’ creators are clear that in extreme polar regions, MOUS may only offer eight hours of coverage per day. Constellations of small and cheap cube satellites might also be a partial fix for the communications dead zones, but hundreds or thousands would be required to cover a region as large as the arctic. The Army and the Air Force are also interested and intend to invest $50 million each toward arctic communications. The Army has previously experimented with using high-altitude balloons to support multi-domain operations and might be a key partner in developing an arctic communications capability, and the Air Force is looking at using commercial broadband satellites to meet service and joint communications needs in the arctic.

Walker D. Mills is a U.S. Marine Corps officer serving as an exchange officer in Cartagena, Colombia, the 2021 Military Fellow with Young Professionals in Foreign Policy, a non-resident WSD-Handa Fellow at Pacific Forum, and a Non-Resident Fellow with the Brute Krulak Center for Innovation and Future War.