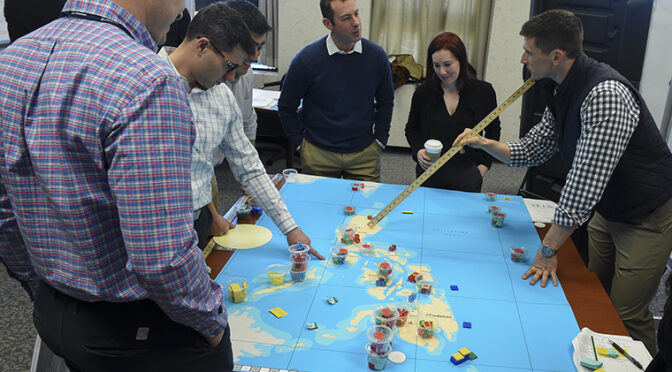 Intelligence is a key enabler of wargames conducted by the U.S. Department of Defense. Intelligence analysis provides the factual backbone of wargames, from orders-of-battle and weapons system capabilities to strategy. Intelligence analysts themselves routinely play the role of adversaries in so-called “red cells.” Often, however, wargame sponsors have specific training or analytic objectives that require deviations from the most likely or most realistic “red” courses of action. Intelligence analysts playing red must therefore guess at how the adversary might respond to unusual situations or deliberately make decisions they believe are inaccurate just to support the game’s purpose. This is a source of frequent frustration for analysts and the cause of numerous gripes about the “unrealistic” nature of wargames. Rather than decrying this, analysts should embrace this fact and use wargaming to improve their assessments.

Wargaming Is Distinct from Other Structured Analytic Techniques

Numerous structured analytic techniques have been developed to help intelligence analysts overcome their biases and improve their assessments. How is wargaming different and/or better than these techniques? Wargaming is unlike any other technique for its ability to put analysts in the adversary’s position and capture the interactive nature of warfare.

One common technique used to see the world from the adversary’s perspective is red team analysis. This technique involves analysts putting themselves in the adversary’s position and asking what factors influence its decision-making process and how it responds to different stimuli. In that way it is similar to the act of playing the red team in a wargame. Wargaming improves on red teaming by adding a thinking, reacting opponent, and repeating the process over the course of the game.

Wargaming also embodies the nature of warfare in a way that no other technique does. Wargaming captures the iterative interactions between the actors in a conflict. In this way it helps analysts see beyond the first order effects of any adversary course of action and identify how different actions might shape the future actions of the parties to a conflict. Wargaming also captures the sequencing of military operations in time and space. This helps illuminate constraints on military action that more abstract techniques do not.

Wargaming Can Enable Other Analytic Techniques

Wargaming can also enable the use of other analytic techniques. For example, wargaming can help check key assumptions. If an assessment depends upon an assumption that an adversary’s political leaders do not see war in their interests, analysts can put themselves in those leaders’ place in the context of a game and see if the assumption holds. When facing a thinking opponent on the other side of a wargame, that assumption might not seem quite as valid.

Wargaming can also increase the likelihood of capturing alternative assessments. If pressed, many analysts would reveal that they only consider alternative hypotheses at the end of their analytic process, contrary to best practices. Wargaming can help bring analysis of alternatives to the front of analysts’ minds because of its sequenced, iterative structure. Each turn in a wargame presents players with decision points, each of which can reveal plausible alternatives for consideration. Alongside these alternatives, wargaming can illuminate the indicators that would accompany an adversary’s choice of one course of action over another.

Each turn of a wargame further provides the context for a structured brainstorming session. The analyst or analysts on a team can employ the technique to identify the broadest range of possible actions an adversary might take and then consider which actions are supported by evidence, which are most likely, and which might be most dangerous to the United States.

Further, wargaming can help identify intelligence gaps. The key to developing valid analytic insights from wargaming is to try to bring intelligence information into the process. When facing an in-game decision, players should ask themselves “what intelligence reporting provides clues about how the target would react?” If there is no information available, a potential intelligence gap has revealed itself.

Wargaming Does Not Need to be Complicated

A common misconception of wargaming is that it requires complex computer programs or detailed map-and-counter systems with intricate rule sets. If it did, wargaming would not be well suited to the often fast-paced requirements of intelligence analysis. Fortunately, it does not. At its most basic level, wargaming requires no formal tools. It just requires players representing the various people or organizations under consideration and an umpire to decide the order and outcomes of actions. A slightly more sophisticated game could involve a map (perhaps simply taken down from the wall of a cubicle), pocket change used to represent various forces, and some simple rules to help adjudicate results. A wargame can easily be held in a conference room or clustered around a desk and completed in an hour or two. That may seem like a long time to commit to a “game,” but most analysts can tell horror stories about much longer meetings with less useful results.

Options for Increasing the Use of Wargaming in Naval Intelligence

Diversity amongst the naval intelligence analytic corps is key to avoiding blind spots and preventing groupthink. Important in building a diverse workforce is hiring analysts who have no military experience. This means, however, that naval intelligence leaders cannot assume these analysts have any particular knowledge of military operations. As part of new analyst training, wargaming can help improve their knowledge in a way that lectures and reading cannot by forcing analysts to engage with the factors that influence real-world military decisions, such as movement, fires, and logistics. Wargaming has already been implemented as a training and educational technique within the Department of the Navy and has been used in a limited scale within some components of the Defense Intelligence Enterprise, but its use could be expanded.

Analysts can also add wargaming to the toolbox they use in their daily work. As noted earlier, wargaming does not need to be complicated. Small groups of analysts can gather around a map on a conference table and, with post-it notes and notepads, examine how a specific battle, campaign, or war would play out in a structured but dynamic way. The insights from that effort can then help guide collections or generate new questions for analysis.

On a larger scale, wargaming can be a key facilitator of improved collaboration with the broader intelligence community. Naval intelligence analysts develop networks of their peers and routinely coordinate their formal products across communities of interest. This is important, but the former is often ad hoc and personality driven, and the latter is too often fleeting. Large, cross-organizational wargames can bring analysts together for multiple days of in-depth wargaming, during which time they get to know one another, discuss existing intelligence reporting and outstanding intelligence gaps, and explore various avenues for analysis. The experience can help foster deep and long-lasting relationships across organizations.

The Time is Ripe for Expanding Wargaming’s Role

Under guidance issued by the current Chief of Naval Operations and Commandant of the Marine Corps, wargaming’s time seems to have arrived in the Department of the Navy. Wargaming has been widely employed as a tool to train Sailors and Marines and develop new concepts of operations for naval forces. It should also be used by naval intelligence professionals to improve their analysis. Wargaming is a unique tool that can help reveal potential adversary courses of action and facilitate the use of other analytic techniques. It is time to add it to the analysts’ toolbox.

Ian Sundstrom is an intelligence analyst at the Nimitz Operational Intelligence Center. He is also a reservist at Naval History and Heritage Command and previously served on active duty as a Surface Warfare Officer. The views expressed in this article are those of the author and do not necessarily reflect the views of the Department of the Navy or the Department of Defense.

3 thoughts on “Wargaming: A Tool for Naval Intelligence Analysis”