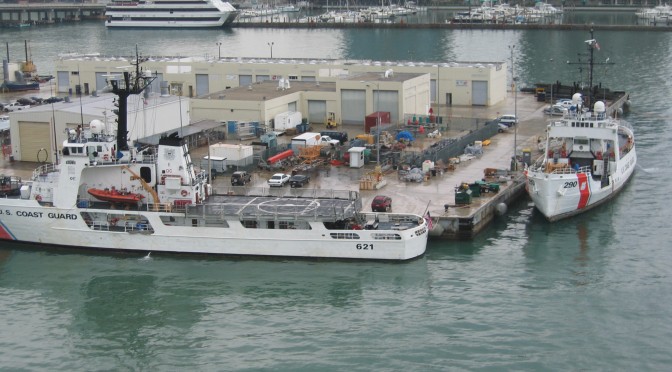 Congress attempted to address this perceived mismatch in the Homeland Security Act of 2002 by requiring an annual report of resources allocated to DHS missions and non-DHS missions, to ensure non-DHS missions are not ignored. I will refer to this “Annual Review of  the  United States Coast  Guard’s  Mission  Performance” (pdf) as the Performance Report.

It is an interesting report, but it does have significant weaknesses, largely stemming from the use of undifferentiated and undefined “resource hours” as a measure of effort. I reviewed a report back in 2010 and offered my criticisms, which have not changed here, here, and here.

Unfortunately, I think this report may be part of the problem, in that it defines several Coast Guard missions as “non-DHS,” and it gives the impression, erroneously I believe, that roughly half of the Coast Guard’s budget goes for things outside the DHS charter.

But these distinctions are fallacious.

The Department views its own missions as:

NON-DHS MISSIONS: All these missions, at least in some respects, support DHS missions.

SAR: A robust SAR organization is clearly a necessary foundation for “Ensuring resilience to Disaster.” What were Katrina and Sandy but huge SAR cases? SAR command posts and communications are the skeletal structure upon which Disaster Response is based. After all, every SAR case is really a response to a disaster of some dimension. If the 3,000 plus people the CG saves every year had died in a single incident, it would have been a disaster on the order of 9/11.

AtoN: Most of the population lives near the coast or inland waterways. Most depend heavily on marine transportation and in many cases fishing. When there is a disaster, restoring safe navigation is a high priority both for bringing in assistance and for recovery.

Marine Environmental Protection (MEP):  The Deepwater Horizon was a disaster. MEP regulation attempts head off disasters and mitigate its effects, that is “ensuring resilience to disaster” plus offshore and port-side energy infrastructure are potential terrorists targets.

Marine Safety: Marine Safety is designed to prevent marine disasters. A sunken cruise ship could be a disaster on the order of 9/11. Marine Safety standards tends to mitigate the effects of a terrorist attack on marine targets

Living Marine Resources: Destruction of valuable marine resources can actually be as disaster for the economy of some communities.

Ice Operations: Domestic icebreakers can prevent flooding. We recently had a case where a community in Alaska would have been left without fuel, if an icebreaker had not opened a path for delivery.

THE NON-DHS DHS MISSIONS: Two missions listed as DHS missions in fact are of little interest to the department, and performance goals (which are themselves perhaps inadequate) in these two areas are not being met.

Defense Readiness: Apparently the Coast Guard is doing more for Defense Readiness now than it was before 9/11, but really little has been done in terms of adapting resources for wartime roles. Additionally, a potentially major Coast Guard contribution to defense readiness, the major cutters, are being replaced at such a slow rate, the fleet continues to age, making it less reliable.

Other Law Enforcement (primarily foreign fisheries): DHS probably has little interest in this. This mission also suffers from the aging of the cutter fleet, and additionally the very large US EEZ in the Western Pacific has been largely ignored.

Problems in DHS: I do think the Departments placement of priority on counter-terrorism over more general disaster response is misplaced,  and this is another source of problems.

I will quote my closing paragraph from my 2010 post,

When it comes time to decide the Coast Guard budget, I would suggest Congress take a different approach. Consider return on investment. If you like the return you are getting from the Coast Guard now, invest more.  Don’t say, “Agency ‘X’ isn’t working, we need to put more money into that.” “The Coast Guard, is doing a good job with their current budget so we don’t need to give them any more.” I don’t quote scripture very often. I’m not religious, but there is some wisdom there. Check out the story of the “good and faithful servant” Matthew 25:14-30.