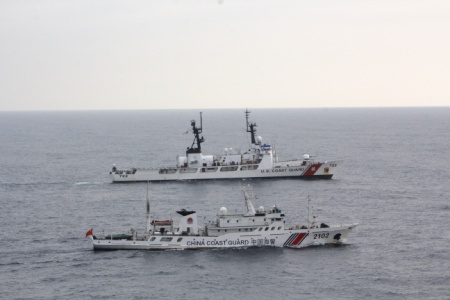 Given shrinking global fleets and growing seaborne challenges, the United States has embraced security cooperation to augment its own force to improve maritime security around the world.[1] The country looks to its partners to address sub-national and transnational actors who generate maritime insecurity. As such, the U.S. builds global maritime partnerships to respond to piracy, illicit trafficking, and other illegal activities to protect important sea-lanes. And where limited capacity exists, the United States helps to build national capabilities with new countries such as East Timor, post-conflict countries such as Liberia, or long-time allies such as the Philippines.

This effort to build global maritime partnerships is not new. A decade ago, Vice Admiral Morgan and Rear Admiral Martogolio wrote, “policing the maritime commons will require substantially more capability than the United States or any individual nation can deliver.”[2] This thinking underlies the tri-service maritime strategy signed by the Coast Guard Commandant, Chief of Naval Operations, and Commandant of the Marine Corps. The strategy called for fostering critical relationships overseas, screening ships bound for our ports, and responding to threats approaching our coastline.[3] To be effective, the partnerships include navies, coast guards, commercial shipping companies, and port operators. This is logically based on the importance of seaborne trade, the size of the world’s oceans, and interconnectedness of the maritime transportation system.

There is renewed interest in protecting the maritime commons. The United Nations General Assembly is “concerned that marine pollution from all sources, including vessels and, in particular, land-based sources, constitutes a serious threat to human health and safety, endangers fish stocks, marine biodiversity and marine and coastal habitats and has significant costs to local and national economies.”[4] Many countries lack the resources to protect their fisheries and enforce environmental laws giving rise to security deficits on the seas. This lack of government presence further enables criminal groups to traffic drugs, people, and weapons. They thrive in the vastness of the oceans and relative lack of maritime domain awareness or response capabilities in most of the world. The result is that Mexican and Colombian drug trafficking organizations generate, remove, and launder between $18 billion and $39 billion in wholesale drug proceeds annually.[5] These groups use the profits to equip themselves with the latest equipment and employ various means such as semi-submersible vehicles, which challenge governments’ abilities to interdict.

To meet these challenges, partners generate demands for U.S. assistance. When the Caribbean was identified as America’s third border, for example, the Caribbean Community and the Dominican Republic “recognize[d] the importance of close cooperation to combat new and emerging transnational threats that endanger the very fabric of our societies.”[6] U.S.-Caribbean engagement programs are designed to enhance cooperation in the diplomatic, security, economic, environmental, health and education arenas. Through the Central American Regional Security Initiative, for example, partner countries supported 67 percent of illicit trafficking disruptions in 2012.[7]

For the United States, the global illicit drug trade is a significant transnational security threat that undermines democratic governments, terrorizes populations, impedes economic development, and hinders regional stability. The UN Office of Drug Control and Crime Executive Director Antonio Maria Costa warned that, “States in the Caribbean, Central America and West Africa, as well as the border regions of Mexico, are caught in the crossfire between the world’s biggest coca producers, the Andean countries, and the biggest consumers, North America and Europe.”[8] This formulation places Caribbean countries as victimized bystanders to a Yankee drug problem[9], but the State Department recognized that this view is changing and partners see drug trafficking as a shared problem in that “We all face a thinking, well-financed enemy and we must all, every legitimate nation-state and international authority, work together to thwart this network.”[10]

Indeed, there is a shared insecurity enabling cooperation on shared challenges like transnational organized crime. But this has not been easy. Drug traffickers successfully exploit weak security institutions and take advantage of political tension created by U.S. drug policy and declining presence. The challenge for the United States, however, is to build renewed relationships without overwhelming these countries with its military and law enforcement efforts. With its intervention history and large size, the U.S. military too easily scares its partners. The U.S. Marine Corps, for example, is larger than almost every country’s military in the Western Hemisphere and Africa. Further, a slowing defense budget is reducing military deployments in the Western Hemisphere where the Coast Guard already supplies the bulk of ships and aircraft to disrupt drugs bound for the United States.[11]

Maritime security cooperation can offset U.S. absence and empower its partners. Under international law, countries have basic obligations under the International Convention for the Safety of Life at Sea Convention, International Convention for the Prevention of Pollution from Ships, and the UN Convention on the Law of the Sea. These laws form the basis of partnerships as countries seek to prevent security incidents on ships and in ports through the International Ship and Port Facility Security Code.[12] And trust can be reaffirmed through programs like the Proliferation Security Initiative and the Container Security Initiative to reduce illicit trafficking. While countries ratify these agreements, they often lack the maritime capability and capacity to patrol their waterways, ports, and territorial waters.

Given its history, law enforcement capabilities, and place in the federal government, the U.S. Coast Guard is well-positioned to build partnerships and promote maritime security. Under Title 14 of the U.S. Code, the Coast Guard has jurisdiction both in territorial waters and on the high seas. As the service responsible for protecting U.S. ports and its lead responsibility for maritime drug interdiction, the Coast Guard has the expertise and experience to work with maritime partners around the world. While the Coast Guard has no independent funding authority to conduct security cooperation, it can draw program support from the Foreign Assistance Act and Section 1206 of Title 10, which provides funding for international education, training and equipment.

The Coast Guard provides international education at its Academy and technical training through its various schools. New London counts 114 international cadet graduates since 1971, while schools and mobile training teams train thousands of students annually from more than 80 countries.[14] In support of U.S. embassies around the world, the Coast Guard conducts boarding officer training, engages with maritime police, and trains search and rescue personnel so countries can meet their international legal obligations. International coast guard officers also attend DOD-funded schools such as the US Naval War College, where it can count among its alumni the current heads of coast guards in Bangladesh, Belize, Cape Verde, Jamaica, and Seychelles.

Augmenting military training and education is the FMF program that supplies grants and loans to finance American weapons and military equipment purchases. Working with allies and partners, the United States seeks to develop regional capabilities to protect trade, natural resources, and economic development. This includes establishing maritime domain awareness through the automated identification system, an array of coastal radar systems, and improved command and control. Most countries lack significant maritime capacity to protect their territorial waters let alone their Exclusive Economic Zones. Nigeria, for example, which is the largest country in sub-Saharan Africa, counts about 7,000 maritime enforcement personnel with several offshore patrol vessels to include former US Coast Guard cutters Gallatin and Chase. More broadly, the Coast Guard supported delivery of over 300 vessels and trained the crews of 56 countries.[15] Through FMF, excess defense articles programs, and other authorities, the United States transfers weapons to increase maritime capacity.

To be sure, the United States has a long history of global presence and supporting almost every country in the world. Fiscal austerity is likely to restrict this presence, yet security cooperation can offset U.S. assets through U.S. partners. As my colleague Ivan Luke has written, “strategists and practitioners will need to be smart about how they approach peacetime missions.”[17] With growing international trade and security deficits, the Coast Guard’s unique civil-military blend makes it an ideal service to conduct maritime security cooperation.

Derek Reveron is a professor of national security affairs and the EMC Informationist Chair at the U.S. Naval War College and author of Exporting Security: International Engagement, Security Cooperation, and the Changing Face of the U.S. Military. These views are his own.