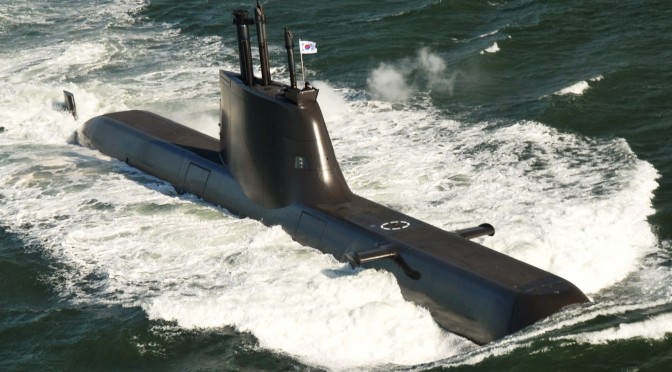 One of the curious aspects of the debate over Air-Sea Battle has been that the arguments taking place often dwell not on substance, but on definitional disagreements. For example, one side will critique ASB out of concerns of strategy or the nature of our relationship with China; the other side will rightly complain that these concerns belong in a separate, well-deserved debate because ASB is an operational concept, not a strategy. CIMSEC has commissioned an entire week on ASB in the hope that we can move past this inescapable logic-loop. On that note, I recently came across two pieces (both published journal articles) that are stand-ins for where we do and do not want this debate to go.

One is a recent article published in the journal Military Review, entitled “A Role for Land Warfare Forces in Overcoming A2/AD,” written by COL Vincent Alcazar and COL Thomas Lafleur, formerly Air Force co-lead and Army strategist for the Air-Sea Battle Office, respectively. Sounds promising! Unfortunately, what followed was a jargon-laced, logically questionable, and utterly indefensible article. In a sentence, they argued that ASB is not sufficient to meet the A2/AD challenge of the future. Instead we should land a Brigade Combat Team on the soil of our future putative enemies to conduct reconnaissance, raids, and seizures of key A2/AD capabilities. What an incredible argument! Without any reference to actual scenarios, concrete adversaries, or political costs this is not just a useless argument, it is a dangerous one, because someone somewhere out there might actually take it seriously. Beyond substantively bad ideas, this article is also marred by poor writing. For example:

Land warfare forces are not an invasion or long-term occupation force, or utilized as the vanguard of a nation-building effort; even “kicking in the door” comes later. Early land warfare force employment against A2/AD is about tailored BCTs and slices of BCTs that enter the neighborhood to shape its places for the joint force subsequently to kick in the doors to the key houses, which themselves constitute key opponent targets. (p. 80)

If you can understand that, I’m not sure I can congratulate you. The entire article reads like this. A final problem is that the article bizarrely confuses strategy, operations, and tactics. One choice quotation: “Nations employing A2/AD have four goals; however, it is inaccurate to conflate these ‘goals’ with ends. Rather, these goals are considered a framework to explain the strategic and operational so what of A2/AD.” (ital. original) (p. 82-83) How are the authors distinguishing “goals” from “ends?” How can you even talk about strategy without referring to specific countries? What does the term “so what” mean? In sum this article indicates to me that even within the ASBO itself people are still confused over definitions, and basic logic. Pardon the overwrought nautical metaphor, but it does not instill in me much confidence that the ship is being steered in the right direction.

Striking a completely different tone, Jonathan Solomon’s recent article published in Strategic Studies Quarterly, “Demystifying Conventional Deterrence: Great-Power Conflict and East Asian Peace,” was a tour de force. Even though I do not necessarily agree with his conclusions, Solomon expertly defends the necessity of Air-Sea Battle and long-range conventional strike systems through a clear and logical (if dense) elucidation of conventional deterrence theory. He also makes criticisms of blockades that proponents of competitors to ASB, like Offshore Control, must contend with: that over-land blockade running or rationing could thwart a blockade; that a blockade might harm third-party allied countries; and that an adversary could put the US in a situation where it had to choose between further escalation or compromising the integrity of the blockade.

But I still have issues with an article even as well written as this. First, the author is largely talking about an “end of the world” scenario in which China initiates a premeditated first strike a la Pearl Harbor. Solomon spends comparatively little time addressing lower-order conventional deterrence/crisis escalation scenarios, except to say that high-end conventional deterrence is still useful between levels of escalation and that U.S. and allied constabulary functions are still necessary. While some argue that China has an incentive in certain situations to conduct a preemptive strike, it seems likely that such a strike would come in the context of an ongoing political crisis rather than as a bolt out of the blue attack. In this case, lower-end deterrence (defusing the crisis) would be more important than higher-end deterrence.

Second, Solomon intelligently lays out example after example of how both conventional and nuclear deterrence could fail due to strategic misperceptions, psychological issues, China becoming more volatile, and the U.S. fiscal situation weakening, etc. But then he pins the solution on confidence-building measures and multi-track diplomacy. But what happens when multi-track diplomacy does NOT work and China continually rejects confidence-building measures? I am actually one of the biggest proponents of Sino-U.S. mil-mil cooperation, but I am NOT confident that, as Solomon puts it, the United States and China “educate” each other about “their respective escalatory threshold perceptions.” (p. 133)

This is why it is important to craft a more conservative deterrence policy that does not depend on having perfect knowledge of the adversaries’ intentions, doctrine, strategic culture, or leadership psychology. As is well documented by history, intelligence has often been catastrophically wrong, and signaling has been imperfectly interpreted or outright failed—such as the fine-tuned signaling intended by U.S. strategic bombing during the Vietnam War, or when the United States thought it was fighting an anti-communist war in Vietnam while the Vietnamese thought they were fighting a nationalist and anti-colonialist war. We absolutely must try to increase transparency and mutual understanding, but we also have to be aware that we could fail, with catastrophic results. It seems as if Solomon is well aware of these issues, but at times he contradicts himself; there is even one section where he suggests “overt, predeclared ‘automaticity’ in [the] deterrent posture,” which clashes with his warnings against misperceptions, etc. (p. 136)

Finally, the author rightly points out that a Chinese first-strike would inflame the Clausewitzian passions of the U.S. and allied publics and would provide a psychological boost to our side. Why then wouldn’t U.S. retaliatory strikes against mainland targets (even if they are only against counterforce targets) not inflame the passions of the Chinese public, making de-escalation on the Chinese side that much more difficult? We have ample evidence of the nationalist sentiments of the Chinese public, and the below-the-surface antipathy towards the United States that could erupt (e.g. the Belgrade embassy bombing). CCP leaders could fear popular revolt if they capitulated, even if they understood themselves to be in a long-term losing situation. The CCP’s interest in maintaining their leadership position may not be the same as China’s national interest. That is a scary thing to consider.

These two articles seem to strike out two different future intellectual trajectories for the military and our national security apparatus. In one, alternative strategies are debated with an eye towards academic theory, well-informed history, and sound logic. In the other, a gob of reheated mush is coated in incomprehensible jargon and delivered to us as “fresh thinking.” Which direction do we want to go? We can have intelligent or unintelligent debates about ASB. The choice will directly influence our national security, and whether we stumble into yet more undesired wars or keep an uneasy peace. It is my hope that this week at CIMSEC will steer us in the right direction.