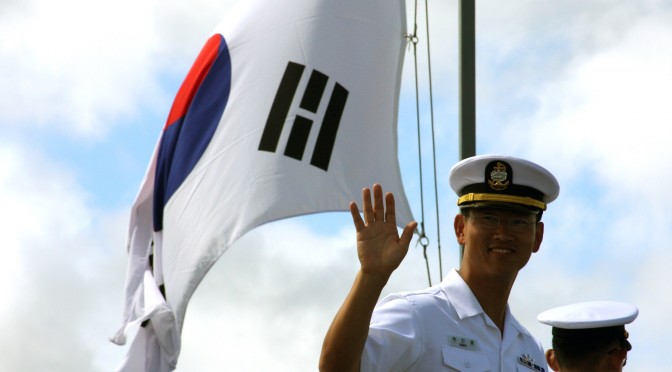 Defence Reform Plan 2020 (DRP2020), originally set out in 2005 by the Republic of Korea’s (ROK) Ministry of Defence, presents an ambitious vision for future military capabilities. For the Army, this will mean personnel reductions – specifically a total drop in troop strength from 690,000 in 2005 to 500,000 by the end of 2020 – in an effort to promote a more modern, professional force. For the Republic of Korea Navy (ROKN), meanwhile, this has meant a shift in the focus of procurement projects so as to attain the status and prestige of a ‘blue-water navy’. In other words, the ROKN will seek expeditionary capabilities, operating across the deep waters of the open oceans, rather than concentrating on its traditional role of securing South Korean littorals against intrusion by the military forces of the Democratic People’s Republic of Korea (DPRK) or foreign fishing vessels.

But is such a shift from a green-water navy to blue-water possible? Furthermore, is it desirable, given the ROK’s strategic situation? To understand the evolution of this still relatively young navy, it is worthwhile consulting a resource compiled by another regional partner. Particularly valuable insights can be found in a paper produced for the US Naval War College in 2010, entitled “The Emerging Republic of Korea Navy: A Japanese Perspective,” by (retired) Vice Admiral Yoji Koda, who formerly served as the Commander-in-Chief of the Japan Maritime Self-Defence Force and interacted considerably with his ROKN counterparts from 1997 onward. VADM Koda briefly charts Korean naval history, starting from actions of Yi Sun-shin at the Battle of Myeongnyang in 1597 that thwarted a Japanese invasion, but his accounts of force modernization and expansion efforts by the ROKN since the 1990’s are the most detailed sections of the paper and will be of most interest for readers wanting to know what role the ROKN might play in the increasingly complex security order of the 21st century Asia-Pacific.

VADM Koda highlights two concerning capability gaps faced by the present-day ROKN: anti-submarine warfare (ASW) and mine countermeasures (MCM). On the first point, although the ROKN maintains a robust force of fast patrol craft to counter clandestine intrusions by North Korea, “the ASW posture of the ROKN still remains questionable today, in relation to the perceived threat of North Korean submarines and the geopolitical nature of the country.” Despite evidence suggesting that the Pohang-class corvette ROKS Cheonan was sunk in March 2010 by a torpedo launched by a North Korean submarine, there have been no compelling efforts by the ROKN to shore up its ASW capabilities. Perhaps the only saving grace for ROKN ASW has been, according to VADM Koda, the acquisition of three ASW-capable Gwanggaeto the Great-class destroyers in 1998-2000 and a small fleet of Westland Lynx helicopters. Though the ROKN is not without its own submarines – specifically four Sohn Won-yil diesel-electric submarines and nine Chang Bogo-class diesel-electric submarines – these are geared toward anti-surface warfare (ASUW).

The ROKN’s MCM capability has also been diminished by the decommissioning of coastal minesweepers donated by the United States following the Korean War. At the time of VADM Koda’s writing, the ROKN minesweeper fleet consisted of only three Yangyang-class coastal minesweepers and six Swallow-class coastal minehunters, which he deemed “not yet sufficient for the current security and military situation around the peninsula”. However, the ROKN seems to have recognized this vulnerability to the DPRK’s own doctrine of asymmetric warfare; in 2015, the ROKN launched the first vessel of the Nampo-class, a domestically built minelayer, and plans are in place to produce several new minesweepers based on the design of the Yangyang-class in the coming years. Even so, the ROKN could not solely carry out an MCM role in a future conflict on the Korean Peninsula – VADM Koda identifies the Tsushima Strait as vital to the logistics of any multilateral response to North Korean or Chinese aggression against the South. Unfortunately, no formal agreement currently exists between the Japanese and ROK authorities about conducting combined military operations, which would be crucial to ensuring a clear division of labour on MCM, with the ROKN securing the western end of the Tsushima Strait and the Japan Maritime Self-Defence Force (JMSDF) locking down the eastern channel. This stems from several ongoing political disputes between Japan and the ROK, including the status of Tsushima Island (known as Daemado Island in the ROK). The dispute over the island has persisted since 1948 and shows little sign of reaching a final resolution.

The ROKN has demonstrably obtained blue-water capabilities. As the paper notes, ROK President Lee Myung-Bak approved the establishment in 2009 of the Cheonghae Anti-Piracy Unit and its deployment to the Gulf of Aden in support of Combined Task Force 151. A few months later, the ROK joined the Proliferation Security Initiative. New, domestically built surface combatants, such as the Sejong the Great-class destroyers and Incheon-class frigates, possess impressive capabilities and the capacity to project South Korean power beyond the country’s coastal waters. The ROKN has also succeeded in expanding its amphibious capabilities, particularly through the commissioning of its first Dokdo-class amphibious assault ship in 2007 and the replacement in 2014 of aging US-transferred landing ships with the new Cheon Wang Bong-class. VADM Koda interprets this interest in amphibious capabilities as a reaction to the “bitter experience” obtained when the ROKN “found itself unable to participate sufficiently in the multinational relief operations on northern Sumatra, in Indonesia, after the earthquake and tsunami in December 2004”.

In short, while the paper cites ample evidence to believe the ROKN is on course to become a blue-water navy (and perhaps already has), the country’s policymakers and defence planners should pay more thought toward the objectives they wish their maritime forces to fulfill. Boasting the blue-water label and participating actively in humanitarian operations abroad may benefit national prestige, but North Korea remains a paramount security threat. It is clear that the ROKAF assesses its own capabilities as so vastly superior to their DPRK opponents that another attempted invasion of the South would be impossible, and this can be seen in the ROKN’s focus on the quality of landing craft over quantity. But the sinking of the ROKS Cheonan demonstrates that the ROKN ignores ASW and MCM capabilities at the peril of its brave sailors.