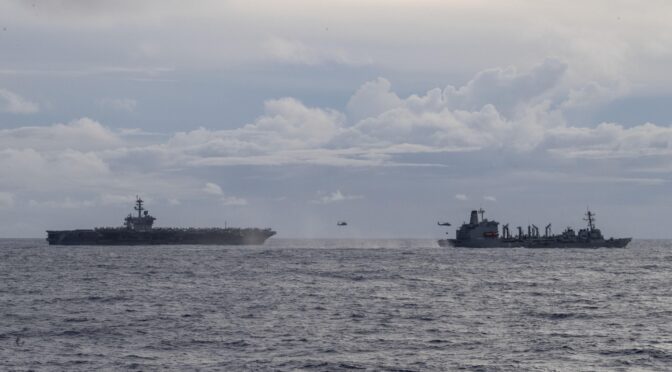 Based on data from the recent Maritime Workforce Working Group Report, there is an estimated 2,000 U.S. mariner shortfall for sustaining sealift in support of a major national mobilization lasting more than 6 months. This number could be even higher due to double counting mariners that are actively sailing and also serving as strategic sealift officers.

In a scenario that requires activating 61 organic sealift vessels for surge operations that continue into subsequent sustainment missions, there would be a mariner pool shortfall. There are not enough senior officers with the experience and qualifications to keep up the fight.

But there is another side of the coin, a conflicting truth. From the perspective of the individual U.S. mariner seeking a reliable career path, there is no real shortfall. Within the economically-driven mariner job market, there is actually a glut of mariners in the current workforce, especially in the officer ranks. Without recognizing this current condition, attempts to increase pool size could initiate a vicious circle of issues that will actually drive people from the Merchant Marine, thereby exacerbating the problem.

The trend towards increasing barriers to mariner retention has not changed in 20 years. These include; declining wages and benefits, reduced quality of shipboard life and time in port, increased administrative workloads and regulatory paperwork, the 2009 collapse of the American Maritime Officer (AMO) union pension plan, and a lack of progressive career opportunities. With diminishing incentives, sea-going careers are seen as a dead-end.

As a result, either no one wants to go to sea, or those who want to, cannot….

From a peacetime supply and demand perspective, there is ample reason for shipping companies to “close the books” now, postponing new hires until the job market improves. From the maritime labor union perspective, expanding recruitment means greater revenue from dues, and increasing U.S. government (USG) satisfaction. The USG is the primary customer of the Merchant Marine, and a larger pool of mariners is a good way to make this customer happy.

Unions typically give applicant members (new hires) better jobs to get them “on the hook”, and to get the associated dues rolling in. To appreciate the union perspective, consider the effects of the financial crisis of 2008. One of the largest officer unions, the AMO union provides an illustrative case study.

In 2008 the AMO pension plan became underfunded due to investment devaluation associated with the national financial crisis. In response, the government directed that the AMO pension plan be “frozen” in its underfunded state, with a newly defined contribution plan initiated for its members to use henceforth. To reduce liabilities, officers with 20 years or more of service, the original retirement eligibility requirement, were given a lump sum pay out from the old plan. The old plan was frozen for all other members with less than 20 qualifying years. This is not an uncommon practice in many industries, however, in this case, buy-out qualifying members who took the lump sum were allowed to also continue in their old jobs as a “buy-in.” Typically these jobs were in the higher paying management level positions.

As a result, mid-level employees (10-19 years of service) ended up with a defined contribution plan that looked no different than plans for those who started work in 2009. The frozen pension fund sits at zero percent interest to this day. AMO members who had less than 20 years are now looking at less than $1000 monthly pension payments after 20 years of service. This block of mid-senior level officers are excluded from the higher paying jobs.

This creates a situation in which middle aged and more experienced mariners are effectively pushed out, leaving the mariner pool imbalanced, with a majority of the members being either very senior or very junior.

The Military to Mariner program, recently empowered by executive order from President Trump, is intended to make it easier for military personnel to become merchant mariners. New U.S. Navy policy now directs that training and certification for Surface Warfare Officers is inline with International Maritime Organization standards. This training includes proficiency log books, enhanced radar classes, and bridge resource management that essentially meet IMO standards while preserving the Navy’s autonomy. This will accelerate this Military to Mariner transition, and create more supply without demand. Increasing the size of the labor pool without increasing the number of available jobs will only drive down wages.

U.S. mariner wages have been relatively stagnant for well over a decade, with increases below cost of living adjustments. Simultaneously, compensation for shore-side positions have risen to either match or surpass the entry level officer positions (third mate or third engineer).

A merchant mariner’s career path can best be described as a game of chutes and ladders….

Within the maritime industry, the laws of supply and demand are supreme. Mariners are paid at a contracted rate without regard for the individual’s years of service. Credentialed officers sometimes elect to sail below their rated credentials, and recent maritime graduates often take unlicensed billets, such as ABs (able seamen) and QMEDs (qualified members of the engineering department). In this environment, the U.S. mariner job market is dynamic and cyclical.

Shipping industry contracts and ships come and go in a turbulent nature. Inevitably, at some point in a mariner’s career, they will experience an unplanned lay-off, but there are few safety nets in place. When seeking new employment after a layoff, company loyalty will suddenly mean little. The mariner can be caught between opposing actions taken by the unions and operating companies. To the mariner, this can feel like a shell game, with the price of admission being high dues and initiation fees. A lack of progressive wage growth and upward promotion opportunity is a major disincentive to the brightest and most qualified who might choose a sea-going career.

Other Barriers to Retention

By far, most mariner jobs are obtained through labor union representation. Many critics assume an anti-union bias, blaming “greedy” unions for driving up U.S. mariner labor costs in the competitive global market. The reality is that U.S. maritime unions have been forced to compete for a limited number of contracts, resulting in a “race to the bottom” at the expense of the mariner.

Within the competitive global market, U.S. mariner contracts have slowly been stripped of benefits. This includes cost of living adjustments, travel pay, compensation for additional regulatory-required training, overtime benefits, seniority rights for job selection, and reduced base wages and days for calculating vacation benefits. In addition, the unions have lost influence over companies for quality of life standards, such as the quality of food, internet and satellite phone access, and other morale and welfare benefits.

No longer glamorous, a life at sea has devolved into a form of self-imposed incarceration…

Due to increased workload and crew reductions, there are no longer opportunities to go ashore during port visits. At-sea rotation periods have increased, despite several studies indicating that continuously working at sea past the 90-day mark means declined performance. Operating companies push for extended rotations to save on mariner travel and repatriation costs. These are conditions that lead to mariner fatigue and burn-out, driving departure from the industry.

Looking at the MSC deployment model of four months on and one month off, it is no mystery that upon achieving a senior USCG license level recognized as management worthy, many MSC civilian mariners transition to shore-side employment. Labor unions no longer support rotary shipping, and have moved to a model employing permanent employees requested by the operating companies. Ship officer billets are now filled by only an A and B team rotation. When issues arise, instead of adding a third person, the demand is placed upon the mariner to either stay longer, or come back early. While A-B permanent rotations are desirable to some, bringing back rotary shipping and short-fill jobs would serve both mariners needing work and those who need a respite. The greater mariner pool would remain more proficient and ready to serve in a crisis shipping scenario.

For many young women who want a family and a sea-going career, the Navy, not the Merchant Marine, has become the family-friendly option.

A career at sea offers little balance between career and personal life. The youngest mariners often work within a five-year plan. As incentive to upgrade, current licensing procedures favor junior officer advancement to the mid-level. After the first year of sea time is documented, third mates automatically receive an upgrade to a second mate license. Currently, Chief Mates require only six months sea time to obtain an Unlimited Master license. This may address a mariner pool shortfall, but will it be a pool of proficient mariners?

Acknowledging the reduced size of the U.S. Flag merchant marine, the Marine Administration (MARAD) Ready Reserve Force (RRF) program provides an alternate avenue for employment. These mariners spend extended periods of time in reduced operating status (ROS), and many have not been to sea in years. Engineers who have “upgraded at the dock” from third engineer to chief engineer may be very knowledgeable of the ship, but their readiness for long sea periods is not verified. While most RRF ROS crewmembers would like to rotate through sea-going relief jobs — MARAD promotes this idea — RRF ship managers and unions do not necessarily support rotations because of the administrative and contract performance work associated.

A topical discussion on mariner proficiency might consider the lessons learned from the 2017 collisions involving the U.S. Navy destroyer USS Fitzgerald and the USS John S McCain. Prior to these collisions, in May of 2014, Admiral Thomas Copeman stated “If we continue to invest in the latest and greatest equipment and the most capable weapon systems without making an equivalent investment in our workforce, we will move further away from being a ready force.” The Comprehensive Review of Recent Surface Force Incidents noted that:

Is the operational plan for surge sealift headed down the same collision course as the Navy Surface Fleet experienced in 2017?

The United States will continue to have a mariner shortage for surge sealift without increasing the number of career-viable sailing jobs, combined with adequate compensation and training allowances, and quality of life at sea equivalent to competing shore-side employment opportunities. The current model of increasing the labor pool will only push out mid-level mariners. Incentives are needed for mariner retention. It is not just about quantity, but also quality. Solutions include expanding MSP programs, strengthening Jones Act trade, and tapping into emerging markets, such as petroleum and liquid natural gas exports. Strengthening sealift is not just about ships, it is about people!

LCDR Grundy  graduated from SUNY Maritime College in Bronx, NY in 1994 and was commissioned into the Strategic Sealift Ready Reserve Group (SSOF) as a Direct Commission Officer in 2011. She is licensed by the USCG as an Unlimited Master and has served on a variety of merchant vessels including: container, RO/RO, crane/ heavy lift vessels, oceanographic survey and surveillance, cable lay, freight bulkers and chemical tankers. She worked with the American Maritime Officers Union (AMO) from 1994 to 1997 and worked in environmental and occupational health. She continues to sail with AMO in a rotary capacity.

As a Naval Officer, she is part of the Strategic Sealift Officer Force. Her tours include Military Sealift Command, Pacific, the U.S. Merchant Marine Academy, NCAGS Naval Cooperation and Guidance for Shipping, TRANSCOM and has conducted several afloat BRM workshops for COMNAVSURFPAC. She currently serves as a Senior Mentor within the SSO Mentorship Organization.

4 thoughts on “The Glutted Mariner Shortfall ”