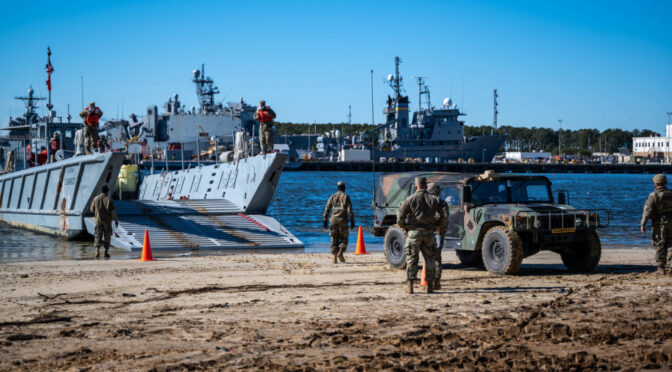 Future conflicts will become more complex as the United States deals with near-peer competitors. The new U.S. Army Operating Concept, The U.S. Army in Multi-Domain Operations 2028, states that the Army will need to gain and maintain the initiative while maintaining global agility. Sea basing is the rapid deployment, assembly, command, projection, reconstitution, and re-employment of joint combat power from the sea.1 Operational sea basing provides the Joint Force Commander with flexible options to project and sustain combat power ashore.

The Army faces challenges with sea basing due to its focus on land warfare. However, the Army has a long history of maritime operations, a critical element of projecting combat power around the globe. Strategic power projection relies heavily on Army Prepositioned Stocks (APS), Army equipment and material situated around the world on land and sea, that provide the ability to deploy combat power on numerous continents.

Limitations to the APS model exist. Equipment is loaded to maximize space and lower cost versus loaded in a combat configuration. Vessels require adequate and secure seaports to be able to download equipment and receive and stage material for further movement in theater. The current configuration of the APS is not suitable to accommodate sea basing operations.2 Shrinking the gap between early entry forces and the buildup of more robust forces will require the Army to develop innovative approaches to surface and vertical sea basing connectors. Doing so will allow US forces to seize, maintain, and exploit the initiative.

During the 1982 Falklands War, the British relied on sea basing to effectively sustain their combat operations. Operating 8,000 miles from the United Kingdom, the British had to figure out how to support a task force that included warships, aircraft, and Royal Marines. In order to sustain combat operations at sea, the British activated approximately fifty merchant ships for military service.

These vessels included container and roll-on/roll-off (RO/RO) ships and fuel tankers, which made up one third of the activated vessels. The British also developed an Intermediate Staging Base (ISB) on Ascension Island, approximately halfway between the Falklands and Great Britain. Over the course of the 60-day conflict, the British moved 5,800 personnel and over 6,600 tons of supplies through the ISB, highlighting the amount of logistics support necessary for a relatively small conflict.3

Sea basing proved to be absolutely critical for the British to sustain Operation Corporate, the codename for the UK’s Falklands campaign. Without sufficient merchant supply ships and a ideally-located strategic ISB, the British would have struggled to support their joint operations.

Similarly, in the future the United States may find itself protecting vital territories or interests far from the continental mainland. Depending on the location, the US may not have the luxury of having access to forward seaports, airfields, and land bases to build combat power. In that case, sea basing would be a crucial requirement for projecting combat power into a theater of operations and sustaining it for an undetermined amount of time.

Sea basing allows the Combatant Commander to use the sea as additional maneuver space and place vulnerable lines of communication outside of enemy action or influence. Visualizing the sea basing concept in terms of time, space, and resources highlights its true potential along five lines of operation: Close, Assemble, Employ, Sustain, and Reconstitute (CAESR).4

Close: The Army must rapidly and decisively close in on an area of operations to maintain a competitive advantage across the spectrum of possible operations. Whether responding to hostilities or a humanitarian assistance mission, the Army should maintain a posture that allows resources to arrive quickly in the right place at the right time. Embracing sea basing will allow Army transportation assets to close decisively in theater.

Assemble: Assembly means the ability to put forces together in a way to achieve a common mission. Before the force itself can be assembled properly, the elements of the sea base need to know where and how to fit together in a logical way. Doing so will enable the smooth flow of resources and personnel from the assembly area into and out of the operational area. Army transportation assets should be built or modified with this concept in mind. The development of the Maneuver Support Vessel (MSV) family of Army watercraft must be able to connect with US Navy expeditionary support vessels and prepositioned stock afloat assets.

Employ: Once the Army arrives in a theater of operations it must be able to command and control land forces in support of the Combatant Commander’s objectives. Throughout history, the U.S. Army has deployed forces in conditions ranging from uncontested landings to under direct enemy fire. During the buildup of forces in Saudi Arabia during Operation Desert Shield, U.S. forces arrived in a secure partner nation port with modern facilities to offload equipment. While this scenario may be possible again in the future, the Joint Force has to plan for the employment of forces in an austere environment under hostile fire.

The Army is no stranger to employing forces from the sea, as evidenced on the beaches of Normandy and Inchon. These amphibious landing operations under intense enemy activity highlight the importance of integrated and rehearsed land and sea operations. Ensuring that the United States military has the capability to conduct such operations in the future, especially in the INDOPACOM theater, is essential. Critical maritime enablers, combined with the ability to operate and replenish a sea base, will enable the effective employment of land forces.

Sustain: One of the most important aspects of military operations is the ability to sustain the force. Global sustainment of forces is the main reason that the United States can fight wars away from the homeland. As Great Britain realized in 1982, conflict may not always occur under ideal circumstances or in proximity to established supply bases. The Army needs to be able to resupply and refit forces in any operational environment efficiently and effectively. This ability largely relies on airlift and sealift capabilities to distribute supplies from the strategic enterprise down to the operational and tactical level. Joint sea base platforms will require the ability to operate at sea while sustaining forces further inland.

Reconstitute: At the conclusion of operations or for survivability, the sea base may have to disperse and refit for future operations. Joint Forces must have afloat enablers and watercraft postured for the rapid assembly and disassembly of a sea base to ensure critical assets remain protected and available for subsequent operations.

The Army’s Role in Sea Basing

The Army developed and established units to conduct amphibious combat and sustainment operations in a variety of theaters. This allows the Army to utilize sea basing with the equipment currently in its stock. The Army’s primary watercraft are the Landing Support Vessel (LSV), the Landing Craft Utility 2000 (LCU), and the Landing Craft Mechanized 8 (LCM). These vessels ferry equipment and supplies from the Roll On/Roll off Discharge Facility (RRDF) to either an established pier or the Trident Pier, a multi-pronged floating dock with the ability to offload cargo from ships of various sizes and discharge onto the shore.

The Army also owns the modular causeway system—a floating set of piers that can be configured for loading and unloading Army watercraft. The RRDF and the Trident Pier are designed to offload equipment and supplies from Military Sealift Command and Army watercraft vessels. The RRDF is used as a floating pier in open water for offloading equipment from RO/RO ships to smaller watercraft such as the LSV, LCU and LCMs. These systems and capabilities are integral pieces of the sea basing concept, enabling the Army to remain relevant in joint operations in a littoral environment. to perform the employment and sustaining lines of operations of sea basing.

The downside to the current Army equipment is the inability of Army vessels to interface directly with Military Sealift Command (MSC) vessels, therefore requiring access to the RRDF to offload equipment. To fix this issue the Army is currently developing the MSV family of watercraft, which will allow the loading and offloading of equipment directly from MSC vessels without the need for additional equipment. These ships will eventually replace the current Army fleet and will enable quicker movement from a sea base in the beginning of an operation.

Another issue is that current amphibious landing equipment is largely under the control of the Army Reserves. Reserve Component forces do not respond and mobilize as quickly as Active Component forces can. This may put a joint operation at a disadvantage in the beginning as Reserve forces mobilize, train, deploy, and arrive in theater. This is precious time lost in a humanitarian response or direct action mission set. Some mitigation measures can allow the Reserve Component to get into position faster.

Prepositioned stocks of Army watercraft and floating causeways are located in Kuwait and Japan. Causeway material in these locations is stored on land and takes time to organize and employ. Positioning a floating causeway company’s worth of systems onto APS afloat vessels would improve the speed of deployment. In conjunction with moving causeway systems onto strategic sealift craft, Reserve operators can regularly train to employ this equipment across the world. This will ultimately improve response time and make a sea base viable with equipment already afloat.

Sea basing enables the U.S. Army to execute and sustain joint combat operations in unestablished theaters around the globe quickly. Platforms that can operate across multiple domains need to be a focus for the Joint Force in developing capabilities to ensure sea basing can be executed. Developing and refining doctrine and conducting training starting with the current force structure will make sea basing an executable capability in the long term. The Army must look at the APS stocks and reconfigure them to contain more JLOTS equipment to expedite the ability to execute this concept. In the near future, the Army is going to have to move across the sea, configured in a scalable task force, and possibly without much notice. Exploring, funding, and fielding assets capable of sea basing will ensure that the Army can go where it’s needed, when it’s needed, ready to fight.

Major Timothy Fitzgerald is currently stationed at Fort Drum, NY, as the 277th Brigade Support Battalion Executive Officer. He was previously the Brigade Logistics Officer for the 210th Field Artillery Brigade in the Republic of Korea.

Major Timothy Owens is currently a U.S. Army Interagency Fellow at the United States Department of Agriculture (USDA). He previously served as the Division Transportation Officer (DTO) of the 10th Mountain Division at Fort Drum, NY.

One thought on “The Future of Sea Basing for U.S. Army Transportation”