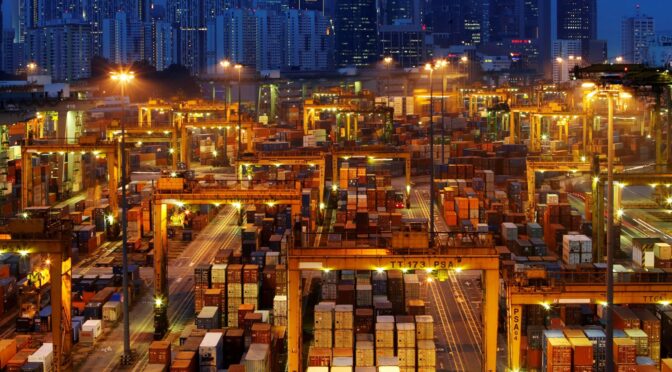 By Christian Morris and Heather Bacon-Shone

Insulated by oceans to the east and west, and friendly neighbors to the north and south, America will always have to concern itself with sealift when fighting. It is well-acknowledged that while for some eight decades the U.S. has been able to move military materiel largely without contest from one theater to another. But this will likely not be the case in some future fight. This concern has dredged up, in memory and in practice, tactics employed decades ago to defend against contested oceans.1 To pace threats and ensure sealift survivability, America could relatively safely “smuggle” a certain amount of clandestinely loaded military materiel across contested oceans and through contested chokepoints, until reaching friendly offload destinations in theater.

Devising A New Approach to Sealift

In a 21st-century world of over-the-horizon ballistic missiles, cloud-penetrating synthetic aperture radar, and global satellite imagery, where remarkable resolution and coverage are available even from open sources, we can no longer rely upon 20th-century tactics to “hide” sealift, whether solo or convoyed, in transit. While certain elements of emissions control (EMCON) and operational discipline can complicate adversary firing solutions and enhance escorts’ ability to shield high-value assets from attack,2 we must assume the adversary will be attentively watching every step of loadout, transit, and offload and in near-real time.

America’s hope is that its large network of allies and coalition partners worldwide, a small handful of Afloat Prepositioning ships, and a scattering of vestigial bases largely left over from previous generations’ conflicts, will provide sufficient maritime resupply and security in case of conflicts across contested waters. Though such friendly ports may wait with welcome roads, railways, and runways at the end of an arduous maritime journey, sealift ships still have to get there safely. For those early stages of overseas conflict, before America has gained control over her sea lines of communication (SLOCs), she still lacks a 21st-century secure sealift solution.

If the Chinese Communist approach to contested oceans is state ownership and control of resources, it seems the capitalist, democratic approach would be to embrace the natural camouflage of a heterogeneous, profit-driven, highly international containerized shipping industry. For example, a vessel’s owners may be Greek, the company Danish, the insurers British, the officers Eastern European, the unlicensed mariners Filipino, the embarked security American, the cargo from a half- dozen countries in Southeast Asia and Africa, and bound for customers throughout the Americas. And that is just one ship among thousands. For locating military sealift cargo that was clandestinely loaded, it would be fiendishly difficult to find one particular ship in the company of hundreds of lookalikes.

While sealift is often thought of in the context of sustainment, it is often also the precursor to initial intentional action. While existing national sealift assets – the Ready Reserve Fleet (RRF), Military Sealift Command (MSC) ships, and Maritime Security Program stipend ships – all play a valuable role once combat is engaged and SLOCs secured, the U.S. still lacks a good way to move assets into theater securely and discreetly at the start of hostilities or before opening a new front in the conflict. Secretly loading containerized military equipment among the millions of TEUs processed annually at key U.S. ports such as Los Angeles/Long Beach, New York/New Jersey, Houston/Galveston, and Savannah could help military sealift hide in plain sight.

The aging RRF ships, which struggle to maintain readiness despite heroic efforts from crews, could still be employed as decoys. These ships could make a big show of loading dummy vehicles, empty fuel bladders, and aircraft aboard them and sending them out in convoys, communicating in codes that are known to be compromised. Meanwhile, the actual critical materiel can move invisibly aboard MSP ships (provided their “cover” of commercial shipping remains unbroken) and in contracted spaces on other containerized vessels flagged under friendly nations.

To shepherd the cargo’s movement into theater, a plainclothes Navy Tactical Advisor (TACAD) could be hired, on articles, as an unassuming member of the ship’s company – since all TACADs, commissioned as Strategic Sealift Officers in the Navy Reserves, carry unlimited-tonnage deck or engine licenses. (TACADs, who currently conduct secure Navy communications and train for convoy operations aboard civilian vessels carrying military cargo, are well-suited for such duties.) Alternatively, with sufficient time to prepare, TACADs could be embedded unobtrusively as employees throughout international shipping fleets, similar to their natural civilian-job distribution in U.S. commercial shipping; and TRANSCOM could prioritize ships with TACADs in the crew for surreptitious military cargo movement.

To avoid concerns about their combatant status under the Geneva Conventions and Law of Armed Conflict, such “undercover” TACADs could be required to travel with a uniform and ID card to show in case of enemy capture – a tactic similar to that used by the Merchant Marine during the Vietnam War.

Additionally, TACADs could be required to surrender their civilian salaries to the government while on simultaneous orders, avoiding conflicts of interest while keeping the arrangement opaque to the ship’s crew. Finally, the U.S. government would need to be prepared to reimburse vessel owners for any loss or damage during transit; since the charter party contract, to maintain proper “cover,” likely would not specify the carriage of military cargo or employment of personnel under military orders.

It would be both unnecessary and unwise for such undercover TACADs to communicate updates on their secret cargo regularly, even by secure means. With the location and identity of those vessels easy to track via satellite imagery and cloud-piercing synthetic aperture radar, and with the elementary algebra of cryptanalysis resting on using knowns (vessel name and location) to guess unknowns (the method of encrypting that information), those codes, and all they protect, would be unnecessarily exposed. Nor should these vessels attempt to mask their location or identity; in a commercial shipping world where deck officers largely “drive by AIS,” being a dark target draws unnecessary navigational danger and sound Bridge Resource Management principles require deck officers to maintain a proper lookout by all available means, commercial shipping’s dependence on AIS as a near-sole means of collision avoidance creates significant risk of collision for even the most attentive mate aboard a non-transmitting vessel in a busy shipping channel. Modern deck officers often assume non-AIS radar blips are tiny pleasure craft or fishing vessels; unused to looking out the window to visually confirm, and assuming they are passing something small, they can create dangerously close CPAs – particularly hazardous in congested shipping lanes. Indeed, the lack of Navy ships’ AIS signals contributed to the 2017 collisions, spurring the Navy’s policy change to allow AIS transmission in crowded shipping lanes.

At the same time, coastal nations tracking marine traffic assume non-AIS targets are either warships or bad actors engaged in illegal activity – either way, drawing outsized attention, and potentially even aggressive engagement. “Going dark” might as well be wearing a giant “Look Here!” signboard in today’s operational intelligence world. It would be better to keep the civilian crew unaware of their clandestine military cargo, so the ship, operating normally, unwittingly, and safely blends into ordinary commercial traffic.

These clandestine solutions offer more flexibility for sealift and could help mitigate capacity shortfalls. They could also stretch adversary intelligence capabilities and dilute assets allocated toward finding and targeting sealift.

If, as Sun Tzu said, “All war is deception,” we should seek more ways for our 21st-century sealift to hide in plain sight.

Lt. j.g. Christian Morris, a graduate of Great Lakes Maritime Academy, sails commercially on the Great Lakes. He is a warfare-qualified Navy Reserve Strategic Sealift Officer who has twice served as a TACAD aboard commercial ships, in addition to assignments aboard Ready Reserve Fleet and Military Sealift Command ships. He holds an unlimited-horsepower 2nd Engineer’s license for steam and diesel.

Ens. Heather Bacon-Shone is a prior-service Coast Guard officer who sails as a civilian mariner with Military Sealift Command. A warfare-qualified Navy Reserve Strategic Sealift Officer, she has deployed twice as a TACAD and assisted the SSO Force with strategic planning and public affairs. A former member of the Chief of Naval Operations’ Rapid Innovation Cell (CRIC), she holds an unlimited-tonnage Chief Mate’s license and is a Coast Guard Permanent Cutterman.

The opinions in this article are made in the authors’ personal capacity and do not necessarily represent the views of the U.S. Navy, the Department of Defense, or the authors’ civilian employers.

1. “The positive necessity for radio silence on the part of vessels engaged in naval operations during war cannot be emphasized too strongly.” J.M. Lewis, A digest of naval communications, US Naval Institute, 1928. In addition to emissions control, Lewis also champions the use of tactical signals passed through visual communications, including semaphore and flashing light. The use of emissions control to evade radio direction-finding dates to WWI; so does zig-zagging to avoid torpedoes. See Remarks on submarine tactics against convoys, Office of Naval Intelligence, 1917. Within a year, the Navy questioned the value of the zig-zag: Analysis of the Advantage of Speed and Changes of Course in Avoiding Attack By Submarine, Office of Naval Intelligence, 1918.

2. That is, if escort combatants are even available. See https://www.defensenews.com/naval/2018/10/10/youre-on-your-own-us-sealift-cant-count-on-us-navy-escorts-in-the-next-big-war-forcing-changes/.

Featured Image: The Port of Singapore. (Photo via Reuters)