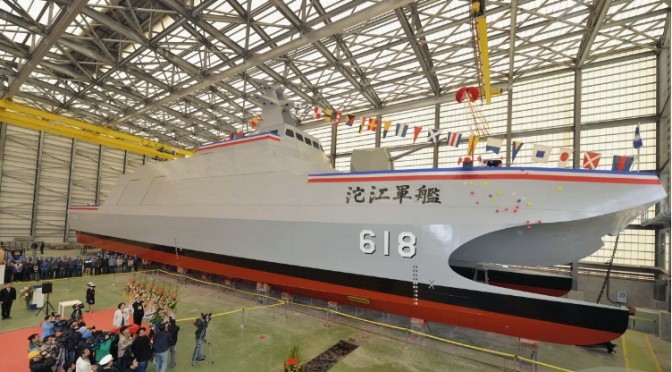 It’s always nice to see what others are doing.

We have talked about a cutter X before, that is, a cutter larger than the U.S. Webber class, but smaller than the Offshore Patrol Cutter, that would allow more days cruising at a distance from their home ports than is possible for the Webber class.

Focus Taiwan is reporting (it is their video above) that Taiwan is building ships in this class but in a very different form, for a very different purpose. It measures 60.4 meters in length and 14 meters in width, with a crew of 41. It is fast at 38 knots and has a range of 2,000 nautical miles (this is actually less than the range of the Webber class, but if this is quoted for a higher cruise speed, the range could actually be greater than that of the Webber class at the same lower speed). The great beam is the giveaway, the hull is something unusual.

We have seen a similar hull form before.