For the Athenians, the Great Harbor of Syracuse was anything but.  A monument to the Athenian tactic of bottle-necking of the “world’s” most powerful navy, the battle at the Great Harbor symbolizes the cost of trading mobility for convenience.  Today, the five carriers lined up in Norfolk like dominoes are reminiscent of that inflexibility, serving as a greater metaphor for constraints the fiscal crisis may impose on the U.S. Navy worldwide.

During the siege of Syracuse, the Athenian expedition anchored its naval task force inside the protected Great Harbor of Syracuse.  Maintaining such a large force in a single place and at anchor decreased the costs of manning and command and control (C2).  The single entrance of the harbor and its copious defenses against wind and wave also simplified the fleet’s maintenance and logistics.  The convenience came at heavy cost.  The fleet’s great numerical advantage was lessened by lack of mobility.  Infrequent patrols allowed the Athenians to deploy navigational hazards and blockade runners.  Syracuse’s superficially low-cost, reactive approach lost to the proactivity of the enemy.  The harbor’s single entrance turned into a nightmare scenario as the massive fleet was locked into the harbor by a chain of ships strung across the entrance.  The fleet of the mightiest naval power in the world died in a Sicilian quarry without a single ship remaining.

America’s Great Harbor is not in a foreign land, but up Thimble Shoals Channel and through the gap in the Hampton Roads beltway.  Five carriers, the world’s most powerful collection of conventional naval power in one location, sit idle at harbor, one beside the other.  The United States maintains a massive naval center of gravity, within a single chokepoint that could be plugged at a moment’s notice in prelude to further enemy action.  The concentration not only lends itself to easy containment, but simplifies the potential for espionage and terrorism.  The fiscal noose tightening around the Navy’s neck is creating a prime target that goes against every lesson we’ve learned from Pearl Harbor to Yemen.

America’s Great Harbor is a vicarious manifestation of a more terrifying fleet-wide atrophy.  Sequestration will force the navy into a fiscal Great Harbor.  A 55% decrease in Middle Eastern operational flights, a 100% cut in South American deployments, a 100% cut in non-BMD Mediterranean deployments, cutting all exercises, cutting all non-deployed operations unassociated with pre-deployment workups, as well as a slew of major cuts to training – these further compound the losses from the Navy’s previous evisceration of the training regime.  Despite a growing trend of worries about fleet maintenance, a half year of aircraft maintenance and 23 ship availabilities will be cancelled.  The snowballing impact on already suffering training and maintenance will further exacerbate that diminishing return on size and quality created by the fiscal Great Harbor.  Nations like China and Iran continue to make great strides in countering a force that will recede in reach, proficiency, and awareness.  The mighty U.S. Navy is forced to sit at anchor while the forces arrayed against her build a wall across the harbor mouth.

Military leadership has done a poor to terrible job advocating the true cost of defense cuts.  A series of actions by the brass has undermined their credibility and covered up the problem.  The blinders-on advocation for teetering problems like LCS and the F-35 have undermined the trust that military leadership either needs or can handle money for project development.  The Navy personnel cuts were pushed for hard by leadership, and when the Navy grossly overshot its target, the alarms were much quieter than the advocation; the ensuing problems were left unadvertised.  In general, military-wide leadership uses public affairs not to inform, but as a method to keep too positive a spin in a misguided attempt to keep the public faith.   That public faith has removed vital necessary support in a time when the military is rife with problems that absolutely require funding.  The PAO white-wash helps under-achieving programs and leadership get passed over by the critical eye.  Where Athenian leaders were frank with their supporters at home, stubbornness and inappropriate positivity have undercut military leadership’s ability break loose from the fiscal harbor.

Those who dismiss the hazard of sequestration are wrong in the extreme.  When I was an NROTC midshipman, I remember a map on the wall of the supply building: a 1988 chart of all US Navy bases around the world.  Today’s relative paucity of reach leads some to believe that surviving one scaling back shows inoculation against another.  However, the law of diminishing returns has a dangerous inverse.  Each progressive cut becomes ever more damaging.  The U.S. Navy and sequestration apologists must realize what dangerous waters the Navy is being forced to anchor in.  The question is, how long can the navy safely stay in the Great Harbor before her enemies get the best of her?

Matt Hipple is a surface warfare officer in the U.S. Navy.  The opinions and views expressed in this post are his alone and are presented in his personal capacity.  They do not necessarily represent the views of U.S. Department of Defense or the U.S. Navy, although he wishes they did. 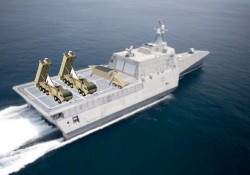 HNLMS Evertsen is one of four De Zeven Provinciën class air defence and command frigates in service with the Royal Netherlands Navy (Koninklijke Marine). Evertsen is the youngest of the four, having been completed in 2003 and commissioned in 2005. These ships superseded the two smaller Tromp class frigates, decommissioned in 1999 and 2001. Despite being classified by the Netherlands Navy as frigates, their displacement (6,050 tonnes), complement (202 + 30 aircrew), and role make them comparable to many destroyers. They are similar in these respects to the RAN’s planned Hobart-class Air Warfare Destroyers (AWD).  The Netherlands Navy also intends to use the De Zeven Provinciën class in a limited Ballistic Missile Defence (BMD) role, having recently awarded a contract for modification of the ships’ Thales SMART-L and APAR radars. According to an article in January’s Proceedings magazine, these modifications are expected to be complete by late 2017. It should be noted that the currently planned modifications only endow the class with the capability to detect and track ballistic missile threats, and do not provide for surface-to-air interceptor missiles.

HNLMS Evertsen participated in EUNAVFOR’s Operation ATALANTA in 2009; in one operation her crew were responsible for capturing thirteen Somali pirates who had previously attempted to board the BBC Togo off the coast of Oman. In 2010, HNLMSTromp took part in Operation ATALANTA, including the retaking of the German flagged MV Taipan by Dutch marines. Evertsen has returned to the Horn of Africa as the Netherlands’ contribution to NATO’s Operation Ocean Shield, under the command of Commander Boudewijn Boots, and serves as the flagship of Ocean Shield for Commodore Ben Bekkering, current Commander SNMG1 (Standing NATO Maritime Group 1), and his international staff of 24. She has been involved in several successful counter-piracy actions, including detaining Somali pirates who had hijacked an Omani dhow and its crew, and used the vessel to attempt to board the MV Namrun. The Evertsen carries a Royal Netherlands Marine Corps Enhanced Boarding Element (EBE) as part of its counter-piracy capability. The EBE is made up of operators from the Royal Netherlands Marine Corps Maritime Special Operations Forces (MARSOF), assigned to the vessel for counter-piracy duties. It may also be supplemented by regular marines.

The Formidable class are also highly automated, operated by a complement of only 71 crew (90 including air detachment). By way of comparison, a US Oliver Hazard Perry class has a nominal compliment of 176, an Australian Anzac class a complement of 163, and a French La Fayette class a complement of 141. The Formidable class are designed to operate as the naval centrepiece of the Singapore Armed Forces’ (SAF) Integrated Knowledge-based Command and Control (IKC2) network. Integrating the advanced sensor packages and armaments of the ships to give commanders the ability to rapidly assess the battlespace and respond accordingly was a key design focus for the project. Dr Kenneth Kwok, Programme Director for Information Exploitation at the DSO national Laboratories noted: “The frigate has many state of the art weapon systems and sensor systems, but it is really how you put them together and integrate them into a fighting system that makes the difference”.

Six Formidable class frigates were built, with all but RSS Formidable being built by Singapore Technologies Marine (ST Marine) at their Benoi Shipyard, in Singapore. Construction of the class ran from late 2002 until mid-2006, with all ships being commissioned by January 2009. All are currently active, and form the 185 Squadron of the Republic of Singapore Navy (RSN). The RSS Formidable was Singapore’s contribution to the forces conducting RIMPAC 2012, operating in conjunction with participants from twenty-one other nations. Singapore’s incumbent Minister for Defence, Dr Ng Eng Hen, has confirmed that a Formidable class frigate (and the attached S-70B) will soon deploy to the Gulf of Aden as part of Singapore’s contribution to CTF-151.

This piece originally appeared as two separate posts at our Aussie partners’ Security Scholar blog, check it out for more photos on the above ship classes.