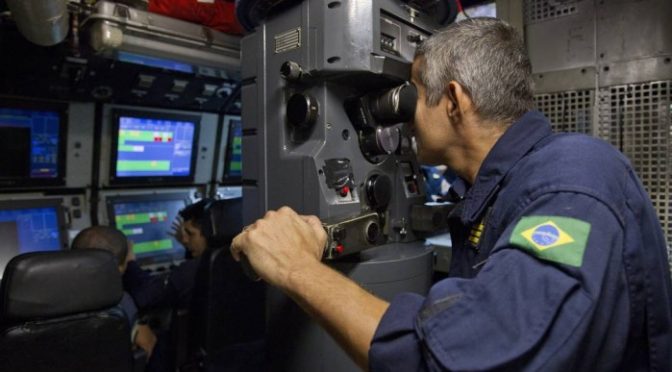 In spite of Brazil’s political crisis, the Brazilian Navy has continued with its ambitious project of domestically constructing a new fleet of submarines, including a nuclear-powered platform. The first Scorpène-class submarine is expected to be launched in 2018, an important development though a couple of years behind schedule. However, the question remains: does Brazil require today, or will it require in the foreseeable future, an advanced submarine fleet?

A 2009 contract between the Brazilian Navy and French conglomerate DCNS “covers the design, production, and technology transfer required for four Scorpène-class conventional submarines, and the design assistance and production of the non-nuclear part of the first Brazilian nuclear powered submarine, including support for construction of a naval base and a naval construction site.” This contract was the result of a defense agreement signed in 2008 by then-Brazilian President Luiz Inacio Lula da Silva and his French counterpart, then-President Nikolas Sarkozy. This project is known as the Submarine Development Program (Programa de Desarrollo de Submarinos; PROSUB).

It is worth stressing that the Brazilian Navy is particularly interested in learning how to manufacture the submarines domestically, rather than relying on DCNS to construct and assemble the submarines abroad. For example, in July, the Brazilian company Nuclebras Heavy Equipment (Nuclebrás Equipamentos Pesados; NUCLEP) delivered the stern section of Humaitá to Itaguaí Construções Navais (ICN) which is assembling the platform in Rio de Janeiro. According to IHS Jane’s Defense Weekly, “the submarine’s hull has been divided into five sections and to date … four sections of SBR 2 [have been delivered]. The final one is scheduled to be delivered in November.”

As for the nuclear submarine SN-BR Alvaro Alberto (SN-10), the Brazilian Navy’s PROSUB webpage reports that it is still in the developmental phase and that actual construction will commence in 2017 and be completed by 2025. “The transfer [of the submarine] to the Navy is expected to take in 2027,” the Navy explains.

A word should be said about the status of the shipyard, also part of PROSUB, since the Navy wants the capacity to construct more of these platforms in the future. To this end, a 750,000 square meter complex is under construction in the municipality of Itaguaí (Rio de Janeiro). In 2013, the Metal Structures Manufacturing Unit (Unidade de Fabricação de Estruturas Metálicas; UFEM) was inaugurated, with then-President Dilma Rousseff in attendance. Among other tasks, UFEM will manufacture the metal hull structures of the platforms.

The DCNS and Other Issues

It is necessary to highlight that the construction of these platforms has not been a smooth ride. A 1 March 2013 article by Reuters reported that “the first conventional submarine [will be completed] in 2015 and the nuclear-powered submarine will be commissioned in 2023 and enter operation in 2025, the Brazilian Navy said in a statement.” The timetable was perhaps too ambitious as the first submarine Riachuelo is now scheduled to be launched in 2018, three years later than originally reported. Similarly, the nuclear platform is now expected to be ready by 2025, not 2023. Part of the reason for the delay has to do with the country’s recent economic crisis which has affected the budget of governmental agencies, including defense.

Due to space considerations, we cannot provide a full account of Brazil’s political crisis over the past year with regards to the Lava Jato revelations. Nevertheless, it is important to note that the Brazilian conglomerate Odebrecht, which is involved in PROSUB via its ICN unit, has been implicated in the scandal. (Ret.) Admiral Othon Luiz Pinheiro da Silva, considered the father of Brazil’s nuclear program and a major supporter of the nuclear submarine (see his biography in Togzhan Kassenova’s commentary Turbulent Times for Brazil’s Nuclear Projects) has also been implicated in illicit activities. He was sentenced to 43 years in prison this past August for corruption and money-laundering. While PROSUB itself has survived the recent crises, these scandals raise the question whether there will be new allegations of illegal activities surrounding the construction of these platforms in the near future.

The other problem with PROSUB is that sensitive information about the Scorpène-class subs may be out in the open as DCNS has suffered a massive intelligence leak. This past August, the Australian daily The Australian published documents which “detail the secret combat capability of six Scorpène-class submarines that French shipbuilder DCNS has designed for the Indian Navy.” According to reports, the DCNS leak includes more than 22,000 pages about the Indian platforms.

At this point it is worth remembering the words of Admiral Eduardo Leal Ferreira, commander of the Brazilian Navy, who spoke at a recent 26 September event entitled “Addressing Challenges in the Maritime Commons” at the National Bureau of Asian Research. An article written by the author for IHS Jane’s Defense, quotes Admiral Ferreira stating that the PROSUB program is the Navy’s main priority, followed by upgrading the fleet’s frigates, and then repairing the Sao Paulo(A-12) carrier. In other words, PROSUB, in spite of delays, budget issues and other incidents, will continue.

Given that PROSUB is well underway and by next decade we will see a modern, domestically constructed, Brazilian submarine flee. The question is: why does Brazil need these platforms?

The standard reason is for Brazil to monitor and protect its 7,500 kilometers of coastline and vast maritime territory, including its natural resources (the discovery of underwater oil reserves is an often-mentioned fact), from domestic and foreign threats. In his remarks for NBAR, Admiral Ferreira added that the Atlantic Ocean is an open ocean, not a closed sea, so Brazil requires a blue water navy, hence the importance of the submarine and aircraft carrier program. The admiral also highlighted the necessity to have freedom of navigation, implying a blue water navy is necessary, “so when there are problems in the South China Sea or the East China Sea or wherever, we won’t be affected.”

This author argues that Brazil does not have any major inter-state issues that would make the submarines, a platform suitable for conventional warfare, necessary. The reality of South American geopolitics is that Brazil’s relations with its 10 neighbors, including one-time competitor Argentina, remain quite cordial. Hence, the possibility that a regional state would attempt to aggressively take control of part of Brazil’s exclusive economy zone is too remote to realistically contemplate.

Additionally, while Brazil has pursued the submarine program (among other platform acquisition projects), this has not sparked a regional arms race for fear of an “imperialist” Brasilia trying to take over a neighbor’s territory. In other words, regional states do not appear threatened by Brazil’s PROSUB program, highlighting the current status of regional geopolitics and the general success of confidence building mechanisms (for example Brazil has a constant presence in regional military exercises, such as hosting UNITAS Brasil 2015 and serving as the deputy commander for PANAMAX 2016 – Multi-National Forces-South), which make the possibility of inter-state warfare remote in this region.

Likewise, there is little chance that an extra-regional power will deploy a fleet to Brazilian waters a la Spanish Armada to take over its oil platforms. While it is true that the U.S. did send a fleet, led by the USS Forrestal, to support Brazil’s military coup in 1964, bilateral, regional and global geopolitics are not the same as five decades ago.

Without a doubt, Brazil deserves a well-equipped and modern navy that can address its 21st century challenges, protecting its maritime territory, particularly the offshore oil platforms, and cracking down on maritime crimes like drug trafficking (or other types of smuggling) or illegal fishing. However, this author argues that submarines are hardly the appropriate platforms for these tasks. A fleet of oceanic patrol vessels (OPVs) along with a robust air wing would be more suitable for coastal and oceanic patrol, including the interdiction of suspicious vessels.

In his September remarks at NBAR, Admiral Ferreira explained the need for Brazil to possess a blue water Navy in case of a hypothetical armed conflict in the South or East China Seas. This author has not found a direct correlation between the two issues: if an incident took place, would Brazil need to deploy its platforms to the open seas in defense of freedom of navigation? While the Admiral’s statement is not clear, the wider goal is to obviously increase the power projection of the Brazilian Navy by making it a blue water navy. This explains PROSUB’s priority, as this will be a major source of pride regarding the country’s naval capabilities, including the ability to manufacture these platforms.

Additionally, Admiral Ferreira highlighted that the Brazilian Navy is a dual-purpose navy as “we are not just a war-fighting Navy like the U.S., we have other collateral tasks, we are coast guard, we are maritime authority for safety of the sea [and] we have lots of tasks in the Amazon basin.” Indeed, the Brazilian Navy has a variety of tasks. However, the question remains if a fleet of four Scorpène-class submarines and one nuclear-powered submarine are the ideal platforms to carry out these duties when OPVs and frigate-type platforms (which the Navy is upgrading) are more suitable for these tasks.

One thought on “The Status of Brazil’s Ambitious PROSUB Program”