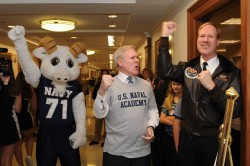 In a surprise announcement yesterday, Secretary of the Navy Ray Mabus reversed a key portion of the initiative known as “The 21st Century Sailor.”  After the fleet-wide failure of his “breathalyzer on every quarterdeck” policy, Mabus announced that the Navy would not only do away with the newly installed devices, but bring back the tradition of alcohol rations.  The announcement was all the more stunning as it came after a period of 24 hours in which no one could seem to find the Secretary.

“Today’s Sailors understand leadership and motivation,” Mabus said to reporters at the U.S. Naval Academy, who filed into Mahan Hall Auditorium for a hastily assembled press conference.  “After spending the evening with the combat-leaders-in-training on the Academy’s Varsity Cheerleading Squad, exchanging ideas at various establishments around Annapolis, I became convinced we need a course change in our policy. We need spirit back in the U.S. Navy!”

Sources close to the Annapolis discussions say the cheerleaders’ original intent was to get Secretary Mabus to seek additional funding for the squad’s upcoming travel arrangements to football away games, but that Mabus seemed to become single-mindedly focused on the effects of alcohol after misunderstanding one cheerleader’s discussion of spirit and Sailors.

In a rare bit of candor, Mabus acknowledged the unusual nature of the announcement and burdens of naval service. “I understand this is a dramatic shift,” said Mabus at the Academy, “but it is also sensible.  Our Sailors know that we’re separating them for their families or from service, capping their pay, and looking into cutting their benefits.  We need to offer them a new benefit to brighten their day.  That’s why I’m bringing back the daily spirit ration.  It’s time to splice the main brace.  That’s right, Grog is back!”

In 1862 the spirit ration was removed from Navy enlisted messes, but the Navy Secretary at the time, Gideon Welles, allowed “ales, beer, wine, and other non-distilled spirits” to remain in the officer’s messes.  It wasn’t until Secretary Josephus Daniels signed General Order 99 in 1914 that the spirit ration was removed completely.  Since that time Officers and Sailors have been stuck with a “cup of joe” as their beverage of choice.  “Today’s Sailors and Marines are responsible professionals,” said Captain Mike Pussers from the Secretary’s staff, “treating them as such and offering minor and responsible usage just makes sense.  It’s kind of like how you don’t see binge drinking in Europe because they don’t make a big deal of prohibiting kids from having a beer.”

When contacted for comment, the U.S. Naval History & Heritage Command pointed out that this year the Navy has been relearning many lessons from its experiences in the War of 1812.  It makes sense that historically successful leadership techniques might return as well.  However, despite suggestions from a number of captains in the Navy’s surface fleet, the JAG Corps firmly denied that the return of the lash and walking the plank are also on the table.

Responses to Secretary Mabus’ announcement were mixed across the country.  “Sailors are drunks, we all know it,” said Westin Johnson IV, of the Navy League’s Tennessee Chapter, “that’s just the way it is.”  He was supported by Lawrence Sherman of the American Society for Temperance in the Sea Services.  “They simply can’t be trusted,” Sherman told CIMSEC in a phone interview, “I thought Ray understood that when he made them start blowing the tubes.”

Reached for comment in Annapolis, noted maritime expert Bill The Goat said, “Yes, yes, yes, we do.  We love spirit.  How about you?”  Senator Jim Webb (D-VA), a USNA grad, combat decorated Marine and Secretary of the Navy during the Reagan Administration, agreed.  His staff pointed out that he’s been telling people that Sailors and Marines are responsible professionals for years.  “We do have a really stressed force,” the Senator pointed out when he advocated for a new look at General Order #1 in Afghanistan.  He suggested that sometimes having a drink, in a limited and responsible way, can have a positive impact on Marine’s and Sailor’s lives and can be a leadership and motivation tool.  According to members of his staff, Senator Webb supports the new imitative and is quoted asking, “Man, why didn’t I think of this when I was SECNAV?”

When reached for comment, Secretary Mabus’ office said the details for the grog’s return are still a work in progress.  “Following the model we used to study our allied forces in implementing the repeal of ‘Don’t Ask, Don’t Tell,’ the Secretary plans to examine a number of different options,” said spokesman LT Alice Dawson.  Studies are reportedly planned on the wine service aboard French warships, the beer service aboard British ships, and other similar allied methods.  “The Secretary himself has volunteered to lead a select test group among our allies’ vessels to sample their spirits and determine the best way forward.”

A Master-at-Arms involved in the tests told CIMSEC, “Can you imagine, I get to make port calls all over the Med to visit our allies and drink on their ships…now this is real partnership building.”

“This is great,” said a Second Class Petty Officer interviewed by CIMSEC, “not only does it look like SECNAV finally trusts us, but I may get the chance to relax for 12 seconds after rushing between scripted drills that go the same way every time and staying up all night working on computerized admin baloney!”

In an ALNAV message released by the Secretary later this morning Sailors will be required to complete 3 NKO courses prior to consuming each spirit ration.

2 thoughts on “SECNAV Reintroduces Grog to the Navy”