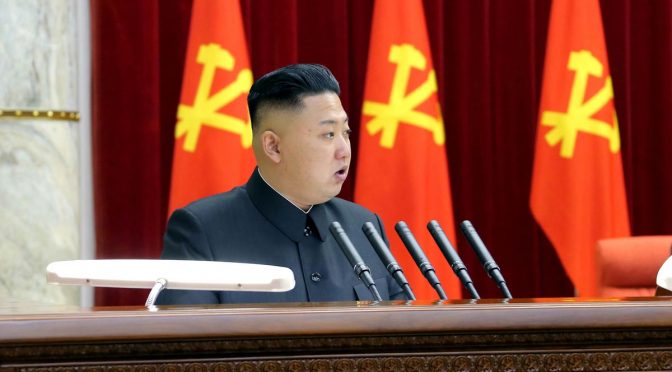 The Korean peninsula now has more than one unpredictable player on the field. This gives substantial fresh upside in the potential to find solutions on the peninsula – with the downsides more terrible than ever.

On the campaign trail, his inauguration, and now as the maxim of his press team, Donald Trump has laid down a promise to shake up Washington in ways that no other politician could. While the jury is still out on whether the domestic politics as usual tug-of-war has been upended with a new president in town, Mr. Trump’s position as a political outsider and foreign affairs neophyte is having immediate and tangible consequences for United States foreign policies across the globe. Donald Trump’s occupancy of the White House has infused unpredictability into American foreign policy in ways that have been cautiously avoided for most of the last four decades.

Nowhere is this newly founded unpredictability more salient than in North Korea. The Korean peninsula is home to a frail, 64-year old ecosystem of stability built on military might, big power politics, and constant commitment problems. Stable predictability is the foundation of this tenuous Korean peace, and Donald Trump’s penchant for shooting from the hip and upending convention could crumble that foundation and send Korea’s fragile ecosystem of stability up in flames.

The frailness of the Korean peace is exactly what gives President Trump’s Korean policy such incredible leverage. Whether it is threatening trade wars with China, loosely considering first strikes against the North Korean regime, or brokering peace through a hamburger summit with Kim Jong-Un, the chance that President Trump’s foreign policy decision making will fall outside of the acceptable mainstream means that all other players involved need to rethink their priors and reexamine their strategies. Principally we assume this means the North Korean regime itself must rethink the location of the red lines it so often toes as a core tool in its foreign policy toolbox.­

Chinese North Korean Policy in the age of Trump

The player that has the most to think about is North Korea’s foremost ally and benefactor – China. Donald Trump’s unpredictability may be able to pressure China into taking decisive action with North Korea, especially if it believes that further nuclear development may lead to a preventative first strike from American military forces. Trump’s firing of missiles at a Syrian airbase has created the perception American destructive force is more predisposed towards use than it was during the Obama presidency. A perceived penchant for quickly executed military action gives Donald Trump certain advantages that a calculating, forward thinking President Obama did not have. The Obama White House launching a sudden, unilateral preventative strike against North Korea seemed a remote possibility. Would we see the same cool-headed restraint with Mr. Trump in the Oval? That becomes less clear.

If the Trump administration takes this unpredictability to the Korean peninsula, China will see itself stuck between two bad choices – watching as the North Korean regime is attacked and perhaps toppled by an external force waging war in China’s own backyard, or take part in isolating a North Korean regime that would crumble onto itself when it is cut off from foreign currency and vital agricultural and energy inputs. Of course, China has many intervening policy choices that it can make between those extremes – with the most likely being pressuring Kim Jong-Un enough to denuclearize but to remain short of imperiling the regime’s survival. Should Kim Jong-Un remain incorrigible, China has other strings to pull within the North Korean leadership. And pull those strings it would, if China credibly believed that an American first strike was credible and imminent.

The U.S.-ROK Alliance and North-South Relations

There are other channels through which President Trump’s disdain for convention could lead to shifts on the peninsula. Mr. Trump has put sacred cows of American foreign policy on the table before, including expressing discontent with the U.S.-ROK military alliance. That President Trump would be somehow more reverent towards the thrice yearly U.S.-ROK join military exercises seems doubtful. He has floated that it is possible that the U.S. would ‘go it alone’ on North Korea without Chinese assistance; would that threat extend to sidelining South Korea in potential peace treaty talks? If these issues are at least perceived as being on the table, the Trump administration could set the stage for the kind of grand, two-track bargain that is the only real diplomatic way forward for all players on the Korean peninsula. That includes North Korea taking serious steps on nuclear talks, and opening the door to Complete, Verifiable, Irreversible Disarmament; and it also includes the U.S. and South Korea making credible commitments toward diplomatic recognition of the DPRK and moves toward a peace regime on the peninsula.

There are other ways the Korean stalemate can break, and not all of them include a U.S.-led offensive or even U.S. led negotiations. A U.S. ‘go it alone’ attitude moves the meter for Korean calculus on both sides of the DMZ, creating common cause among Beijing, Pyongyang, and Seoul. Pyongyang may see value in walking back the recalcitrant position it has taken towards China and attempt to move toward mending ties. A history of capriciousness and the domestic political factors that Kim Jong-Un must satisfy to stay in power may make the credibility of a North Korean commitment seem laughable. But it is important not to underestimate how much importance Beijing places on the continued existence of the DPRK as a buffer state that keeps U.S. influence at bay and U.S.-ROK military capabilities pointed at Pyongyang (instead of Beijing). Kim Jong-Un could offer Xi Jinping an off ramp to deescalate tensions and temporarily lower the chances of U.S. intervention. Xi may take that off ramp to return to the status quo and maintain North Korea’s position as a key strategic buffer.

The biggest shift may come from the advantageous negotiating position in which Seoul finds itself. The South Korean public is again ready for another round of North Korean engagement; a liberal president (may) sit in the Blue House, who sees himself as the heir to the country’s democratic, engagement-based legacy. South Korea may see itself as being sidelined in deciding its own future; and most importantly, a few missiles casually lobbed at an impending DPRK ballistic missile test can escalate to reprisals on South Korean citizens or all-out war. These circumstances give Seoul leverage over inter-Korean and regional events that it has not enjoyed for decades, perhaps even since the beginning of division of the Peninsula. As military and economic threats close in on Pyongyang from both the U.S. and China, a desperate Kim Jong-Un and a Moon Jae-In trying to break South Korean foreign policy out of its conservative mold may become natural allies in trying to diminish tensions and avoid large scale conflict.

For all the possibilities we see in Trump’s unpredictable foreign policy, we cannot forget that upending the ecosystem of stability carries huge risks and terrible downsides. North Korea suffers from serious conventional military deficiencies and an authoritarian government constantly in fear of being deposed; an unpredictable Trump means their own margin of error for survival is unpredictably slimmer. North Korean officials have been explicit in that they will act first if they believe war is imminent – Trump moving carrier groups to or starting a troop buildup in Korea could be the spark that reignites a major land war in Korea.

The Trump administration walks a very fine line. It must understand the reputation it has built, and operationalize that reputation to push a real deal on the peninsula. This is a once in a generation opportunity for a comprehensive strategy: showing it is serious in its potential actions, so as to cajole China into action and Kim Jong-Un to the negotiating table; while at the same time being prepared to make big moves on military exercises, denuclearization, and peace deal negotiations when the time comes.

Without a comprehensive strategy, this is just two crazy people playing a game of chicken; a prospect made all the more the more terrifying when civil war and nuclear weapon use is on the line. President Trump has a window of opportunity to make big progress on the Korean peninsula. His reputation precedes him; he just needs to put it to work.

Travis Lindsay studies international security at the UC San Diego School of Global Policy & Strategy. He is a part of the CSIS Pacific Forum Young Leader program, and has previous experience at the Korea Economic Institute of America. He writes on U.S. foreign policy and energy security in East Asia, and has published with both The Diplomat and The Peninsula on Korea issues. He can be reached at tdlindsay@ucsd.edu.

Featured Image: North Korean leader Kim Jong-un speaks during a plenary meeting of the Central Committee of the Workers’ Party of Korea in Pyongyang March 31, 2013 in this picture released by the North’s official KCNA news agency on April 1, 2013. (KCNA via Reuters)