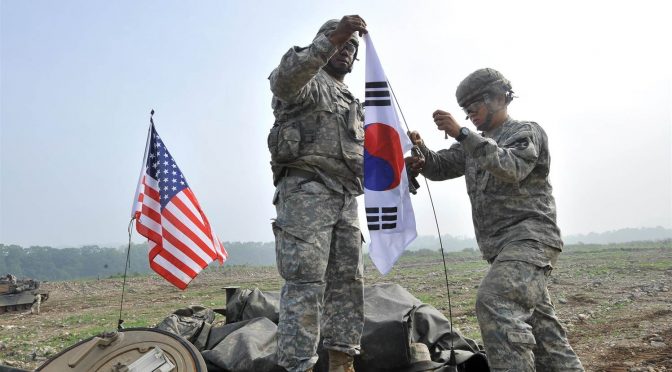 As we approach the halfway mark of 2017, the geopolitical narrative this year has been dominated by North Korea and its enigmatic leader Kim Jong-un. Bluff and bluster from Pyongyang is nothing new. However the last few months has seen tension rising to unprecedented levels and the rhetoric seems to be a lot more threatening – nuclear war with the United States at the top of the heap.

He has repeatedly demonstrated his missile capability either through launches into the sea (with questionable results) or at spectacular military parades. He is determined to develop an ICBM with only one obvious target. In this year itself he has launched seven missiles of various types and trajectories including an IRBM, the Hwasong-12 on 14 May, and another medium range missile on 21 May. Experts believe that each effort is bringing him closer to realizing his ICBM dream. What has led Kim to escalate this antipathy toward the U.S. to this extent and send out a very clear and unequivocal message that these developments are all aimed at the U.S. and its regional allies?

Kim Jong-un has been variously described as a despot, a mentally unstable leader and even a schizophrenic who blows up close relatives with anti-aircraft guns on frivolous excuses. Increasingly there is a perception that underlying this unpredictable exterior is a very shrewd mind  that allows the world to think him so and thereby keep everybody on edge. To retain absolute power in a political structure such as North Korea’s would require a great deal of cunning and skill because oppressive and totalitarian regimes beget palace intrigues, covert conspiracies, and palace coups. This kind of one-man authoritarianism also breeds megalomaniacal tendencies which is perhaps what is happening in this case with a young leader who wields absolute power and is largely unchallenged in the exercise of that power. However, such a leader cannot function without a supporting military structure and trusted generals, some of whom themselves must be wielding enough power of their own and are content to let him function so long as their own power structure remains intact.

The display of awesome military might at ceremonial parades and frequent missile launches may also be a brave attempt to battle internal insecurities and play to a domestic audience.  This audience can be led to believe that the outside world is ganging up on them and therefore the great leader is developing disproportionate military power to safeguard the nation, which for a starving and economically backward population is a small price to pay against externally-imposed destruction. To the outside world at large, Kim needs to be better understood and perhaps a judicious mixture of the carrot and the stick is essential to contain this rhetoric which he may soon himself come to believe.

Determining the Credibility of the U.S. Response

The U.S., which should be the most concerned about this escalation in North Korea’s missile ambitions, could perhaps adopt one of three approaches – confrontational, conciliatory, or just plain indifference. None of these offer a satisfactory solution in themselves and a comprehensive strategic approach could perhaps offer a way ahead with a combination of all three. If the U.S. is looking to adopt a predominantly confrontational approach as indications from the current administration so far suggest, it needs to do a lot more than it is doing or has even shown an inclination to do. The famous ’pivot’ or ‘rebalance’ initiated by President Obama should have sent a clear and unequivocal message to the U.S. friends and foes alike in the region but ended up doing just the opposite. It not only created doubts about the U.S. commitment to the region amongst its allies but also emboldened its foes who perceived it as weak and ineffective. President Obama’s failure to act on the red lines he himself drew up on Syria and the Ukraine further eroded U.S. credibility in the Indo-Pacific. Irreparable fault lines have developed in ASEAN as countries increasingly veer towards China as insurance for their future well-being. The commitment expected of a superpower which hopes to shape the 21st century world order with a near-peer competitor breathing down its neck has been sadly absent.

However, notwithstanding this reluctance to act, there was a maturity and sagacity in the U.S. leadership and reaction to global events which inspired confidence. However, November 2016 changed all that. The foot-in-mouth outbursts from President-elect Trump on important foreign policy issues sent alarm bells ringing amongst all U.S. allies but there was still hope that the responsibility that comes with being the president of the U.S., the most powerful country on Earth, will make him come to grips with reality and shape a mature outlook. Unfortunately, the lack of any coherent direction in U.S. foreign policy initiatives has greatly eroded its image and a large part of the blame for that is attributable to the president himself. In the context of this article, his statement that South Korea would have to pay $1 billion for the THAAD system only to  be retracted a day later by his administration speaks volumes about the foreign policy crisis facing the USA. The initial grandstanding on China only to ultimately accept meek acquiescence reflected an immaturity that bordered on the absurd and which regimes such as China’s see as a sign of great weakness and a vulnerability waiting to be exploited.

The final nail in the coffin was the ridiculous USS Carl Vinson affair of the missing CSG which not only damaged the professional image of the U.S. Navy but also exposed dangerous chinks in the abilities of the president’s administration, something the USA can ill afford at this moment.

Seeing this spectacle play out would have been a source of great rejoicing in China. From a  situation last year when pressure from the U.S. at least got China to make the right noises about the need to rein in North Korea, nothing of the sort has happened this time. Rogue states such as North Korea are rarely amenable to reason and therefore need to be kept in check by their biggest benefactors who are unwilling to do so for precisely the same reason. It is a well- known fact that China is North Korea’s biggest benefactor and despite being a permanent member of the UN Security Council, and thereby on the top table of a rules-based international order, has been complicit in funding and proliferating nuclear technology, expertise, and material to North Korea. China is also not so naïve as to have created these nuclear problems without retaining some element of control over their programs. However, this is now a handy geopolitical tool for China to keep its adversaries, principally the U.S., Japan, South Korea, and India on edge. The virulent Chinese opposition to the THAAD installation in South Korea was perhaps attributable more to this edge being blunted than any specific threat to China itself. The six-nation formula which was meant to rein in the North Koreans has been an abject failure mainly because of the Chinese intransigence to play honest broker and initiate any concrete action against North Korea.

Even after North Korea’s recent missile tests, China made a few perfunctory noises, mobilized a few troops on its border with Korea, and stopped a few coal carrying trucks after which it was business as usual. For some strange reason, these actions seem to satisfy the West who can perhaps not suggest anything better in the absence of a coherent strategy of their own in checking North Korea. Insofar as North Korea is concerned, this was reaffirmation of Chinese support in the event of a confrontation with the U.S. North Korea’s belligerence toward the U.S. is playing directly into Chinese hands as U.S. preoccupation with the Korean peninsula gives China unfettered opportunity to consolidate its position in the South China Sea and indeed in the entire Indo-Pacific.

Perhaps the most unflattering situation in this entire imbroglio is that of the U.S. in the region, primarily because it is not sure of its own position and as a result is creating great uncertainty in the minds of its closest allies, particularly Japan and South Korea. In the event of an escalation in the stand-off between U.S. and North Korea, it may be Japan and South Korea which will bear the brunt of Kim’s likely irrational response. This would not be acceptable to either nation and if the U.S. is unable to reassure its allies in the region with a credible plan to thwart North Korean aggression then it is unlikely to garner the unconditional support it expects.

It is therefore quite evident that Kim is going to continue making news for the rest of 2017 and beyond. Reason will take a back seat in his quest for an ICBM. The only country that could prevail upon him to curtail this ambition is China which has shown no inclination to do so thus far and is unlikely to do so as part of its own larger strategic design. It may even in fact offer clandestine support as it has done in the past in gross violation of international non-proliferation norms. The U.S. needs to get its North Korea policy in place as part of a consistent, mature, and well-thought out overall foreign policy addressing the concerns of its allies. Countering North Korean belligerence with ad hoc reactions like diverting a couple of CSGs is neither a strong enough signal of intent nor adequate for the message it wants to send across.

Commodore Anil Jai Singh is an Indian Navy veteran whose commanded four submarines and one ship. He is presently the Vice President of the Indian Maritime Foundation. The views expressed are personal. He can be contacted on ajaisingh59@gmail.com and on twitter @ajs_subdriver.

Featured Image: U.S. soldiers hang a South Korean flag on the top of their tank during a joint exercise in the city of Yeoncheon on May 30, 2013. (Jung Yeon-JE/AFP-Getty Images)