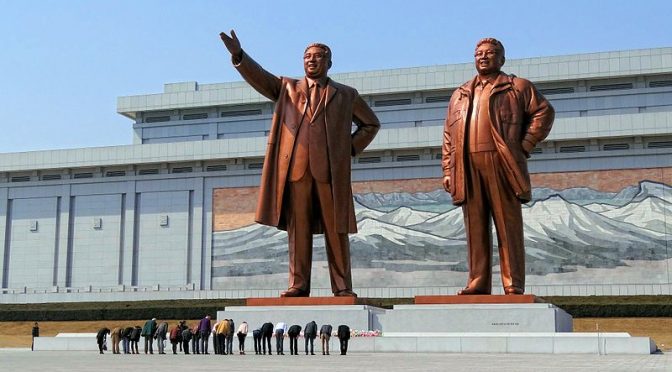 A useful exercise in considering courses of action that could be taken in response to a North Korean collapse is to skip ahead to the aftermath. However and whenever the Kim regime falls, it will be ugly – but some kind of end state will follow. Identifying the most desirable (or least undesirable) one will be critical to planning for North Korean contingencies. After all, how can one plan without an objective? Considering outcomes enables us to write policies that increase the likelihood of our preferred end state, while also helping guide contingency planning should something else actually occur.

We may postulate three basic outcomes:

Before getting into those, a couple preliminaries must be stated first. The North Korean government has continually stood since 1948 because its neighbors have been able to live with it. This is not to pass a moral judgment, but simply to note that since the 1953 armistice was signed, no interested party has found dislodging the Kims to be worth the price. North Korean nuclear capability certainly changes the calculus, but the fundamental result appears to be the same so far. The existence of North Korea provides certain conveniences in other matters. For China, it provides a buffer zone between it and a U.S. ally on the East Asian mainland, as well as a client state with which it may deniably perturb the West. For Japan, to whom geography gives a vested interest in peninsular affairs, the standoff prevents Chinese influence from dominating all of Korea – and also prevents a unified Korea rivaling Japan’s eminent position in Northeast Asia. And for both Japan and the United States, the North Korean threat justifies the presence of defensive forces – to include missile defenses – that are intended for defense against Korea but could also be used to keep the Chinese in check.

With all this mind, how could the three basic scenarios play out?

This is actually more reasonable than it might seem. A long tradition of existence is as good an indicator as any that the Kim regime knows how to stick around for the long haul. Nuclear brinksmanship will occur and deterrence will be tested, but fundamentally things will remain stable, if uneasy, in this scenario. For reasons described above, the situation has proven sustainable on the international stage.

Unfortunately, this does nothing to change the thousands of artillery tubes pointed at Seoul, but the status quo has still been decent enough for the South to amass one of the world’s largest gross domestic products. The Republic of Korea has made the best of the hand it’s been dealt, and will likely continue to do so. Not so much for the people north of the armistice line – but that appears to be the price of stability.

Reunification by the ROK

Should the Kim regime fall, another authority will have to fill the vacuum. The Republic of Korea would be the natural choice, and is sure to be the United States’ preferred option. However, this scenario places the Republic on the border of the People’s Republic of China. For the PRC to go along with this, U.S. forces will probably need to vacate the peninsula as soon as initial stability operations are completed. Continued U.S. relations with a unified Korea will become less a matter of our bilateral relationship and more a matter of how it plays vis a vis China.

However, diminished U.S. influence in Korea may not be to Japan’s liking. Undoubtedly a newly reunified Korea would be inward-focused for several years as it integrates the north into the peninsular and world economies – but the ROK would emerge stronger for it. Without the everyday American presence it has now, the unified Korea may attempt to assert itself on the world stage in ways counter to Japanese interests, not to mention those of China. We may again see Korea as a platform for competing international influences, as the 1890s saw between Japan, China, and the so far unmentioned but very-present northern neighbor, Russia.

War is a contest of probabilities, and no result is preordained. It is entirely possible that the Kim regime may fall, but could take Seoul with it, leaving the Republic of Korea just as dead as the People’s Democratic Republic. With no obvious authority, a new power would fill the vacuum. It may be a Maoist movement to succeed the Kims, a Korean nationalist one, or something else harder to predict. Whatever the case may be, any authority other than the ROK is likely to be less amenable to Western interests. The Republic essentially owes its existence to the UN effort of the 1950s and continued American presence thereafter. A post-ROK state would not feel the same obligations toward its predecessors’ enablers.

Reunification is not a foregone conclusion, even in the event of the Kim regime’s fall. It may be that the two Korean societies have simply diverged so much since the 1940s that a merger is no longer possible. Or it may be simply that power politics interferes.

As noted above, China values a buffer between it and the U.S. forces in South Korea. It could maintain this by invading the moment the regime collapses and establishing control of the North’s territory before the ROK (with U.S. support) can do so. It could then set up a puppet state and demand global recognition of its fait accompli.

At greater length, a similar outcome could also be achieved via a hybrid war effort in a destabilized North Korea. No doubt the Chinese have studied Russian operations in Ukraine. Even if the ROK controlled all of Korea on paper, a push by Chinese “little green men” could establish a frozen conflict keeping the ROK and its Western allies off balance. An ephemeral Korean version of the Donetsk People’s Republic might be good enough for China’s purposes.

It is conceivable that a wartime stalemate or diplomatic impasse leads to further partition of North Korean territory, reminiscent of Germany after World War II. Different players could have sectors, including China, the Republic of Korea, the U.S., and, just possibly, Russia. If such an occupation scheme was to go into place, it would almost certainly be an arrangement exclusively by the states involved. The presence of multiple veto-wielding members of the United Nations Security Council implies the UN will probably not have much utility.

What we think will happen is not necessarily what will happen. If one believes history arcs toward justice or that despots always fail, it is easy to blithely assume Korean unification is just a matter of time. This analysis reminds us it is not. Many potential outcomes exist and each will have unique second- and third-order effects. Some of the likelier effects can be identified, and today’s diplomatic efforts and operational planning may be able to mitigate them, and even nudge events in a preferred direction. Perhaps more importantly, the relationships built and knowledge gained in hedging against the North Korean challenge will enable quick, effective decision-making when something completely different occurs.

Matt McLaughlin is a Navy Reserve lieutenant commander, strategic communications consultant, and Naval War College student whose opinions on matters large and small do not represent the Department of Defense, Department of the Navy, or his employer.