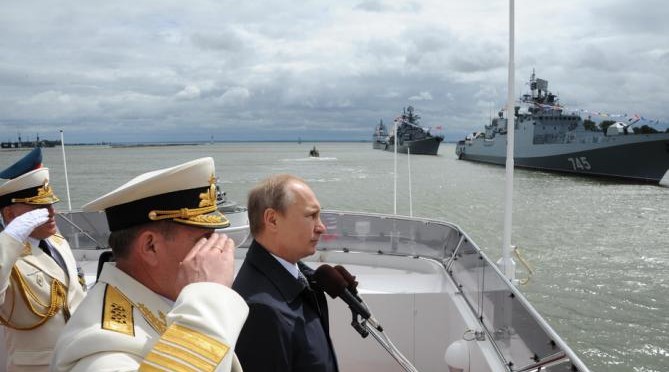 This article originally featured on CIMSEC on Sep. 3, 2015 and has been updated for inclusion into the Russia Resurgent Topic Week.

To inaugurate the Russian Navy’s new doctrine, President Vladimir Putin met with Deputy Prime Minister Dimitrij Rozogin, Defense Minister Sergej Šojgu, Commander of the Navy Viktor Čirkov, and Commander of the Western Military District Anatolyj Sidorov aboard the frigate Admiral Gorškov on July 26th to discuss the latest draft of the Maritime Doctrine. The doctrine itself is a comprehensive look and revision of Russian naval goals and strategy, from improving living standards of sailors to expanding Russian naval reach in the North Atlantic and Arctic regions. The ultimate goal is to restore the Russian Navy as a blue water force.

With Russian concerns over NATO once again coming to the forefront, the document outlines a plan to have a permanent naval presence in the Mediterranean as well as increasing the existing Russian naval presence in the Black Sea, Atlantic, and Arctic oceans. The Arctic is seen as key to the Russian Navy strategy due to the abundant natural resources in the region, as well its position as a strategic link between the Atlantic and Pacific Oceans. Control of the Arctic would give the Russian Navy an easy passageway connecting the North Atlantic and North Pacific.

The new strategy calls for the construction of new nuclear-powered icebreakers to allow access to the Arctic. Shipbuilding was largely abandoned after the fall of the Soviet Union. Recently, Russia has begun a program of naval vessel building to supplement a program of naval vessel building to supplement and replace its aging Cold War era fleet. Since the 1990s, however, only submarines and smaller vessels such as corvettes and frigates have been built. Exacerbated by Russia’s current economic troubles, the Federation currently lacks the shipbuilding expertise and facilities required to construct large modern warships. Only a quarter of Russia’s current fleet is capable of conducting blue water operations.

According to Deputy Prime Minister Rozogin, Russia’s new naval doctrine was decided as a result of NATO’s eastward expansion. Former Russian Navy Commander Maxim Šepovalenko, a military expert at the Russian think tank Center for the Analysis of Strategies and Technologies, suggests that the new doctrine is built on a strategy preparing for an imminent confrontation with the US and its allies.

With a sustained presence in the Crimea, Russia now has greater access to the Black Sea and possibly the Mediterranean, especially if Russian attempts to improve relations with Turkey and Greece 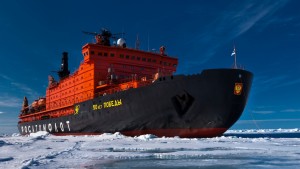 are successful. The annexation of Crimea in 2014 was primarily to ensure Russian control of the naval base at Sevastopol, which had been heretofore leased to Russia by the Ukrainian government. To this end, the document notes improving the infrastructure at the Sevastopol base as a priority, as well as the completion of further strategic infrastructure in the Black Sea region.

As for the Pacific and Indian Oceans, the document urges further cooperation with India and China. Shen Shishun, director of Center for South Pacific Studies at the China Institute of International Studies, stated that he believes that cooperation between Russia and China on naval issues would be beneficial, citing China’s expansion in the Pacific Ocean as an example of like strategy. Both Russia and China plan on continuing a series of joint naval exercises in the Sea of Japan after Joint Sea 2015 in the Mediterranean, and Russia and India have plans for joint “Indra Navy 2015” exercises as well.

Though Russia is desperately seeking re-entry into the blue-water navy club, it remains an open question whether or not they will meet their goals anytime soon. Economic difficulties, clashes with European nations previously willing to sell technology to Russia, and a lack of expertise in capital shipbuilding threaten to sink Russia’s naval revival. Perhaps Russia will be able to piggy back off China’s attempt to create a first-rate navy and use their finds to aid their old ally India. What is clear, however, is that Russia intends to create a navy capable of deterring the United States and NATO, as well as China should push come to shove in the Pacific (albeit for now Russia seems to be content with cooperation with the rival Asian power). What is of greatest concern to American strategic planners is Russia’s interest in control of the Arctic and the natural resources in the waters there. Russian control of the Arctic is a possibility that should not be dismissed lightly.

Sean MacCormac is a 2008 graduate of the University of Virginia and a 2013 MA graduate of Austin Peay State University.  He can be reached at sean.j.maccormac@gmail.com.

The featured image from this post is from the AP.