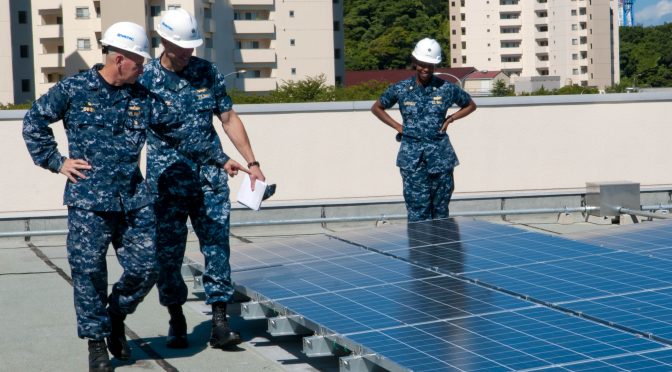 Philippines President Duterte announced last month that he wanted all U.S. forces out of the Philippines in two years, leaving U.S. policy makers to find an alternative naval basing strategy for the region. The presence of U.S. naval forces in the Philippines can be traced directly back to Commodore Dewey’s command, “You may fire when you are ready, Gridley,” utterly shortly before a fleet of U.S. Battleships entered Manila Bay to liberate it from Spanish rule in 1898. At the time, Alfred Thayer Mahan’s work The Influence of Sea Power upon History had popularized the need for a strong U.S. merchant fleet, battle fleet, and network of naval bases. The taking of Manila Bay would give the United States its first taste of colonialism and the ability to operate U.S. ships from a homeport far away from the United States. With today’s political landscape changing in unstable ways, it is time to rethink any assumption about U.S. naval basing and power projection. Surface ships and naval basing platforms need to capitalize on unique forms of energy that surround them starting with solar, kinetic, and wind power.

Emerging clean technologies have presented many alternative forms of power generation, but none have been able to replace the energy dense and ubiquitous nature of diesel. Despite a strong commitment after World War II under Admiral Rickover towards a nuclear Navy, today’s over reliance on diesel is epitomized by the Arleigh Burke-class Destroyer (DDG). This modern destroyer was commissioned in 1991 with seven gas turbine engines used for propulsion and power generation. Although having an extremely high power to weight ratio, gas turbine engines are fuel hogs and have left the U.S. surface fleet tethered to supply ships. In the two-and-half-decades since commissioning, the Arleigh-Burke-class has been improved with better combat systems, faster projectiles, and even hybrid-electric drives. But the Navy has not fundamentally readdressed Mahan’s assumptions on resupply and fuel-burning energy generation. The Navy needs to find solutions that unburden U.S. national security from a dependence on countries with strategically-located deep water ports. The issue of naval basing on foreign soil isn’t a political problem, but rather a technological one.

Solar power has been historically difficult to employ due to low efficiency, expensive equipment, and the need for a lot of space to gather sunlight. Successful application of solar has typically been to supply individual households with power. An Italian company has put a twist on this small-scale solar model by placing solar panels on floating platforms in residential lakes and ponds. This solution allows the arrays to rotate toward the sun, utilize otherwise unoccupied space, and cool equipment more efficiently. This year, researchers in Vienna have developed ocean wave dampening technology that will allow large floating platforms of solar arrays to be deployed with less risk of damage from waves at sea. Although floating solar arrays are not employed by the Navy today, this development may make sea-based solar arrays a project of interest in the future. When complete, the Heliofloat will be the size of a football field and generate solar energy for use on shore.

The Heliofloat is getting attention from the solar energy community because it aims to leverage a large expanse of unutilized space. This same attitude can be applied to ships at sea. We overlook the paradox of sailing tightly cramped ships on the vast openness of the ocean. Naval architects and engineers work to fit as much as possible onto ships, but this mindset leaves out the potential for employing the open space around the ship for a useful purpose. Ohio-based startup Xunlight has developed large flexible roll-up solar arrays that could be used for solar energy generation outside the skin of a ship. Sailmakers have already started using this technology in the sails of commercially sold sailboats, demonstrating the material’s resilience and versatility. Like the solar sails of Jules Verne’s novels, Navy ships could employ large outriggers with quickly deployable solar arrays to collect the sun’s energy. Although impractical for many scenarios – in transit, in high seas, or winds – ships could make use of this solution during loiter operations. These solar sails could be designed to disguise ships from radar, or make them appear like an entirely different class of ship. A deployable roll-out solar array would be an easily prototyped green energy solution for ships today.

The Navy is currently testing the Azura Wave device off the coast of Kaneohe Bay in Hawaii. This single device is capable of generating 20 kW from the motion of the ocean. To put that in perspective, the average Hawaiian consumes 17 kWh per day. This buoy, in optimal conditions, is offsetting the daily power consumption of one average Hawaiian resident in one hour. Although this may not seem like much of an impact, it proves that it can be done. Two more companies are planning to test similar devices capable of producing 500 kW. In the not so distance future, kinetic generators like this might be anchored in a grid and secured to Heliofloat-like platforms for combined kinetic-solar generation. Through the combination of different alternative energy projects, yields can be increased to levels competitive with fossil fuel systems.

At the time of writing, winds in the central Arabian Gulf
are blowing at 23 knots. This is just fast enough to produce 5,000 kW with a 282 ft long Sheerwind wind tunnel, roughly the equivalent power production of two Allison generators aboard an Arleigh Burke-class DDG. Minnesota-based Sheerwind has developed a system to capture, concentrate, accelerate and harvest wind power in a funnel. The tunnels happen to be very big, but the installation of towers to collect wind could fit at the top of a ship’s stacks and ideally installed in line with existing diesel generation systems. This setup could allow the ship to use wind power when it was available and shift to diesel generation as necessary. This technology would have to be integrated into the design of a ship, but would be ideal for vessels required to operate for extended amounts of time in a single area.

When Mahan envisioned a battleship Navy, he was describing the prevailing example of concentrated seapower. When Mahan described the requirement for a nation to have a strong network of naval bases, it can be assumed that he was describing the need for sustained operations far from friendly coasts. Just as a Fleet in Being is useless unless it presents a legitimate danger of leaving port, a powerful Navy must be present to exert its will on the adversary. In maritime confrontation today, the challenge of finding and facing our adversary often becomes the key to success. For this reason, our current naval strategy of sea basing and sustained operations at sea will continue to be a central theme in the projection of U.S. military power. A glut of cheap oil may have slowed the progress of new Navy energy-related technology, but the emergence of a generation of cheap alternative energy sources and the clever employment of existing technologies can change this. The future of Navy operations is largely unknown, except that ships will always be required to spend long amounts of time at sea. High efficiency and ideally renewable sources like solar, kinetic, and wind energy should be an attractive addition to a ship’s power plant.