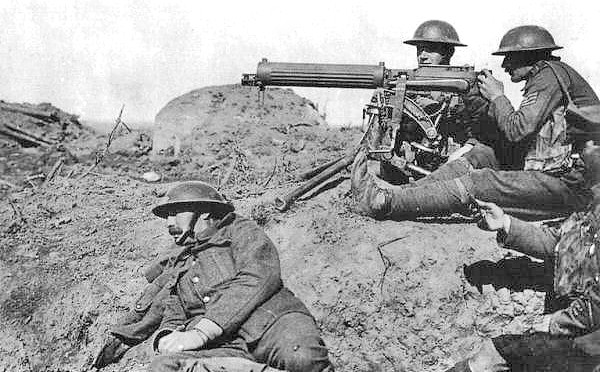 100 years ago today, in bunkers and boardrooms across Europe, the military and political leaders of a Europe that was being drowned in its own blood were attempting to solve the stagnant enigma of the Western Front. The traditional narrative of the First World War places the inability of military and political figures of the time to adapt to the previously unimaginable efficacy of modern defensive technology deployed on the battlefields of France and Belgium. While the popular narrative of the conflict usually ends with a nod to the tank and aircraft as the great mobilizers of the sclerotic armies, Stephen J. Biddle effectively argues with quantitative data, in his book Military Power, that it was in fact force employment (and the innovative tactics of the German Army) that broke the stalemate in the West and brought mobility back to warfare (see the Michael Offensive). The “modern system” of land warfare was born.

I’m reminded of Biddle’s illustration of the birth of the “modern system” when considering Distributed Lethality, not because I view the US Navy as antiquated as the armies of the old Europe, but because Distributed Lethality seems to be an intelligent effort at bypassing the tough and expensive learning curve associated with fighting the previous war by reorienting existing resources to meet new challenges. Within it appears to be the tacit recognition of the end of the aircraft carrier as the main instrument of maritime power in the types of 21st century A2/AD environments the US Navy is most likely to find itself fighting for dominance. Carriers will continue to be essential for the support of operations during the fight for dominance, and after it has been achieved in the maritime realm, but their time at the center of naval combat, contesting control of the world’s oceans, may well be over. Distributed Lethality is an attempt at defining the Navy’s future operational flexibility in the complex future of highly contested environments that preclude overuse of its most prominent investment.

At the same time, the reorientation of the surface fleet around the concept of increasing the fighting ability of individual craft within the current system may be too simple a concept to fully address the increasing complexity of the modern maritime environment, especially when that environment is seeing a proliferation of the number of actors able to potentially upset the capabilities of today’s Navy, with more advanced and capable anti-ship missiles, underwater sensors, and unmanned technology likely to be on the way. If the US Navy will have to engage in combat with a low to medium tier opponent within the next 17 years (the technology development timeline cited by Admiral Peter Fanta), then Distributed Lethality will be able to easily carry the day in the same way the Navy has been able to do in similar conflicts (maybe even at a lower price point). If the Navy is faced with a much more complex and determined threat (represented by a recent addition to the rank of top tier naval competitors, even just a regional one), then the concept of Distributed Lethality may be little more than a patch on the inadequacies of the contemporary Navy in considering the operational imperatives of facing and neutralizing that particular set of threats. It would seem to me that Distributed Lethality is, in fact, more a response to the emergence of a high tier threat (within a constricted budgetary environment) than a low to mid-tier threat, so its efficacy must be evaluated within this context.

The Navy, in its current state, could be considered the product of post-Cold War dominance (as Vice Admiral Rowden and Rear Admirals Gumataotao and Fanta explain in their Proceedings piece) and the attempts to take advantage of the concepts of network centric warfare and the revolution in military affairs (RMA) of the 1990s. This was done within the technological confines of the time period, and through the budgetary struggles of a US Navy competing for funds and defining itself within the budgetary narrative of the Global War on Terror. Its difficulties are manifest in the Navy After Next’s loss of its key platforms to cancellation and production truncation along with the discussions surrounding how the Navy will take on the A2/AD capabilities of today, let alone the future.

The US Navy now has a tremendous opportunity (in the face of rapidly evolving threats in the Asia-Pacific), that of being able to define itself within confines of its own primary operational environment, without the time and resource constraints of being actively engaged in combat. While the aircraft carrier’s time as the dominant maritime platform may be nearing the precipice of its decline, the rumblings within the military services and think tank sphere seem to point to the rise of Artificial Intelligence (AI), robotics, and the promise of additive manufacturing in the service of US operational and strategic needs, if the effects of their application can be grasped with full appreciation. If the US is to truly begin to push towards achievements that will open up the promise of network centric warfare and increase the ability to disrupt the defensive systems of the adversary (with acceptable costs in terms of equipment, money and lives) then we should be looking for cheaper ways to do that than through the Navy’s existing platforms, whose survivability and ease of replacement is questionable within the context of type of operational environment Andrew F. Krepninevich lays out in his excellent Maritime Competition in a Mature-Precision Strike Regime.

While Distributed Lethality is an important concept that should inform short and medium term planning (within the 17 year range that it takes to develop and deploy a new system), long range planning must begin now that takes into account the potential coming industrial revolution and advancements in AI and robotics that will bring about the full conceptual realization of networked warfare and unmanned systems. Their development could prove to be the real advantage in naval combat that will no longer feature a dominant aircraft carrier platform and will likely be the key to maintaining American maritime primacy in areas that have the potential to be seriously contested. Unlike the armies of 1917-18, the US Navy currently has the (limited) luxury of time and space to experiment. While the accusing finger of Kitchener, a draft notice, or more efficient bureaucracy could slowly make up for operational shortfalls during the Great War (still, at great human and financial cost), today’s strategic, technological and industrial imperatives are more exacting in terms of lost opportunities.

Ryan Kuhns is a master’s student at the University of Kentucky’s Patterson School of Diplomacy and International Commerce. He studies International Security and Commerce, focusing on defense economics, strategy, and the social/political organization of war.