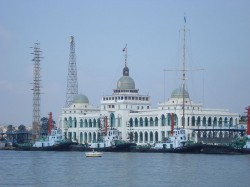 Reports began to circulate on local social media early several weeks ago, with cyber-activists citing the company’s website as saying that Seagull was capable of embarking/disembarking armed guards at locations, all approved of by the local government authorities, including Suez, Egypt.

According to a subsequent SCA statement, the reports “are categorically devoid of truth… and aim to shake security and spread false news,” however a report by the Arab Organisation for Human Rights recently revealed that the security company provides maritime security services for cruises and cargo ships passing through the Suez Canal in Egypt.

Despite the report, the SCA maintains that the Suez Canal is secured exclusively by Egyptian police and army forces.

2 thoughts on “Israeli Private Security in the Suez Canal?”