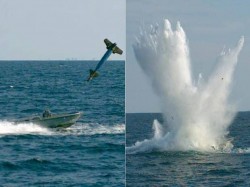 Corvettes, unlike offshore patrol vessels are meant for wartime use without major upgrades.  Their status as warships requires a satisfactory level of survivability against at the very least, common threats.

The design objectives for Corvettes, in regard to anti air warfare (AAW), is typically limited to self-defense. A typical self-defense suite as mounted on German K130 corvettes consist of a 76 mm rapid fire gun, rolling airframe missiles (RAM, short-range air defense / point defense), 27 mm auto-cannons and soft kill countermeasures. The shaping of the hull and superstructure indicates a moderate reduction in radar cross-section and some reduction in infra-red signatures was attempted as well.

This kind of defensive package can be effective against incoming missiles (preferably subsonic ones) and low-flying combat aircraft (threats similar to those the Royal Navy faced in the Falklands).

These aren’t the only common aerial threats, though: There are also guided bombs, specifically laser, TV and infrared guided bombs which cost so very little that a rolling airframe missile (of which only few dozen are on board anyway) costs more. 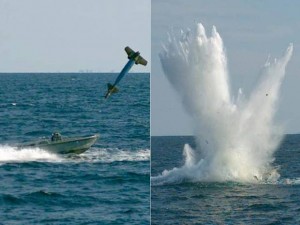 The U.S. Air Force demonstrated recently its ability to bomb a speedboat at speed with a laser guided bomb from high altitude, scoring a direct hit. Other munitions, meant for pinpoint attacks on land vehicles, could target and destroy the RAM launcher or the 76 mm gun from beyond their effective range, exposing the ships to almost unrestricted iron bomb attacks.

The proliferation of laser guided bombs since their invention during the Vietnam War leaves no choice but to consider them as a common threat munitions, and corvettes need to be survivable in face of this threat. This leaves but three options:

Point (3) deserves an elaboration: In theory a corvette in a picket role could serve as an area air defence missile launcher, cooperating with a separate search and fire control unit such as an AEW&C aircraft as long as the missile doesn’t require shipboard support during flight. The corvette itself does not need illumination systems if the missile seeker isn’t employing semi active radar homing and it doesn’t need an area radar search capability if it enjoys the benefits of a datalink to an AEW or AAW platform. Finally, it doesn’t need to possess a sophisticated AAW control centre, as its fire control can be done remotely, using cooperative engagement capability (CEC). If the Corvette and the controlling unit are equipped with this capability, the Corvette needs only a few vertical launch silos to be able to engage the attacking aircraft rather than weapons it drops.

Corvettes are of course not intended for employment as task force ships, but the destroyer escorts of 1944 weren’t intended to fight against battleships in defence of escort aircraft carriers either (Battle of Samar, ’44).

“Sven Ortmann is a German blogger. Since begun in 2007, his blog, “Defence and Freedom,” has covered a range of military, defence policy and economic topics, with more than a million page views. His personal military background is his service in the Luftwaffe. He has guest-blogged at the Small Wars Journal Blog and other blogs on military topics.  http://defense-and-freedom.blogspot.com/“

2 thoughts on “A Look at Corvettes and Air Defense”