Every QDR season, Wayne Hughes rousts himself from his Naval Postgraduate School hideout and mounts a push for his beloved teeny-tiny combatant–the “Seafighter”.  His latest, “Sustaining American Maritime Influence,” published in the September 2013 USNI Proceedings, is his usual salesman-like effort (in which he is joined by retired Admiral John Harvey, NPS Operations Research heavy-hitter, the retired Captain Jeffrey Kline, and LT Zachary Schwartz, USN) to get small craft onto the national security agenda. 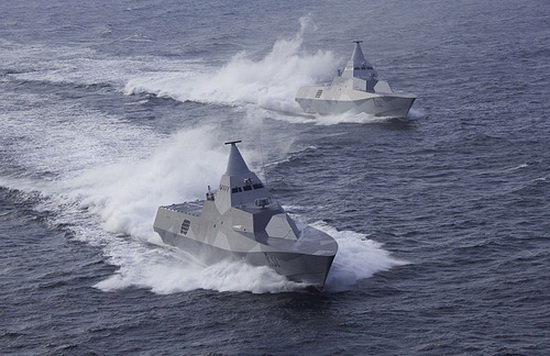 Hughes’ small ship advocacy has worked–at least to a point. Small LCS-like ships are coming into vogue, yet it is fairly obvious–after perusing his repeated calls for ever-smaller ships–that Hughes thinks LCS, in its current guise, is too big, too pricey and too sophisticated. But his subsequent proposals for ever-smaller ships really risk falling flat because his “tiny ship” argument does not work without simultaneous reinvestment/recapitalization of a much-maligned and costly ship class–the surface-ship tender. (Our gallant cadre of accountant-minded warfighters killed those poor ships off by the early 2000s)

But Hughes, in his sales pitches, doesn’t have much time for tenders. He stays firmly with the sexy and superficial to make his pro-small-ship argument. After all, the Seafighter concept is a seductive “transformational” idea, tuned to catch notice of Congress and defense reformers–small ships are cheap. They can be built in numbers. And in numbers, they offer flexibility. They are wonderful engagement tools. They are now seen as an “alternative” to LCS. Fine. And he’s correct. But there’s just one big problem.

For a forward-deployed Navy, any small-ship scheme–well, any small ship scheme that has aspirations to be more than a coast-bound, Soviet-like homeland defense force–must be logistically supportable. That’s where Hughes and his fellow small-ship boosters run into heavy weather. Once sufficient logistical support is added to any small ship scheme, the economic savings vanish, and we end up generating a host of battlefield problems that Hughes and Kline simply refuse to analyze (in one larger study–recasting the entire Navy as an almost entirely small-craft affair–discussion of the logistical implications and subsequent cost–was just, well, not included).

There’s a big, fat, fiscal reason why tenders were some of the first to be ushered out of the arsenal. The ships were pricey, the crews large and costly, and you had to guarantee a sufficient level of forward operations to make the ships worth their while.

Now, the fact that the NPS Operations crowd comes back, year after year proposing the same concept is admirable, but their refusal–or, frankly, their inability–to address the gaping logistical holes their small-ship argument does the Navy academic community a disservice.  So here’s my message to that crowd: Reorient your small ship advocacy towards explaining logistical requirements needed for small-craft forward operations.

And, mind you, this is coming from somebody who likes Wayne and loves small ships.

First, Small ships don’t operate in a vacuum, and they certainly will not operate forward or be ready for action without refueling capability, ready resupply and maintenance. Think about it. Pick up any book about PT boat operations. Consider the ample shore establishment and fleet train those ships needed back in World War II.

The second reason why we need to have a discussion is this: Nobody knows what they want in a tender. It’s fairly obvious Hughes originally didn’t want just any old cobbled-together auxiliary. Here’s what he wanted back in 2000, in the USNI Proceedings article, “21 Questions for Seafighter”:

“The smaller model [streetfighter] should be sized so that a high-speed mother ship can carry six or eight.  The upper limit is therefore around 300 tons, and the craft must be configured to launch and recover in an open sea.  The crew should be small, so crew endurance is probably going to be the limiting factor on mission time.  Habitability, sustainment and replacement crews must reside in the mother ship.  Aircraft would have to be based within the mother ship, too, thus limiting the radius of action of the small streetfighter for some tasks.

Larger versions of, say, 1,200 tons would have to transit under their own power to their operating theaters and be followed closely by a tender for support….a potential convenience is that six spare destroyer tenders already exist for their support. On the other hand, aircraft carried by the 1,200 ton streetfighters would need support by the tender or an accompanying air-capable ship.” 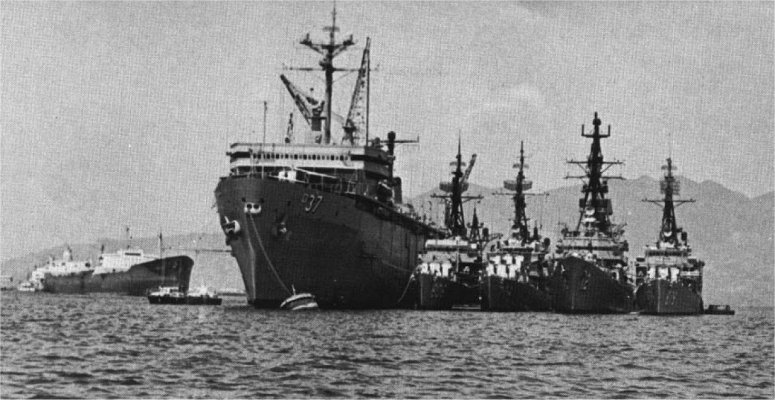 Okay.  Aside from the fact that Hughes probably knew that four of the six available destroyer tenders had been struck the year before (the Shenandoah, Cape Cod, Yellowstone and Samuel Gompers), it’s pretty clear Hughes was interested in a gold-plated auxiliary.  Look at the language–”fast” ,”air-capable”, “launch and recover in an open sea”.  Even then, Hughes knew that this LHA/T-AOE/AD/MLP hybrid was going to be far more expensive than the $500 million he suggests as a tender price-point.

But Hughes is not alone. We do not have a good model for tenders.  Frankly, I’m really vexed that we are poised to decommission some of our fast T-AOEs (yes, I know there is a sound engineering reason for that move), and I think the MLP offers all kinds of interesting options that we have yet to fully explore. Logistical ships have been overlooked for far too long, and we must do more to discuss and study them.

My third reason I wish to have wider consideration of auxiliaries is that auxiliaries are entering the fleet! We are ushering MLPs and JHSVs into service and about to design a T-AO(X) for mass production. If small ships can leverage these platforms, or if small ships demand a larger T-AO(X) block buy for support, then the National Security community needs to know now.

Unfortunately, small ship advocates are soft-pedaling their support requirements. Rather than engage in a frank discussion of floating logistical support, small-ship proponents use a fall-back strategy–an impressively simple solution called (you guessed it!) shore-basing.

In Hughes’ 2000 article, that strategy was detailed in one sentence:

“Whenever operations are near a friendly state, a small, prepackaged, transportable shore facility is an alternative.”

In Hughes’ latest act of small ship advocacy, he acknowledges the price of logistical support, but, in the end, he takes pretty much the same tack:

“When they [Seafighters] operated independently in coastal waters, then tender support was conjectured. Exploratory tender support for a large flotilla of 100 missile ships located in many places was disturbingly expensive in manpower and construction costs.

However, we believe our previously outlined worldwide survey—as well as the clearly attractive current Navy plans to base the LCS overseas in Singapore—demonstrates that in real-world circumstances we will usually be collaborating with a state where the ships can be supported ashore. Tender services might be desirable for out-of-the-way places, and so the personnel costs of two or three interim alternatives—to include auxiliary ships or amphibious-assault ships such as the USS Ponce (LPD-15)—should be included in the cost of deploying flotilla squadrons.”

The LCS deployment to Singapore was a bit of a wakeup call. We’ve forgotten that any forward-basing scheme that relies upon host-nation resources is a tough task rife with lots of opportunities for error. With Glen Defense Marine Asia, we learned that lesson–in spades. Aside from the fact that the LCS’s husbanding agent is under investigation for corruption, we are still struggling mightily with the logistical challenge of getting spares, techs and other items into another country in a timely fashion. The cost and delay stemming from customs, export control, security requirements and other issues make forward-deployment a personnel-heavy challenge. For persnickety combatants, it’s a lot easier to have a ship at the pier full of spares, techs and back-up crews dedicated to the task at hand.  (My offhand thought is to take most of the LCSron folks in San Diego and put ‘em all on a tender.)

(A tender also helps grant small ships an added measure of flexibility–I won’t even get into how geopolitics could, at a time of tension, break war plans that depend upon forward-basing schemes to work.)

Yes, other ships do manage to operate forward. There are plenty of success stories out there. But maintaining a solid old T-AO forward is one thing, while maintaining a bunch of new “yet-to-work-out-the-kinks” combatants is something else entirely.

At a minimum, a tender would have made the LCS introduction to forward-basing go far more smoothly. I mean, why have our current shore-basing options in the Gulf–the some ones we cite today as a rationale for “more” forward basing–worked so well?

Those arrangements go smoothly because, twenty years ago, the U.S. Navy brought in tenders, and used those as bases to help develop trusted relationships, a means for engaging local shore support establishment, support protocols and so forth.

With new auxiliaries coming on-line and the current “small ship” showpiece struggling to “win” a forward deployment, it would be far more useful for small ship advocates to take a new tack, and start exploring how to best enable forward operation of small craft. Stop indulging in another set of long, well-trodden discussions of small-ship capabilities, costs and other minutiae. Let’s figure out what we need to do logistically to enable small ships.

I’ll be blunt: if those small ships cannot reliably operate forward, then all the effort Hughes and his friends put into promoting small-ship Seafighter design, armament schemes and operational doctrine means nothing.

This article is cross posted with permission from Craig Hooper‘s blog, http://nextnavy.com/