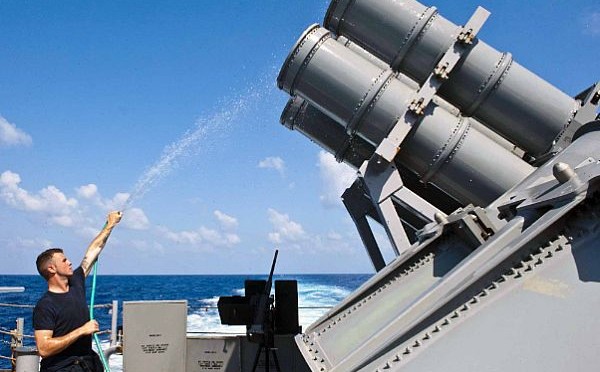 Change in the force structure of any military service is a reality we should all expect and in fact insist upon; one may only hope the factors that drive these changes are planned and controlled, but the threat gets a vote, and the end result is never exactly as desired.  The reality in the Navy’s surface force is that we have delivered an extremely capable fleet of cruisers and destroyers, all of which met the threat for the time in which they were designed, and all of which share one distinct trait today:  they all need to realize an increase in their offensive lethality if we are going to win a SAG vs SAG War At Sea scenario.

In the CRUDES world, our longest range and more capable anti-surface weapon remains the Harpoon missile; aside from a few software upgrades, the surface-launched version is largely the same weapon I saw on my first ship when I reported aboard in 1986.  The five-inch gun battery has more reliable and effective ammunition – and nearly the same range and rate of fire as its predecessor 30 years ago.  The Standard Missile, even with its anti-surface capability, is almost wholly and properly dedicated to the IAMD fight. And in perhaps our most glaring deficiency, we have not yet answered the demand signal from the COCOM in the Pacific, our most challenging maritime environment, to deliver a longer range, surface ship maritime strike weapon.

Today’s threat includes everything from pirates lobbing RPGs to the traditional blue water threat from adversary frigates, cruisers, and destroyers.  During a decade of war in and about the Arabian Gulf we focused on fast attack craft (FAC) and fast inland attack craft (FIAC) swarms designed to limit the freedom of navigation in the littorals; while we have already turned our attention to the competing blue water navies of the world, we must ensure our own ships pack the punch necessary to defeat that modernized adversary in the future.

Returning to our Offensive-minded Roots

The confluence among concluding the Afghanistan and Iraqi wars, rebalancing presence and control in the Asia-Pacific basin, and resizing the defense budget has culminated in a “Blue Water Renaissance” for the Surface Navy.  In many instances, the past is prologue for the challenges facing today’s (and tomorrow’s) fleet. Our leadership properly states in myriad forum, including testimony before congress, that Sea Power – specifically offensive capability and capacity – remains a critical strategic component in fulfilling rebalancing efforts and meeting international requirements. 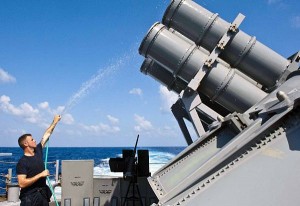 To this extent, the Surface Force is positioned to serve as an enabling characteristic in virtually every scenario, yet we must become more lethal and more offensively postured – and deliver increased capacity and capability sooner rather than later.  No ship was ever designed with the thought that it would meet and defeat every threat in every scenario; I would submit that notion would be both fiscally and realistically impossible. There are several areas, however, in which the surface warfare community is engaged to increase its lethality, and to do so without having to rely on the presence of the CVN and its air wing; as clearly capable as the Carrier is, against the prolific threat today and tomorrow, the prudent warrior will plan on having to start and finish a maritime engagement without the CVN.

Increased lethality in our ships brings the idea of “sea control” back into the realm of our surface action groups – allowing flexibility in our operational plans and forcing  potential aggressors to pause, even when the CVN is days away. In light of the defense budget’s multiple competing requirements, programming the future Surface Force to maintain Blue Water primacy and offensive capability remains our most pressing challenge, but it is a challenge we are addressing on multiple fronts. As is fitting for multi-purpose ships like DDGs and CGs, this increased lethality will come in different mission areas and allow for greater capacity across the spectrum of operations.

Over the next five years we will complete the fielding of the automated 25mm Mk38 gun system to all of our combatants and upgrade its EO/IR sensor for better threat identification and recognition.  The CIWS Block 1B upgrade continues apace, and by the end of FY15 every ship is scheduled to have this gun’s expanded defense against asymmetric threats such as small, fast surface craft, slow-flying aircraft, and unmanned aerial vehicles. In the 5″ gun lane, we are fielding a new “MOF-N” (Multi-Option Fuse, Navy) ammunition that replaces six older ammunition types and has improved performance against shore and sea targets, while continuing to evaluate the performance of MFF (Multi-Function Fuse) versus FAC/FIAC threats.

But those are all already-existing, albeit significant investments – as part of the focus on increasing lethality, N96 is also investing in new industry initiatives to increase the capability of today’s 5″ gun – improving our surface fleet’s ability to provide precision, high rate fires at extended ranges. Increased lethality also extends beyond the CRUDES community – by the end of FY15, we will complete installation of the laser-guided Griffin missiles in the PC class, which recently completed a perfect 4-for-4 demonstration in theater, and we will soon follow with a new missile system in the LCS which will significantly improve our small vessel engagement capability for the fleet.

Although the STANDARD Missile-2 (SM-2) remains our primary anti-air warfare missile system on all US Navy destroyers and cruisers, and is deployed by eight international Navies, the surface community is sustaining our inventory and pacing the threat by exploring cost effective ways to leverage the existing inventory by integrating an active seeker/guidance section into the SM-2.  As we continue to investigate this path, we are encouraged by the notion we could provide the Warfighter with a more robust and cost effective area defense weapon.  An active seeker could enable OTH engagements and improve SM-2 performance against stream raids and in ECM environments, while also enhancing our ASuW surface targeting.

Longer term investments in directed energy – both in weaponized lasers and the electro-magnetic railgun – are expected to bring an offensive punch to several mission areas while also significantly reducing the cost curve of a surface engagement. Railgun will provide greatly enhanced range and accuracy against anticipated ASuW target sets in the Pacific Rim and Southwest Asia. Industry is already deep into prototype development of shipboard lasers – high energy, solid state weapons that will provide sustained counter UAV, counter boat swarm and greatly enhanced combat ID.  Both of these efforts continue at a pace commensurate with the developing technology; if you’re a SWO finishing your Department Head ride now, you can expect to see them reach culmination and being fielded at sea before your command tour.

Ever since the demise of the Tomahawk Anti-Ship Missile (TASM), Navy has wrestled with the question of whether, and when, such a capability would again be necessary. What circumstances would dictate that our ships need to engage an enemy SAG at ranges greater than our current Harpoon missile?

Not a simple question, but perhaps there is a simple answer: our ships need to be able to engage that enemy SAG at ranges greater than they can engage us. Sea control really isn’t more complicated than that – possessing more lethality than the threat does, and being able to execute that lethality in a given scenario. Refer back to the earlier statement – we will not always operate with the CSG and its striking force in the Air Wing – and we owe it to our nation and our Sailors to be able to win that fight when it presents itself.

The Navy’s roadmap to fielding a surface launched maritime strike weapon (OASuW) includes competing a future solution that would follow the first increment of OASuW, the LRASM missile, which is an aviation-only weapon. In the interim, the surface community has invested significantly in the existing Tomahawk Block IV weapon system, including the All Up Round (AUR), to not only establish a recertification line and enable the weapon’s remaining fifteen-year service life, but also make the AUR relevant into and beyond the coming decade. The capabilities being built into the current Blk IV – including upgraded communications and electronics, with potential future inclusion of an advanced warhead and seeker – will bear some close similarity to those needed for the surface launched OASuW weapon. The Tomahawk missile, amongst others, will be well positioned to compete for that program.

Finally, since possessing this weapon will serve no purpose unless our ships can actually employ it with the confidence we should demand, we cannot forget the kill chain in the course of increasing lethality. Having myriad methods that rely on consistent communications or the presence of the air wing are not sufficient – we must develop an organic kill chain that enables a SAG to find/fix/target the enemy at ranges commensurate with the weapon system being employed. This is not an easy challenge to overcome, and its discussion is best reserved for another forum; suffice to say that solving this challenge is a primary focus in the surface community.

Amidst all the intent and desire to increase lethality, and thereby enable sea control, we cannot ignore the fiscal reality that our nation and our military face. Sea Control is defined by offensive lethality; so how does a force with a declining resource base continue to meet the demands of forward presence and persistent readiness, and also not only maintain but increase its lethality?

The short answer is by making some difficult choices, and then maintaining the course to see initiatives survive from original design to actual fielding. No branch of our military, including the Navy and its surface community, can make that happen on its own. The first step, however, can be achieved thru the innovative application of developing technology as it enters the acquisition system. Toward that end, we partner with the many military industries to develop new systems, or refine existing ones, to address current and future requirements.

In this era of flat or declining defense budgets, we simply do not live in a fiscally unconstrained environment. New initiatives need to address capability gaps, and they need to be affordable.

Message to Industry: What would be more helpful than a $500M program designed to counter a $50K threat? A program that builds upon already existing technology, doesn’t require hundreds of millions of dollars of R&D, and can be fielded in an affordable and efficient manner.

Like most of the fleet, when I reported to the N96 staff I had never served in OPNAV in any capacity, much less in the role of a resource sponsor. I had little to no appreciation for the opportunities that would present to make a difference in the future of our surface navy. While I recognize that gratification in one’s efforts in the world of resourcing is measured in 5-year budget cycles, I am indeed gratified to know that the community’s focus and investment is in the right place. If we manage to make the minor course corrections described herein, instead of shifting our rudder 30 degrees right to left, we will most certainly realize the increased lethality we need in that future SAG vs SAG scenario.