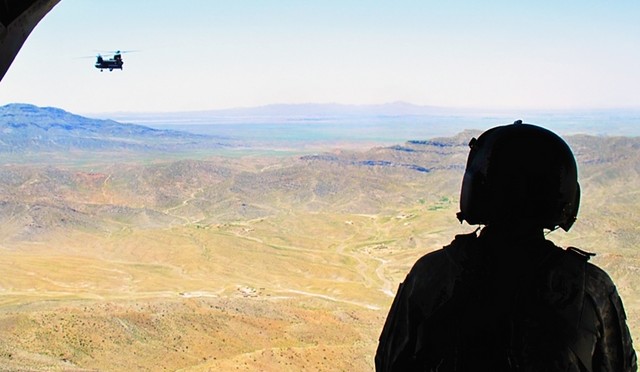 This essay by Nick Prime is part of the Personal Theories of Power series, a joint Bridge–CIMSEC project which asked a group of national security professionals to provide their theory of power and its application. We hope this launches a long and insightful debate that may one day shape policy.

This theory of control, whereby the aim of war is some measure of control over the enemy, and the achievement of this degree of control is the purpose of strategy, was most cogently expressed by Admiral J.C. Wylie. Its origins however date back to the early 1950s. When Wylie, along with Admiral Henry Eccles and German-American historian Dr. Herbert Rosinski, developed a general theory of strategy around this central concept of ‘control’. While each of the three men’s conceptions of this theory reflected variances in nuance and expression. All three sought to understand the interplay between politics, power, and control. The focus herein will be on the value of this theory as a means to understand strategy as something which exists and is practiced both in the physical and cognitive domains.

A half century ago Wylie remarked that the study of strategy lacked a clear and consistent vocabulary, a statement that is as true today as it was then.[ii] In addition to the many definitions of strategy itself, there are as yet no established definitions for the terms and concepts which serve as the foundational elements for our understanding of strategy. It is important then to provide, in brief, a working conception of these terms so that their interplay can be shown in each domain.

Perhaps the most simple and practical definition of politics is that provided by Harold Lasswell who defined it as “the way people decide who gets what, when, where, how, and why”.[iii] Here we see the first unstated but unmistakable emphasis on choice as critical to understanding the concept. Another unstated but clear emphasis is on the role of authority, a crucial element in the practice of politics. As Lawrence Freedman has noted there is a critical interplay between power and authority, with a great deal of debate being had as to whether the two concepts are exclusive or extensions of each other.[iv] Freedman’s discussion of power in a strategic sense (what he dubs ‘strategic power’) also emphasizes a duality between physical and cognitive. Though he makes clear distinctions between the physical expression as force (or the capability to use force) and the cognitive expression, what he sees as its perception in the mind of the ‘target’ or ‘beholder’. While his focus on strategic power is largely on ‘coercive capacity’ the important term there is capacity.

Wylie saw politics as “the allocation, use, transfer of power” a conception which echoes both the interplay between power and authority, while also reflecting an emphasis on capacity.[v] Power then could perhaps best be thought of as energy, capable of existing in various forms such as watts of electrical charge or calories of food. Politics then is the means by which the power of a group, institution, or nation state is marshalled, allotted, and/or directed. Strategy then should be viewed as the mechanism by which the capacity (power) created through politics, is applied towards the aim of a given policy. The assertion of authority or more appropriately, control. Herein lies the subtle but distinct difference between Freedman’s conception of strategy and that of Wylie, Eccles and Rosinski. Freedman defines strategy as “the art of creating power to obtain maximum political objectives using available military means.”

Rosinski, whose understanding of strategy resembles that previously quoted by Wylie, defined strategy as the comprehensive direction of (military) power, applied through tactics, for the purpose of control.[vi] The difference between Freedman’s theory and the control theory is subtle but significant. By placing the emphasis on strategy’s purpose as being (some measure of) control, they are focusing on the application of power, in contrast to Freedman’s focus on the creation of power.

In developing their theories of strategy both Wylie and Rosinski placed the bulk of their emphasis on control in the physical domain or ‘field of action’. As the intention was to establish control as a general theory of strategy, it was critical that theory bear equal relevance to each of the commonly identified ‘domains’ of conflict (land, sea, and air). In each of the respective domains the relevance and contribution towards control was measured when contrasted against destruction. The importance of this distinction is simple but significant. Destruction serves strategy only insofar as it contributes towards the achievement of control.

Implied in this emphasis on control, as opposed to an emphasis on destruction, is the focus on economy of force. By limiting the destruction and focusing it towards asserting a ‘selected degree’ of control over ‘key centers of gravity’ and/or ‘lines of communication’, control seeks to solve the challenge posed by strategy in the most economical means possible.[vii] Many theories of strategy lack this critical balancing. Favouring an emphasis on destruction, which can and often does become counterproductive. Strategies premised first on destruction emphasize as the primary means the use of (or through coercion, the threat to use) force. These strategies fail to account for the myriad of other means through which some measure of control, or contributions toward it, can be achieved. Such as political or economic pressures which can contribute towards control, adding to coercion, while curbing destruction only to that which is necessary. As Lukas Milevski noted, “control and coercion run along a single set of tracks: only the living can be threatened and consequently controlled, but they can only be so if, due to the expected cost or due to fear, the choice of continuing is less palatable than that of accommodating.”[viii]

Wylie and Eccles also provide valuable and insightful observations on the cognitive aspects of control. For Wylie, the manipulation of the physical centers of gravity would, through its effect on the “equilibrium” of the conflict, effect the “critical decisions” of the adversary.[ix] According to Rosinski, strategy became a means of control by taking “into account the multitude of possible enemy counteractions.”[x] Eccles, in expanding on the point made by Rosinski, stressed the importance of a clear understanding of both the strategist’s own objectives and those of his adversary. He viewed this as crucial to the holistic formation of sound strategic action. Understanding that objectives (both the strategist’s own, and those of his adversary) were a critical expression of both the actions and choices, which one had to control through strategy.[xi]

This emphasis on choice is critical, as Wylie noted, with respect to deterrence-based strategies predicated on the threat to use force. As the coercive effect of this threat to use force is itself a degree of control.[xii] The ability to control by dictating, limiting, or removing the choices of the opponent, is then implicit in the cognitive side of the control theory.

There is a great deal of value to be derived from understanding this control theory of strategy. This understanding of the control theory allows the strategist to perceive, under the same conceptual framework. Both those physical strategies which utilize and rely on the direct application of force and destruction, to achieve the desired political ends. As well as those strategies of coercion and deterrence, reliant upon other measures to achieve that selected degree of control required for the desired ends of policy. Violence is inherent in the nature of war, but not in the nature of strategy (broadly defined), and certainly not in the nature of conflict.

The character of contemporary conflicts whether diplomatic or political, as illustrated by recent events in both the South China Sea and the Ukraine, has shown that power can be created and the aims of policy can be achieved through more than the simple application of force. In this regard a framework that applies the same understanding of strategy to achieve a policy through brinkmanship, economic coercion, or the use of military force, is of significant utility.