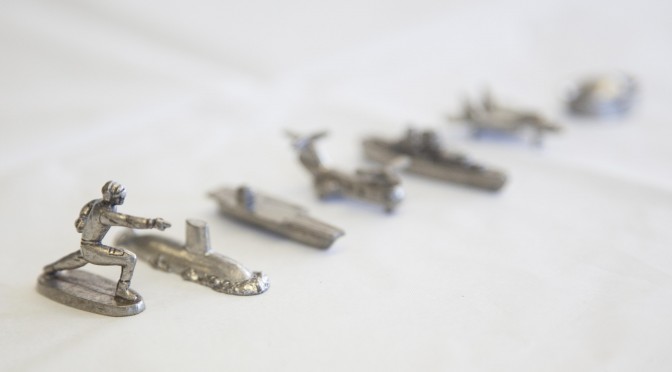 102. “In the transition from the era of sail to an era of war in three dimensions, great importance, and often inordinate value, has been attached to material developments. Material represents means and not the end. A nineteenth century sailor would be bewildered in a modern warship, but regardless of the appearance of ships, there is one element, the most important of all, that remains unchanged – the man himself. Human nature in all the changing years has altered but little. It is the human element in warfare which may, if understood by the commander, prove to be the only way of converting impossibility into a successful reality. With trained men and proper materials, the commander’s task is reduced to the preparation of good plans. A force inferior in material potency may, due to the moral resources of its men, prove superior in naval strength.”
FTP 143(A), War Instructions, 1944

In the recent years of Pax Americana, we have gotten accustomed to the technological superiority of the United States. However, wars are not fought by gadgets, platforms and systems, they are fought by people. The people of the United States have developed this country and built its success not on a foundation of simply inventing new technology, but on innovative and disruptive ways to use it. The carrier and the submarine were not game-changing in their technology alone, but in how they were employed in a systematic campaign of strategic constriction through striking from great distance, island-hopping to secure bases and commerce destruction resulting in decisive victory. RADAR was a technology employed by a number of nations in World War Two, but the British early-warning system employed it through a novel concept of coordinated interception to successfully defend their island. In this same tradition, Fleet Battle School enables players to experiment with various “generations” of technological capability, indicative of what is available today and in the near future to discover not just what technological capabilities are valuable in a given situation, but how it can be used in new ways to be particularly devastating.

To this end, the CNO’s Rapid Innovation Cell (CRIC) developed a wargame which could be used to experiment with new technologies and innovative tactics. The Fleet Battle School game was intended to be a wargame which would enable the crowd-sourcing of ideas, an idea which project lead Jason Chuma has previously discussed on the CIMSEC website. To reach this end, the team focused on creating a game (based on a design by Paul Vebber) which would abstract a number of the characteristics used in professional wargames to create a system which is both easy to use and would portray general relationships present in a real conflict.

Most professional naval wargames are designed with a high level of fidelity. This fidelity within the “black box” of computer simulation hides the intricate interaction between weapons and targets. While this eases the burden of a steep “learning curve” to play the game and helps staffs exercise the detailed planning required to conduct complex naval operations, the lack of transparency results in little insight into why and how the result of executing the plan emerges. Fleet Battle School is not intended to be one of these games. It is a game designed to focus on the decisions which a commander would make to employ forces and allow players to experiment with how different decisions affect the outcomes of battle in a transparent manner. Thus, while Fleet Battle School has a combat system which is based on general relationships gleaned from naval warfare studies, engagements are resolved through a series of dice rolls based on incremental ‘capability levels’ attributed to the various platforms probability of successful engagement within and between domains represented in the game. Having access to the “combat results table” that indicates general probability of success of interactions between the various “capability levels”, the commander has knowledge of the general risk he accepts by pursuing a given course of action.

1277. “While no one can predict with certainty in advance the manner in which an action will be fought, particularly on the part of the enemy, it is imperative, if coordinated action is to take place and if effective results are to be obtained, that the officer in command indicate his intentions and direct the units of his command. He endeavors to impose his plan upon the enemy. He has a definite intention to win by employing a definite method. Indecision on the part of the officer in command creates indecision and inaction in his command and invites disaster. An action begun with the declared intention to bring about an attainable result in a specified way gains the initiative.”

Rather than making decisions for individual platforms, the players think at the level of the operational commander and issues orders to his forces as “missions” to perform in a given location, with caveats in the form of “commander’s intent.” These orders are given for each “game day” with the players given opportunities to adapt “the Plan” to emergent events, but at the cost of adding “friction” to the force’s ability to execute ad hoc missions which they are less prepared for than those in “the Plan”. It is assumed that the commanding officers of ships and pilots of the aircraft will execute tactics to try to best accomplish the mission assigned, though this can be affected by assumptions about overall crew proficiency and the aforementioned “friction”. The player isn’t worried about whether the ship should change speed or course, or how aircraft should be maneuvered to avoid an incoming missile – the split second decisions there are better suited for simulations. The player focuses instead on how forces are employed at the operational level, using emissions control, firing doctrine, force maneuver and air power to defeat an adversary, and most importantly, identifying the need to make a decision and what the best choice to make is at that juncture.

This approach creates three effects which make Fleet Battle School a unique wargame. First, it takes much less time to execute a scenario than a professional wargame. When professional wargames take days to play a week or so of real time, a scenario in Fleet Battle School representing several days can be resolved in a few hours or a game representing a few weeks in a few days. (The CRIC had entertained the idea of building a computer version of the game, which would shorten the time for a game to about 10-30 min per game day, depending on scenario complexity.) This makes the game much more accessible to a wide audience, by requiring less of a time investment in playing through a scenario to completion. It also supports a number of swift experiments sequentially – for experiments run over a week, players can try a variety of different decisions to better understand in what circumstances the decision is appropriate, or in the event of an unlucky outcome, how the same decision may still be the best approach.

Second, the game is very accessible to those with a wide background. Fleet Battle School was aimed at enabling junior officers and armchair admirals at home to be able to explore decisions at the operation level of war, but good operational warfare is a skill which takes a professional staff years to learn. By focusing on the decisions of the commander rather than the details of the planning, the game is accessible to people who may not have experience in maritime warfare or naval aviation, and gives them the opportunity to think through the challenges associated with naval warfare. In playtesting, one of the best players was a Marine Corps captain, who used a number of creative strategies to continue to defeat opponents with naval backgrounds.

Third, the approach keeps the game unclassified. While detailed simulation has its place, the difference of a few miles of missile range, or a different flight profile, doesn’t necessarily change decisions about how to employ forces. Basing the combat results on general incremental relationships between “generations” of capability based on unclassified studies of naval combat and operations research provide the game a backbone that keeps the effects of capabilities on decision-making consistent , without requiring details that would excessively limit the intended audience of the game.

In addition to these objectives, it was critical that the CRIC also produce a game which emphasized multiplayer interaction. Frequently, naval officers and operators are not exposed to conflict with an agile and adaptive adversary until late in their career; until then they are expected to follow and execute doctrine. Wargaming can provide a valuable opportunity for officers to develop their ability to think tactically and understand how to think through the sequence of action and counter-action to defeat a clever, creative and adaptable enemy. The ability to think like a naval warrior requires cultivation, and Fleet Battle School provides one way to allow players to do that.

Finally, if you want a wide audience to play your game, you need to make people want to play your game. Fleet Battle School aims at providing a game which flows quickly enough to keep players involved, and gives them enough decision space that they can build a narrative associated with the conflict. In the future, the game is designed to support a campaign of scenarios which would allow players to build their own order of battles and identify new technology investments. By watching how players evolve their own fleets, players develop ownership of their own fleet and are committed to its success, but the game would also provides valuable lessons on which capability and platform mixes are most successful.

New technological advancement themselves do not necessarily change the face of warfare; it is how those advancements are incorporated into new or novel concepts of operation which deliver advantage to a military. Fleet Battle School was designed by the CRIC to be a way to explore and evaluate new concepts across a wide forum to understand how the United States Navy and military forces in general can best leverage emerging technologies or new ideas. At the same time, it also helps to educate a new generation of officers in warfighting, and allow them to build experience in thinking creatively about warfare against an adaptive foe.