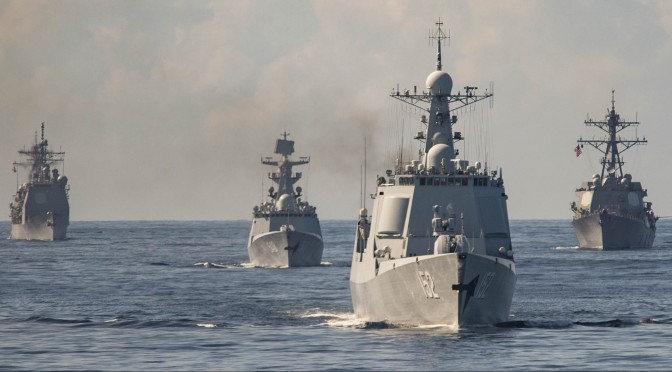 Distributed lethality is about “increasing individual warship lethality and then combining surface warships in innovative ways.” We can add some 21st Century flair to the details, but the premise remains the essence of warships since time immemorial: go to sea and kill your enemy. Frankly, the U.S. Navy’s (USN’s) surface fleet is playing catch-up after the post-Cold War/ low-naval-threats era of the 1990s and 2000s. The fact that we needed to verify the value of capable warships with “a rigorous program of analytics” and numerous war games seems a poignant expression of the tactical and bureaucratic disconnect in the past decades. So for now, check out China and the People’s Liberation Army (Navy) (PLA(N)) if you want an example of Distributed Lethality in action.

The PLA(N) began building modern warships in the 1990s when they laid the keels for their first Luhu, Luhai, and Jiangwei-class vessels. Those vessels and every class of surface combatant since have counted anti-ship cruise missiles (ASCMs) as their primary armament. Which is to say they were each deadly in the anti-surface warfare (ASuW) arena from day one. Ironically, as China was ramping up production of lethal surface combatants, the U.S. was ramping down. The last Arleigh Burke to incorporate the RGM-84 HARPOON (USS Porter, DDG 78) slid off the blocks in 1997 and every U.S. destroyer built since has been oriented around air defense. What little ASuW capability these later destroyers have is reliant on firing an SM-2 missile designed for air warfare in a secondary ASuW mode.

Fast forward to 2015, and you have two comparisons of the USN and PLA(N)- first by tonnage, then by strike-mile lethality.

As you can see, the USN may have the edge in tonnage but the PLA(N) takes the prize for lethality. It turns out the PLA(N) also has more hulls- which means their tonnage and armament are more, wait for it, distributed.  Granted, a lot of that distribution resides in their Houbei PTGs. But if you’re focused on regional sea control, say like the South China Sea and Western Pacific, then those low-cost/high-lethality combatants are the perfect thing to disperse across contested locations, key transit areas, and chokepoints.

Today’s bottom line is that the PLA(N) can field more ASCMs and a wider variety of platforms than the USN. For most of the PLA(N), that lethality comes in the form of a warship with at least four YJ-83s, each delivering a 419-lbs warhead up to 100NM (some vessels have ASCMs with even longer ranges, like the YJ-18 and YJ-62). This means combatants with YJ-83s can hold a 200NM-diameter circle (or 31,400NM2) at risk of lethal effects. The Spratly Islands for example claim 120,000NM2; strategic distribution of a four-ship PLA(N) surface action group (SAG) gives ASCM coverage to 125,600NM2.  Raising the hull count or employing multiple SAGs makes the situation all the more frightening. Cue these vessels with rough targeting data (a.k.a. maritime domain awareness) from a Fiery Cross-based patrol aircraft and the PLA(N) has a full-blown system of distributed lethality.

Holding short of a war at sea, PLA(N) combatants are the muscle behind China’s maritime presence and influence operations. PLA General Zhang Zhaozhong implied this in early 2013, calling it a “cabbage strategy” to surround contested maritime claims (like Second Thomas Shoal) with layers of civilian, government, and military vessels. Then in 2014, PLA(N) vessels helped escort the Haiyang Shiyou 981 drilling rig in 2014 despite Chinese statements to the contrary. Talk about “combining surface warships in innovative ways,” China is using them as part of a layered politico-military offense to advance their maritime claims, one that easily transitions to combat operations if things deteriorate.

Implementing distributed lethality requires sound doctrine and a practiced C2 structure. That’s where the USN carries the advantage (for now) while we implement expedients like the modified TLAM and SM-6. However, much of our doctrine is either available via open source research or may have been compromised by cyber warfare. For example, the majority of our own textbook on “Surface Tactics 101” is available via a quick Google search for MTP-1D (the Multinational Maritime Tactical Signal and Maneuvering Book). Paired with the equally available NWP 3-56 Composite Warfare Doctrine, and five minutes of Google research has provided the fundamentals of distributed tactics.

Whether the PLA(N) has incorporated U.S. C2 doctrine or developed a native system is likely hidden in classified reporting. However, we can look at broader open source examples to evaluate how practiced they are at operating warships together. For instance, rehearsals of combat resupply demonstrate coordination amongst combatants and the entire logistics train. Recent exercises with Russia, Australia, and the U.S.  illustrate that the PLA(N) has become a capable partner for live fire exercises, amphibious landings, and maneuvering drills amongst other evolutions. I was once told that the key to combat at sea is showing up to the right location, on time, with weapons and radios that work (which may have been borrowed from someone else). I believe that is a valid definition, particularly in the context of distributed lethality, and one that the PLA(N) appears to be meeting.

If one is inclined to dismiss exercises and drills as liable to heavy scripting, then the PLA(N)’s blue water deployments show their C2 abilities are no fluke. These complicated operations (and the C2 required for them) are one snapshot in an evolution of PLA(N) doctrine that runs concurrent with their progress in warship technology. Even the larger Chinese defense organization is adapting to facilitate coordinated operations. Two of the five newly inaugurated theater commands will likely be tasked with maritime-centric missions in the East and South China Seas. More important than today’s snapshot, these trends indicate where China wants to take their C2 ability tomorrow. So what do these strategic moves mean for distributed ltactics? If China has the C2 infrastructure, logistics support, and trust in its commanders to operate independently around the world then it stands to reason they can operate together in China’s near abroad.

Which brings up my last point on distributed lethality in the PLA(N): they win by implementing it locally. Warships from China’s East Sea Fleet at Ningbo need to cover 400NM to be in the disputed Senkaku Islands, while South Sea Fleet ships from Zhanjiang are 700NM from the Spratly Islands. PLA(N) vessels can cycle through combat patrols, maintenance periods, training evolutions, and resupply hops in 1/3 the distance a U.S. destroyer covers transiting from San Diego to Hawaii. Meanwhile, the USN still needs the missiles, variety of hulls (small, medium, and large combatants), and regional partners to make distributed lethality work in the Asia Pacific. China need only cast off lines.

Tactics come down to your ability to shoot, move, and communicate. Most of the USN surface fleet can move and communicate around the world, but can’t authoritatively prosecute a surface engagement. The PLA(N) is working on the skills to communicate in a coordinated attack, but they can move with ease in their near seas and they designed their surface combatants as shooters from the beginning. Both sides have identified where they are and where they want to go as far as tactical capability (which, for good or ill, seems to be similar places). So which challenge is easier- learning C2, or refitting and retraining a fleet? I guess the race is on.

Alan Cummings commissioned from Jacksonville University in 2007 and served as a Surface Warfare Officer in the USN until 2013. The opinions here are his own and do not represent the position of the U.S. government. Some material used here is drawn from research being considered for publication elsewhere. Original data is available via valid requests submitted to nextwar@cimsec.org.