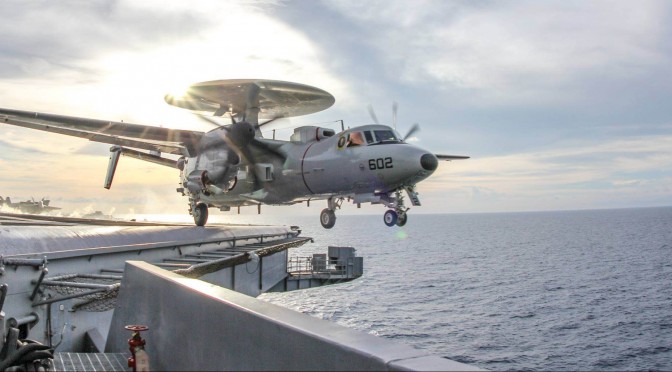 Admirals Rowden, Gumataotao, and Fanta introduced the concept of distributed lethality over a year ago as a “means  to increase the offensive might of the surface force and employ ships in dispersed formations known as ‘hunter killer surface action groups.’”[i] The basic concept as outlined in the original article and further discussion has evolved into “the condition gained by increasing the offensive power and defensive hardening of individual warships and then employing them not only in traditional roles but also in different ways than have been the practice in the past few decades” according to Ryan Kelly.[ii] Discussion and interest grew around the country over the past year and with the formation of the Distributed Lethality Task Force. Many great minds have come together, primarily from the surface navy, to offer ideas and solutions. Furthermore, three key initiatives describe what needs to be harnessed within Distributed Lethality: To Deceive, Target, and Destroy.

Nothing we do in Distributed Lethality should be seen as taking away from our historic and necessary role in enabling naval power projection and helping protect CVN’s and ARG’s. We start from the proposition that HVU operations and defense is our main mission, and then work to create operational problems with more lethal and distributed surface forces from there. Our proposition is that the Surface Force can do more, and we are going to take the necessary time to study and analyze that proposition in order to get it right.[iii]

The perceived assumption is that the surface navy is either supporting power projection by providing “HVU operations and defense” or operating independently from the air wing with more “lethal and distributed surface forces.”

Dmitry Filipoff proposes a third option of a dispersed surface force that is supported by air wing assets:

While distributed lethality deemphasizes carrier strike missions, the air wing will be a critical enabler for the distributed force. A distributed air wing can provide rapid response anti-submarine warfare capability and function as communications relays for maintaining a responsive decision cycle while the dispersed force operates under EMCON. The air wing’s screening and early warning functions will be indispensable for enabling commanders on the scene to exercise initiative and engage on their own terms.[iv]

In this article we build upon the ideas of Mr. Filipoff, specifically focusing on the unique capabilities of the E-2D Advanced Hawkeye. Before proceeding further it might be helpful to offer some background information on the Hawkeye Community and its relevant areas of warfighting focus.

The Hawkeye was developed primarily as a blue water airborne early warning platform capable of long range detection of both aircraft and ships. While detection is the primary organic capability, Hawkeye aircrew are well versed executing real time command and control over a wide range of mission sets, including anti-surface warfare (ASuW). Through application of the Composite Warfare Commander (CWC) concept, new air intercept controllers and mission commanders learn the basics of conducting  ASuW during the earliest stages of their training, which is then built upon throughout the work up cycle. At the same time, as an airborne C2 asset the Hawkeye is more than capable of bridging the gap (both literally through network relay and bridging, and figuratively through the ability to have one coordination entity) between warfare commanders.

That being said, no amount of training or warfighting culture is going to matter if processes are not in place to make use of that corporate knowledge. Enter the E-2D Advanced Hawkeye with the APY-9 radar and associated sensors and communications equipment. While specific ranges of the radar are classified, suffice to say that the APY-9 greatly increases the ability of a strike group (or individual cruiser or destroyer) to detect and classify contacts at range. Furthermore, the data link and communication suite enables the Hawkeye to connect widely dispersed forces through multiple networks and means of voice communication. The continuing development of integrated fires offers unique employment options.

Taking into account the systems as well as the aircrew operating the platform, the organic and currently fielded capabilities of the E-2D Advanced Hawkeye serving as the centralizing  C2 node, bring the persistent ISR (intelligence, surveillance, and reconnaissance), Command and Control, and strike group defense capabilities otherwise unavailable to the distributed fleet.

The overall theme of this article seeks to speak to several of the “key issues” brought up in Mr. Kelly’s call for articles, but particularly:

How should the upcoming Adaptive Force Package be employed: including Tactical Situation (TACSIT) execution, organic and inorganic targeting, fielding of modified weapons, and improved integration with Amphibious Forces and Expeditionary Marine Corps units in support of sea control operations?

First and foremost, the E-2 Hawkeye is an airborne command and control platform, capable of providing both C2 technology as well as “man-in-the-loop” decision making, necessary for effective control of a dispersed and dynamic battlespace. The E-2 is equipped with various data link capabilities which allow for the sharing of not only track data but also raw sensor information.  Additionally, the communication suite in a Hawkeye includes V/UHF, HF, and SATCOM communications with various options for secure and anti-jam capabilities. The typical stationing altitude of a Hawkeye and the power output of the communication and data link equipment allows for a large range of operation ensuring a widely dispersed fleet can stay connected without the requirement for individual ships to maintain line of sight with each other.

Furthermore, the highly trained crew of the Hawkeye is capable of assessing the situation and making decisions for various commanders – carrying out their intent across various warfighting domains. This allows for the efficient choice of targeting solutions for offensive and defensive scenarios across the battlespace.

And finally, the warfighting experience of the crew allows for tailoring of information for specific recipients, ultimately cutting down the volume of information sent.  For example, what the air defense commander needs to know is not necessarily what the surface warfare commander needs to know, or what the OTC or JFMCC need to know. The Hawkeye crew has the experience to tailor the information specifically desired by various levels of the chain of command, thereby limiting the total amount of information being transmitted.  In an environment where uncontested usage of the electromagnetic spectrum is not guaranteed, knowing exactly what information to send and only sending that information becomes paramount in reducing our own electromagnetic footprint.

One of the biggest challenges facing friendly forces in an “over-the-horizon” war is positive identification of a contact at range. With inherent line of sight limitations there is currently very little organic capability in a Carrier Strike Group to determine what exactly a particular OTH contact is. In an area of high surface and/or air traffic, the ability to identify a contact becomes a great concern for self-defense, especially in a distributed fleet. Ultimately what is needed, and can be provided by the Hawkeye, is an ability to maintain a single persistent track with consolidated ISR from multiple assets.

The airborne E-2 detects and localizes a contact, and begins to evaluate the contact using available onboard sensors. Simultaneously, the Hawkeye crew begins to work with any and all available ISR assets (EP-3, EA-18G, FA-18, UAV, surface ships) to determine any additional information to help with identification. A track with consolidated ISR information is then “pushed” to the fleet via available data links and/or voice communication as required. When the on station E-2 is forced to leave station due to the end of mission time, the relieving E-2 conducts a positive turnover of all tracks of interest ensuring no change in reported data.  (Currently, station time is limited by fuel capacity, however in-flight refueling capability is currently in development for the E-2D which will significantly increase on station time). The result is a persistent, constantly communicated, consolidated “picture” of the area of interest. This picture is capable of being received by interested parties with very little, if any, electromagnetic emission.

A dispersed and more offensive fleet creates some advantages for carrier strike group defense. For the threat, the left side of the kill chain becomes lengthened as it will be harder to find and track their intended targets. On the other hand if the threat is able to identify the high value unit they could face less resistance as the friendly layered air and missile defense will be reduced in strength. A reduced number of assets concentrated around the high value unit will inherently result in less overall defensive missiles, however technological advances and weapon system upgrades that have already reached initial operational capability, such as the SM-6 and E-2D, can reestablish a layered defense and reduce the number of assets required to defend the carrier strike group. Furthermore, these capabilities increase the defensive effectiveness of individual units spread throughout a distributed force. NIFC-CA is a tool that can be utilized for CSG defense and potentially establish a non-permissive environment for threat aircraft, but it is not the end-all solution. Cross community tactics must be developed to optimize weapons target pairing. Training and work-up cycles need to be significantly more integrated to exercise and reinforce new air and missile defense processes. The capabilities are in place (or will be soon) to defend a high value unit in a dispersed fleet; CVW aircrew and Surface Warfare Officers must remain flexible and innovative to most effectively employ the new capabilities available to them.

The E-2D Advanced Hawkeye is uniquely equipped and positioned to facilitate the deception of dispersed forces, the targeting of the adversary and ultimately, the destruction of designated targets. This assistance and support can enable the surface force to indeed perform better with a more lethal positioning of forces distributed across the battlespace. The development of distributed lethality will include identifying current gaps in training and capability that can make our force more lethal. As we as a Naval force continue to develop innovative ways to counter adversaries, we would be wise to develop cross-domain warfighting tactics and increase the interoperability of our forces.

LCDR Christopher Moran and LT Ryan Heilmann were both assigned to VAW-125, the first operational E-2D Advanced Hawkeye squadron. Their views do not necessarily represent the views of U.S. Department of Defense, the U.S. Navy, or any other agency.