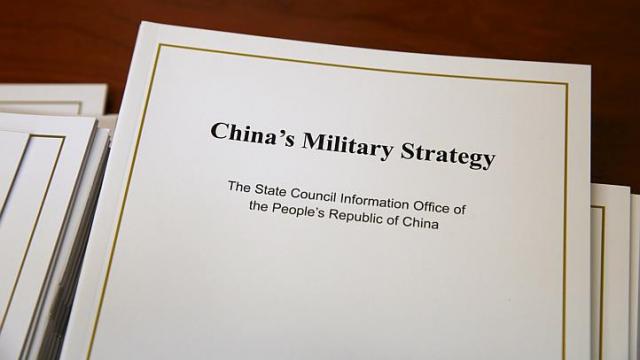 This article can be found in its original form at the National Maritime Foundation here and was republished with permission.

China has been issuing Defence White Papers biennially since 1998. The ninth White Paper of 2014 titled ‘China’s Military Strategy’ was released recently in May 2015. This essay seeks to analyse the salient aspects of the document, particularly in context of the preceding document of 2012 released in April 2013.

In comparison to the Defence White Papers published by China in the preceding years, the 2014 document is very concise. Nonetheless, it reveals substantial content and context, disproportionate to the size of its text. While much of the revelation is likely to be Beijing’s ‘strategic communications’, the document is nonetheless insightful.

The present White Paper has continued the trend of using a thematic title – a trend that was initiated with the 2012 document titled ‘The Diversified Employment of China’s Armed Forces’. The trend and the specific title spelling out “China’s Military Strategy” signify the increased self-confidence of an emerging global military power, which until a few years ago, preferred to be opaque to the world on ‘matters military’.  The document also reflects an increased self-assurance as a nation, stating that “China’s comprehensive national strength, core competitiveness and risk-resistance capacity are notably increasing, and China enjoys growing international standing and influence”.

In the document, China has maintained its earlier stance of avoiding war through its military strategy of “active defence” (that envisages an ‘offensive’ only at the operational and tactical levels). However, the document mentions “preparation for military struggle (PMS)”, which indicates its strong desire to retain the option of first use of military force, if it cannot achieve its core objectives otherwise. Furthermore, the emphasis on “maritime PMS” indicates that these objectives pertain to Taiwan’s “reunification”, and fructification of its maritime-territorial claims in the Western Pacific. Furthermore, the inclusion of the phase “You fight your way and I fight my way” indicates that China’s war-fighting concept to meet its core objectives is likely to be based on use of asymmetric capabilities.

The previous 2012 document stated the PLA Navy’s mandate to preserve China’s sovereignty over its territorial seas and its maritime rights and interests in ‘offshore areas’ against complex security threats, thereby portraying China as a victim or an underdog reacting to the actions of Japan, and implicitly, of the U.S. The new document, however, emphasises a more proactive protection of its interests in ‘open waters’, thereby enlarging its strategic depth. Notably, the document also calls upon the need to shed the mindset that peace, stability, and development of China is linked to affairs on land rather than the sea. This indicates a maritime emphasis of China’s military strategy.

With regard to the security of sea-lanes, it uses the term “strategic Sea Lines of Communication (SLOCs)”. Although the term ‘SLOC’ itself bears a ‘strategic’ connotation, the addition of the adjective indicates that China considers itself vulnerable to commodity denial during war, thereby severely limiting its option of use of military force. Although the document does not specifically mention the ‘Indian Ocean’, the reference to Indian Ocean SLOCs may be inferred. 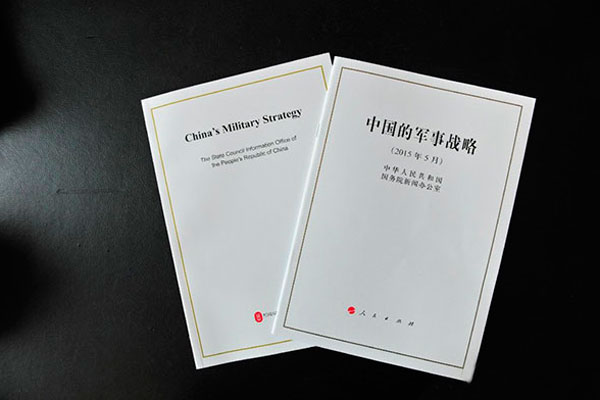 Alike the previous 2012 document, the 2014 White Paper states that the PLA Navy would maintain “regular combat readiness patrols…(and maintain)…military presence in relevant sea areas.” While the former may refer to the Western Pacific, the latter is a likely reference to the Indian Ocean. This is buttressed by the statement that the PLA Navy would “continue to carry out escort missions in the Gulf of Aden and other sea areas as required, enhance exchanges and cooperation with naval task forces of other countries, and jointly secure international SLOCs.” This implies that China’s naval presence in the Indian Ocean would continue, and may even increase. While such presence may be primarily for undertaking ‘Military Operations Other than War’ (MOOTW), it is likely to be dovetailed with preparing for ‘wartime’ operations. This assertion is borne out by Beijing’s assertion in September 2014 that its Song-class submarine deployed in the Indian Ocean was meant for counter-piracy. (The credibility of this rationale was dismissed by naval analysts on operational grounds). The document adds that the “PLA Navy will work to incorporate MOOTW capacity building into…PMS” thereby implying the China would also seek to develop fungible capabilities.

Furthermore, the White Paper lays emphasis on ‘sustenance’ of the forward-deployed naval platforms through “strategic prepositioning”. This indicates that China is likely to seek overseas access facilities (if not military bases) in the Indian Ocean, or even resort to the U.S. concept of ‘sea-basing’. The latter possibility is supported by recent news-reports about China developing large ‘Mobile Landing Platforms’ (MLP) similar to those used by the U.S. expeditionary forces.

The mention of Russia in the White Paper precedes all other countries. The “exchanges and cooperation with the Russian military within the framework of the comprehensive strategic partnership…to promote military relations in more fields and at more levels” indicates the imminence of a China-Russia quasi-alliance.

The 2012 White Paper, without naming the U.S., had expressed a concern for its “pivot” to Asia strategy and “strengthening of its military alliances with the regional countries, leading to tensions.” In contrast, the 2014 document mentions the U.S. explicitly. While it does state the need for “cooperative mechanisms with the US Navy, including exchange of information in the maritime domain”, its tone and tenor indicates a precursor to a ‘Cold War-style’ military interface between the two major powers. It talks about a “new model of military relationship” with the US based on “major-country relations”, with “strengthening of defence dialogue (and)…CBMs to include notification of major military activities (and) rules of behaviour” to prevent “air and maritime encounters…strengthen mutual trust, prevent risks and manage crises.” However, it is yet unclear what kind of bipolar interface will eventually emerge since the current global environment marked by close China-U.S. economic ties is vastly dissimilar to the erstwhile Cold War era.

The 2012 White Paper had mentioned India’s combined Army exercises with PLA and increased anti-piracy coordination with India. Since the 2014 document is more succinct, the lack of details is understandable. However, the lack of even a mention of defence exchanges with India, or any other Asian country is remarkable.

Also ‘conspicuous by absence’ are the various facets of ‘transparency’ that the preceding Defence White Papers had addressed, ranging from China’s defence budget to its nuclear weapons policy of no-first use (NFU). Evidently, China has ‘arrived’ on the world stage with a single-minded preoccupation of how it could challenge the unipolar world order dominated by the U.S.

Captain (Dr.) Gurpreet S Khurana is the Executive Director, National Maritime Foundation (NMF), New Delhi. The views expressed are his own and do not reflect the official policy or position of the NMF, the Indian Navy or the Government of India. He can be reached at gurpreet.bulbul@gmail.com