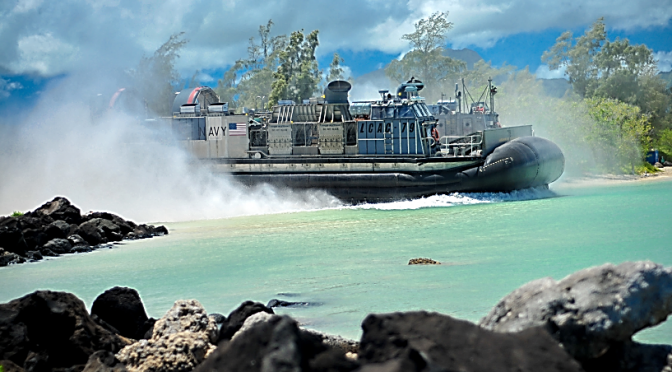 With the continuing buildup of Chinese and Russian navies, as well as increasingly capable regional actors, the task of leveraging a 300 ship US Navy using distributed lethality (DL) as a force multiplier in response remains a formidable task. It is reminiscent of another period in our history when our scientists and engineers had to conjure a way to prolong a life sustaining air supply while constrained to only limited resources available to a stricken space craft. Most of us are familiar with the story of Apollo 13 astronauts using duct tape and plastic bags to adapt parts never intended to work together in order to return safely back to earth. Those scientists and engineers toiled feverishly with various configurations before agreeing on a workable course of action. The birth of distributed lethality is similarly constrained, but with a much larger mission and far-reaching consequences.

BRAVO ZULU to the tacticians and engineers who adapted the SM-6 surface-to-air missile (SAM) to a surface-to-surface missile (SSM) to rapidly extend the stand-off range for our surface action groups (SAG).  It is encouraging that these innovators were not dissuaded from their pursuit by the arguments against using an air warhead against a surface target or the $4M cost per unit or the command and control implications of shooting at a target so many miles over the horizon potentially dispersed among friendly vessels. This is an innovative first step to demonstrate the capability.  The necessary refinements will follow as the value of this new weapon becomes accepted and integrated into battle group tactics.

Let’s examine the advantages of the SM-6 in the SSM mode and why this adaptation is a smart and innovative use of existing ships and munitions. The missile dimensions are the same as the SM-6 in the SAM mode which allows the use of existing launchers and platforms. Crews are in place. As mentioned previously, the stand-off range is substantially improved. The kill probably of a continuous rod or fragmentation warhead against hardened ship targets is unlikely; however, a soft kill of the target’s sensors and communications antennae, at least initially, is almost as good as sinking it. It will likely blind the enemy’s fire control systems. The allocation of missiles in the ship’s missile magazines for SSM versus SAM targets is an old discussion and is only appropriate when discussed relative to the expected opposing force. Another potential negative is the $4M cost of these missiles. But nonetheless, this is a step in the right direction and is in alignment with distributed lethality.

Where else can the US Navy apply this type of innovative thinking to further increase lethality? How do we out gun, out run, and out maneuver opposing forces using the current inventory of platforms, weapons systems, C2, and manning? Why not reconfigure the 1st generation Landing Craft Air Cushioned (LCAC) into shooting platforms? The VLS Hellfire missiles can be mounted in the cargo deck. Pedestal-mounted APKWS missiles could be similarly mounted. Chain guns such as the M61 Vulcan 20mm Cannon or the Mk38 25mm machinegun can all be mounted in the cargo deck for line-of-sight targeting. This craft has demonstrated 100 knots speeds.  Its ability to maneuver in shallow water, reef zones, shifting sand bars, riverine, and beach zones gives it the maneuverability of no other afloat vehicle. This tactical advantage of speed and maneuver cannot be matched. It travels at near-helicopter speeds, can carry 10 times the helicopter’s payload, with four times the on-station time. It could be configured with an AEGIS Ashore Missile Payload and positioned at many improved and unimproved sites.

Initially, targeting can be line-of-sight with over-the-horizon targeting when DL integration development progresses. We have seen enemy fighters using mosques and urban

areas to shield them from incoming fire. We can expect enemy maritime forces to use fishing, merchant vessels, and fleeing refugees as defensive shields. Engagement criteria, for at least the initial engagement skirmishes, will be line of sight positive identification via manned observation or remote observation. Clear Rules of Engagement (ROE) will need to be developed and practiced. Greater forward force autonomy should be anticipated to ensure engagement success.

The air cushioned vehicles will be positioned forward of the battle group in picket roles in archipelagic regions or in strategic straits such as the Strait of Hormuz where the shifting sandbars are not an obstacle to maneuvering for these vehicles. Their maneuverability will allow them to cut the escape routes of marauding high speed conventional craft who traverse narrow channels with impunity because they know the potential of grounding a chasing naval vessel is an unacceptable risk to the USN.  Submarine based threats and mined areas are also of limited concern for a vessel that has no draft.

But these air cushioned vehicles are not suitable to plow through high seas. How can we get them to theater and provide operating support?  Platform Supply Vessels (PSV) have been performing this type of role in the off-shore oil industry for three decades. They have transported the heavy equipment and operating supplies that allow oil rigs to operate at sea for long periods. These vessels are designed to carry a tremendous volume of drill mud, fresh water, and fuel needed for use in off-shore oil drilling. The drill mud storage tanks can be used to ballast down the stern and allow self-propelled access to air cushioned vehicles. They are rugged vessels and are built to withstand the rigors of high seas.  In the

post-Deepwater Horizon off-shore oil industry, they have reduced the high insurance costs of hoteling crews on the rigs by providing hotel services on the PSVs. As a consequence of the shale oil revolution and low world oil prices, new PSVs are tied to their piers because operating them is no longer profitable. They are available for lease, purchase, or contracted services.

As the new LCAC 100 comes into service, the old LCACs are headed to the scrap pile.  Why not reconfigure them with modular weapons to give the US Navy a combatant craft that can out gun, out run, and out maneuver opposing forces?

John Devlin is Director of Navy Programs with ISPA Technology and a retired US Navy Captain.  He was a Tactical Action Officer (TAO) in carrier battle groups as a Surface Warfare Officer and has experience in littoral operations as a Special Operations Officer.