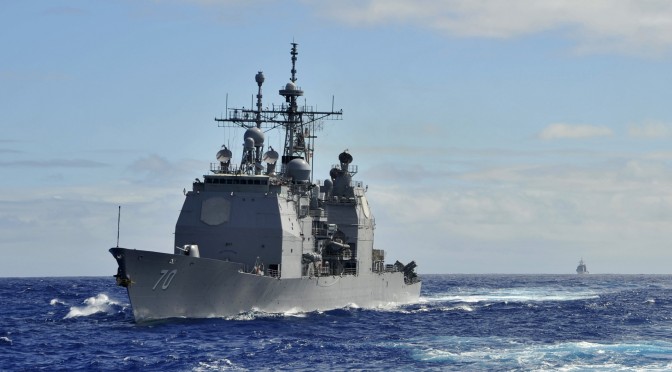 Distributed lethality offers an innovative way ahead for the US Navy’s surface forces by returning them to a sea control role, detached from HVT defense and grouped into hunter-killer SAGs designed to complicate adversary targeting efforts, deter adventurism, and reassure allies and partners. This has been couched in terms of an “operating concept” and not a strategy, per se, but its implementation will certainly produce strategic effects.  Distributed lethality amounts to a form of strengthened dispersal, designed as a direct counter to anti-access/area denial (A2/AD) strategies [1] while increasing the deterrence value of USN forces. The US Navy has already made strong efforts to find “least-cost” paths toward achieving the desired increases in lethality and survivability of surface platforms. The long term implications of distributed lethality may necessitate a revised USN approach to basing and shipbuilding – it could also prompt regional arms races as potential adversaries respond to distributed lethality by expanding their ISR and A2/AD capabilities in kind.

The strategic implications of employing USN surface forces using Distributed lethality concepts are considerable. Operationally it acts as a direct response to A2/AD concepts, complicating adversary sea denial efforts by filling the sea space with small groups of well-defended, heavily armed platforms, each of which is capable of producing additional deception and counter-targeting effects. Politically, doubling down on presence in the form of surface combatants will reinforce deterrence by complicating the operational picture, enable persistent challenge to the excessive maritime claims of regional actors, and counter larger strategies designed to weaken US influence. By creating uncertainty on the part of potential adversaries, distributed lethality ”…aims to degrade an adversary’s confidence in their weapons rather than through overwhelming force…,”[2] fundamentally altering calculations of risk and lowering the potential payoffs of initiating hostilities. Distributed lethality also acts to reassure and support US partners and allies by providing consistent presence and support, strengthening our coalitions abroad.

It is in the economic details that the viability of distributed lethality becomes a bit murkier. In the short term, the Navy has actually done very well by capitalizing on existing systems. Rapid acquisition and fielding efforts are currently underway to build a long-range strike capability to replace the aging Harpoon by adapting existing systems; possibilities include the Long Range Anti-Ship Missile (LRASM), the Norwegian Kongsberg Naval Strike Missile [3], the SM-6 [4], and a proposal to modify existing stocks of TLAMs for anti-ship missions [5].  Survivability has also been addressed in the same way with an ongoing project to update and integrate SeaRAM [6].  All of these efforts are a testament to the Navy’s commitment to implement distributed lethality without calling for larger budgetary outlays. This makes distributed lethality easier to sell on the Hill and allows the Navy to claim the high ground on this issue in terms of resource utilization.

None of this changes the arithmetic of force generation required to create persistent presence.  There are only so many forward deployed platforms overseas, certainly nowhere near enough to complicate the operational picture of potential adversaries.  Sooner or later the Navy will need to reassess its ability to support distributed lethality with current platforms, systems, and budgets; achieving the desired effects (dispersal and deterrence) will require cost-effective numbers of platforms to be maintained on-station. Surface combatants will need to transit back and forth from CONUS bases, taking up large periods of time moving to and from operational areas.

In order to maximize loiter time and capitalize on existing platforms, the Navy should take a long hard look at the forward basing of more surface combatants.  This will require close engagement with host nations and long term investments in infrastructure; shipyards, repair facilities, distribution centers, housing, and administrative activities would all need to be expanded to support additional hulls. The LCS, although designed as a littoral platform specifically in response to swarming attacks, partially fulfills the requirement for numbers of hulls, although the details of this system are still being worked out and the Navy is now working on an expanded “fast frigate” concept based on the LCS [7].  Small surface combatants have been proposed as a partial solution [8], offering cost-effective platforms that can be produced in quantity – but not without some compromises in survivability. It seems certain that the Navy will have to seek a balance of quantity and quality, and this will require a reassessment of design concepts.

Finally, by its very design, distributed lethality is intended to elicit a desired reaction on the part of potential adversaries [9]. A2/AD strategies were adopted by regional actors as an asymmetric response to US power projection capabilities, in direct support of their perceived interests; these countries will not simply drop this approach in the face of multiple hunter-killer SAGs operating nearby. They will undoubtedly expand their investment in ISR and A2/AD capabilities, responding with both increased quantity and quality of their own.  This increased expenditure of resources will produce comparatively greater strain on the more modestly sized and resourced militaries of these countries, many of which already labor under sanctions. Technological and industrial competition will almost certainly increase as a result.  Luckily, as the world leader in innovation, such a situation would favor the US, but only in general terms and with considerable uncertainty.

LCDR Josh Heivly is an active duty Navy Supply Corps Officer. The views voiced here are his alone and in no way represent the views of the US Navy or the Department of Defense.

One thought on “Enabling Distributed Lethality”