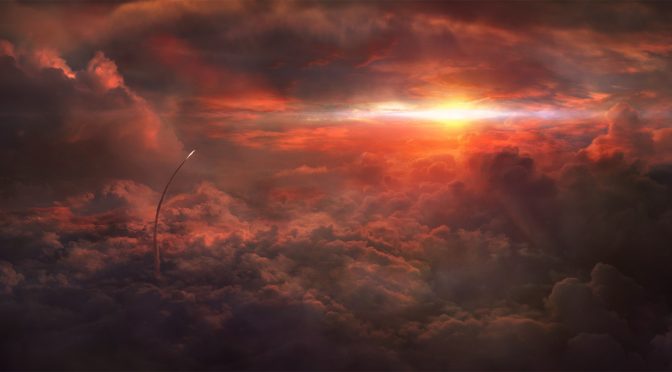 The task force was transiting a lightly-used shipping lane, moving to an exercise in response to the tensions that always seemed to pop up. Due to the collisions between Navy and civilian ships in recent years, Navy policy mandated the task force turn on their AIS transponders, broadcasting their location for all to see. For those aboard the ships it was a bright sunny day for the exercise to begin, the Pacific weather lovely as always seen in movies.

Lurking close by in the shipping lane were two innocuous cargo ships, with their containers stacked high, like the traffic one sees going though the Straits of Malacca. But these were no ordinary cargo ships. Their crews had been specially embarked days before, and had anyone noticed, they had military men on them. If any of the dockyard workers had cared to say anything, their better judgment stopped them. Onboard the special crews noted the turning on of the AIS transponders. Within several minutes they had the Club-N’s in their shipping container launchers prepped and ready, the data from the AIS being fed into the targeting chips of the missiles. The order to fire was given, and the peaceful day was shattered with the roar of the sea skimming missiles leaping out of their launchers.

The first missile launched at that time, unlike its compatriots, rent the sky in two. Within the first few seconds of its life free of its launcher its trajectory threw it upward to make it visible to radar. The radars onboard the task force immediately recognized the missile as a Club-N, its body a clear contrast to the blue sky surrounding it.

Onboard each ship in the task force, smuggled in by contractors by flash drives, was a virus waiting for this moment. In the first few milliseconds all the task force’s early warning alarms were shut off by the virus, so fast that the crewmen standing watch on the bridge wouldn’t have noticed even if they had been paying attention. At the same time, hours of previous uneventful sensor data was fed back to the task force’s radars by the virus. The watch was still blissfully unaware of what was to happen. Outside the weather was still clear and beautiful.

While in port a spy had planted modified aircraft engine repair micro drones onto the ships in the task force. This type of drone was commonly used to fix miniature scrapes and dings in an aircraft engine, but these instead had been adapted to destroy. They carried tiny files, and their bodies contained explosive. They slowly worked away at the Phalanx CIWS’s onboard, their tiny files chipping away at their wiring and electronics. Their task done the drones hid and waited, their tiny explosives standing ready to disable the Phalanx CIWS’s had they not done their work properly.

Two days previously the task force had transited though an area that was being prospected for magnesium nodules. The task force’s sonars picked up several prospecting drones and their mother ship in the area, but they saw no drones come close to the task force. Another set of drones they had failed to pick up had been converted. Taking off the shelf magnesium prospecting drones, and utilizing a new stealth anechoic coating developed in Singapore, these drones were almost invisible. Armed with torpedo warheads, these drones had sidled up to the ships and latched on like a remora, unnoticeable unless one was to dive below the ship.

The task force’s first warning of the Club-N’s was right before they hit. The Phalanx’s CIWS’s that hadn’t already been totally disabled tried to move into action, but at best spit out a thin blanket of misdirected fire before the micro drones detonated, and finished it off. Undaunted by the minimal fire put out by the task force, the Club-N’s closed to contact. Their explosions ripped through hulls and lifted ships out of the sea. The water turned a frothing brown and ships succumbed to the onslaught. The commanders still alive were unable to grasp the situation as it had happened so fast. The crewmen on deck could see their task force dying around them.

As the explosions rocked the ships, the converted magnesium prospecting drones felt the tremors and activated. They had spent the past two days aurally locating the engine room of their respective ships. They silently detached and started their motors, matching speed with their ships, moving into position right beneath the sounds of working machinery. Then they detonated. The gas bubble expanded faster than the speed of sound, ripping apart hulls. From above it looked like Charybdis was trying to consume each ship.  Then just as sudden as the bubble arrived, it collapsed, driving water into the broken hulks of what had once been ships.

The task force’s submarine commanders below had only seconds more to react. The magnesium prospecting drones had been too noticeable to use against the submarines in the task force, but another type of drone did the trick. The aircraft engine repair micro drones that had been introduced to the ships had also been inserted into the submarines by a turncoat. Slowly some disabled the torpedoes, abrading away what they needed to with their small files over the course of days. Others sat near the nuclear reactor, biding their time. As they felt the submarine rock from the explosions above, they moved into their final positions and they too detonated. Their tiny bodies contained not enough explosive to damage the nuclear reactor itself, for that was not their target, but more than enough to cause a chaos of burst pipes and destroyed machinery. Onboard fluid rushed from pipes as alarms rang. Had it happed in peacetime it would have been a catastrophe, but what was to come was worse.

For the two Chinese submarines trailing the task force, the explosions were the signal. Both Type 93’s launched several torpedos that rushed through the water like sleek fish. The torpedoes had no problem homing in on the cacophony of noises coming from the task force’s subs, for they sounded like a band in an empty auditorium. The sonar operators onboard each boat watched the torpedoes converge, and then hit. The horrible sounds of the hulls rupturing were heard, the pressure of the sea claiming the submarines as its own. As the horrible shrieks subsided, the fight below the sea finished.

One of the attack submarines that had been trailing the task force surfaced amid the carnage. The submarine had been specially modified for this mission and released a swarm of drones that lazily skimmed over the wave tops. Each drone was equipped with a high-resolution camera capturing footage of the victory. For the government back home the footage was worth its weight in gold. Wars were no longer only matters of weapons, but also of information.

In Hawaii it was yet another beautiful day in paradise. Far away the cyber attack continued, feeding falsified data into the Navy’s systems. For the sailors in Pearl Harbor, the task force was still steaming along and was soon to be clear of the shipping lane. To the rest of the world, the war wouldn’t begin for another six hours…

Evan D’Alessandro is a student at Luther College studying astrobiology, data science, and international relations. He enjoys military history and policy debate, and aspires to become a naval intelligence officer in the future. He can be contacted at  evan.dalessandro@gmail.com.