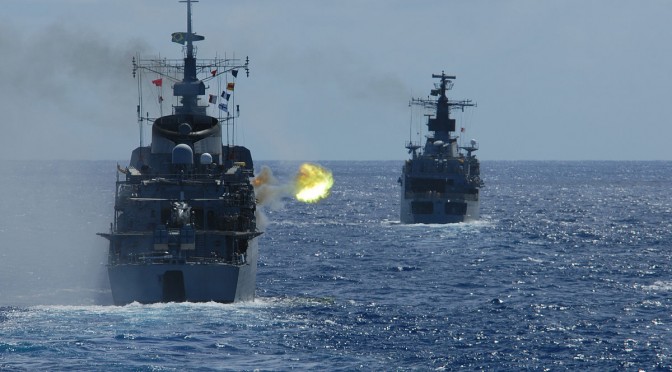 In this article I will try to provide a brief summary of my views on the purpose of navies, the need for them, and where they are bound to go.

When a regular citizen thinks of the sea, he conceives its vastness, and in his mind he envisages a horizon, but what he can’t naturally perceive is what awaits beyond that; he probably cannot fathom what lies beneath the ground, on the seabed, at great depths or on the surface.

It is also likely that he’s unaware of the obligations that nation states must fulfill in multiple areas, which include to safeguarding human lives at sea.

The sea is in itself relevant, as two thirds of the planet’s surface is covered by water[1]. The Southern Hemisphere is comprised of only 19% land,  while in the Northern Hemisphere land is 39% of the earth’s surface.

The importance of the seas and oceans for mankind as a source of resources and unity is an assertion which needs not be analyzed or questioned, considering more than 60% of the world’s population lives along a coast should be proof enough.

In America, as in the rest of the world, “the necessities and burdens of the people” are transported by sea, thus leading to motorways of the sea which never collapse, don’t present roadblocks, and are not affected by human activity[2].

It is worth noting that maritime shipping is relevant worldwide (institutionally) and is increasing in earnest.  The Secretary General of the International Maritime Organization, Mr. Efthimios M Mitropoulos during the commemoration of the world maritime day 2005, remarked: “we live in a global society which is supported by a global economy – and that economy simply could not function if it were not for ships and the shipping industry.”[3]

As Keohane and Nye note,[4] “we live in an interdependent world of power, hence practically no nation can consider itself self-sufficient, given that, generally speaking, there is now a “mutual reliance[5]”.

Resources scarcity is progressively heightened in a world population which is estimated to grow fourfold from 1950 to 2050. Thus, we must ruminate on the location of resources if they are not located within our countries.  The wherewithal to transport them, which will most likely be by maritime means, make resource scarcity an unwavering variable.

This same analysis establishing the convenience of the sea has been conducted from a nefarious stand point by those seeking to conduct a widely spread gamut of illegal activities.

There are multiple threats hovering over the maritime realm, and if states are not paying attention, they will domestically become more vulnerable as a result of their maritime negligence.

Offshore oil discoveries are progressively becoming more important; case in point, Brazil’s Blue Amazon (the South Atlantic), not to mention the statements made by several states regarding their continental shelf.

Along the same line, and as we ponder upon the purpose of a navy, let’s take a look at what happens when faced with a game changer, namely a “black swan” type of event as described by Nassim Nicholas taleb[6] in his book by the same title. If we begin to ask ourselves about who is ready to deploy, capable of providing support to an ally lacking an airport to land in, it is generally the navy who is able to get there and respond with its prepared and trained maritime assets. We only need to recall what took place in Haiti, 2010, where the navies were the first to set foot and recover transportation infrastructure, provided first response services and established a command and control system tailored to the emergency.

The navy is able to deploy from one side of the globe to another in its pursuit to protect its interests, and can additionally do so in order to protect their fellow citizens when they fall victims to a disaster.

The ability to have a hospital ship serve as a first responder providing relief when emergencies strike, carries value that may be underestimated but not denied as a state capability when faced with their own urgencies or demands.

Moreover, we must not lose sight of the founding purpose of a navy as it provided assistance to countries of the hemisphere in their efforts to develop inhospitable areas with their relentless force opening up navigable waterways while ensuring the delivery of supplies into territories that were nearly forgotten.

Globalization has created and increased international linkages. Navies are not lagging behind this trend with international exercises which allow for an exchange of experiences and know-how, while raising teamwork skills and potentially forging an international naval force in the future.  This force is currently seen in the form of various international naval exercises under many different designations dependent upon the participating nations. These exercises conclude with a wealth of lessons learned.

Navies will follow mandates dictated by their civilian authorities; they will be downsized, reorganized or even abolished. Regardless of their fate, nothing will change or deny the reality of things, and what it would mean to not possess a navy, or to have one that is inefficient or inoperable, and how that translates into a lack of awareness regarding the real magnitude of the world stage in which we live, where state interests are what’s at stake and how they can always be supported from the sea.

In conclusion, I would like to highlight the fact that I perceive a clear lack of communication with society regarding naval and maritime operations, and how the need for the sea will not decrease, nor will the need to dispose of the sea as the means for carrying out illegal activities change.  The sea generally provides the ideal means to provide support during domestic and international emergencies.

Lastly, we only realize the importance someone or something holds, until they’re gone, I’m sure any reader can relate to this, so then let’s not allow for this to occur to our navies.

[2] N. del A. In general here, we need to make an excepcion for Piricy an Terrorism at sea

Dr. Roberto Pereyra is a retired rear admiral in the Argentine Navy and senior professor at the Inter American Defense College.