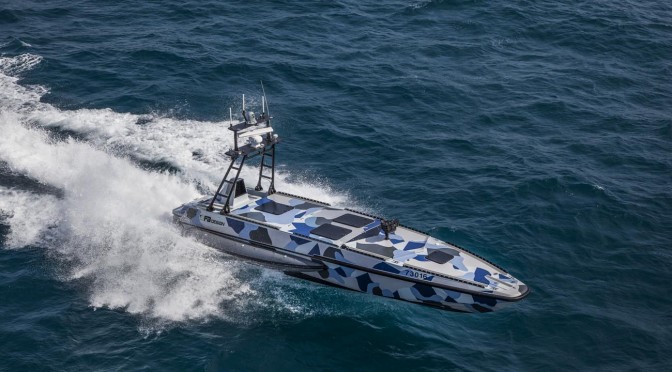 Let’s face facts: it appears the U.S. Navy is incapable of building surface combatants, even small ones, for less than about a billion dollars apiece.  Consequently, it is likely the fleet will continue to shrink for the foreseeable future.  Yet it appears that the global demand for surface ship presence remains high for both peacetime operations and as an on-call force for contingency response.  So how can the Navy continue to meet worldwide operational commitments given fewer ships?  The key to maximizing the effectiveness of a declining surface force lies in combining suitable motherships with the latest unmanned warfighting technology.

Unmanned naval systems are rapidly proliferating internationally because they are increasingly capable and cheaper than manned alternatives for certain missions.  To date, sea-based unmanned systems have primarily conducted intelligence, surveillance, reconnaissance and mine countermeasures operations.  But within the next decade or so, we’ll see naval drones supporting a much wider spectrum of warfighting; including anti-submarine warfare, anti-surface warfare, electronic warfare, vertical replenishment, and even anti-air warfare.

Fundamentally, naval warfare is about deploying payloads (sensors, weapons, and people) into different domains (water, air, land, and electromagnetic/cyber) from or against sea-based platforms.  These payloads have historically been delivered from ships, submarines, and aircraft.  Ships deploy offensive and defensive weapons, or those of their embarked aircraft, out to the limit of their organic sensors.  Sometimes they can be delivered over-the-horizon when cued by the sensors of another platform.  A guided missile destroyer fires its magazines of anti-aircraft weapons at targets it can detect and track.  A frigate deploys a single towed array sonar and perhaps a helicopter with sonobuoys and torpedoes that extend the reach of its ASW reach. A corvette can engage a surface threat within the range of its guns and surface search radar or electro-optical fire control system.  The point is that current naval operations are generally designed around weapons and systems hosted from surface combatants, so the number of primary platforms available limits the span of a Navy’s operations.

By employing distributed maritime operations, a single surface platform with embarked unmanned vehicles can operate over a wider area than one without.  Using a multi-tiered hub-and-spoke concept, a large surface ship should be capable of simultaneously operating dozens of air, surface, and sub-surface vessels.  Some of these would be launched from an intermediate staging craft carried on the mothership such as a RHIB or Unmanned Surface Vehicle, while others will launch directly from the main ship.  Currently, many of these intermediate platforms are manned, but in the future, large volume unmanned underwater vehicles and unmanned surface vehicles will operate for several days or more independently from a larger mothership which transports them into an operational theater.  The persistent over-the-horizon UUVs and USVs will deploy their own smaller drone counterparts to transport sensors or weapons the last dozens of miles to a target.

Despite more than a few hiccups in her development, this distributed operations model is roughly the construct that the Littoral Combat Ship (LCS) will follow.  The off-board MIW and ASW mission packages will consist of a variety of UUVs, USVs, and the MQ-8B Firescout UAV.  The LCS was designed to shift out entire mission packages to use the same “sea frame” for surface, anti-surface, or mine counter-measures operations, although not at the same time.  The intent of this modularity was additional flexibility with fewer platforms; however, that concept of operations has not panned out because the ships will not be capable of shifting warfare areas as quickly as originally envisioned.  Rather than focusing on the LCS’ modularity and ability to transfer wholesale mission packages, it would be wiser to shift attention to finalizing the actual vehicles and interfaces that will support these warfare mission areas.  Moreover, LCS unmanned payloads that are not compatible with other vessels should be scrapped immediately.  With the future of the LCS program uncertain at best, unmanned vehicle integration lessons learned should be leveraged for other platforms. Flexibility and compatibility with multiple platforms are the key to ensuring a distributed operations model is successful.

Ships that feature spare volume for additional payloads and “interfaces” – flight decks, well decks, ramps, davits, and cranes – will be in highest demand for distributed operations involving drones.  So in addition to LCS, amphibious ships, the Joint High Speed Vessel (JHSV), Mobile Landing Platform (MLP), and other Military Sealift Command ships are included in this category.  In tune with the CNO’s “payload over platform” theme, given these attributes, ships that might otherwise not be considered state of the art warfighting vessels can have a new lease on life as unmanned motherships.  And ships that have generally been considered auxiliaries will now play a role in supporting offensive naval warfare by deploying sensors and weapons systems to complement the main batteries of high end surface combatants.  The end result of these drone motherships will be more sensors and weapons deployed across a wider ocean area with the same, if not smaller number of surface combatants.

The venerable Ponce’s recent conversion into an Afloat Forward Staging Base and its ongoing Arabian Gulf deployment is telling.  Ponce flew the ScanEagle UAV from her own flight deck, but also demonstrated the ability embark several Riverine Command Boats (RCBs) which can operate the PUMA UAV.  In a wartime scenario, each of these UAVs could support targeting for surface engagement (whether from a VBSS team or anti-surface missile).  During International Mine Countermeasures Exercises, Ponce deployed RHIBs with multiple mine-hunting UUVs.  So while a traditional surface ship might operate a boat or two and the same number of helicopters, using unmanned vehicles, that same platform can deploy numerous sensors and weapons at a considerable distance from the ship across all maritime domains.

Distributed unmanned operations will require new concepts in afloat logistics.  Moored undersea docking stations to recharge the batteries of long range UUVs should be designed for air or surface deployment.  Unmanned air vehicles flying from surface ships will also support vertical resupply of distributed sea and ground elements operating hundreds of miles from their motherships.  This concept has been demonstrated successfully ashore with the K-MAX rotary wing vehicle which has flown 17,000+ sorties in Afghanistan since 2011, delivering over four million pounds of supplies to Marines in remote forward operating bases.

The critical path to operational success will be tying all these systems together. Common technology standards and protocols must be developed sooner rather than later as discussed in detail here by Captain Lundquist.  Rather than relying on 40 year old legacy data-links, the architecture that connects manned and unmanned systems, regardless of domain, should be secure, light-weight, high-bandwidth, and affordable.  With today’s technology, those attributes need not be mutually exclusive.

The challenges and limitations to deploying these distributed unmanned concepts are non-trivial.  In addition to the issues with standards discussed above, autonomous algorithms need improvement, electrical storage capacity (especially for UUVs) must be increased, and cultural apprehension to offensive unmanned vessels need to be overcome.  But shrinking operational reach need not be a foregone conclusion with declining fleet size if the next wave in operating unmanned vehicles distributively is embraced.

CDR Chris Rawley is a surface warfare officer.  The opinions expressed are his own.

3 thoughts on “Unmanned Systems and Distributed Operations: Out of One, Many”