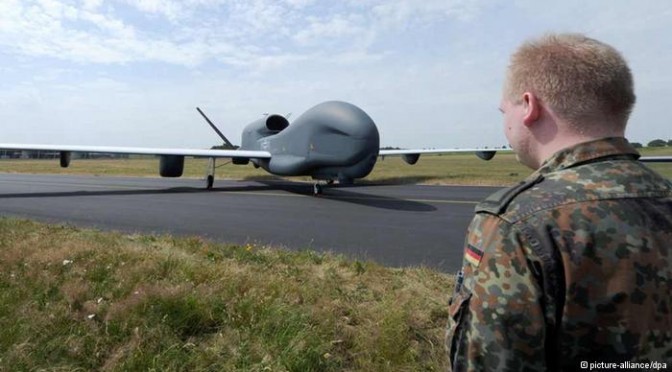 This is the first article of our “Drone Week”, which has been slightly truncated by the Crimean Crisis.

In most ‘drone’ conferences, there comes an awkward moment when a panelist realizes that the category ‘drone’ has very little to do with the question that they’re asking.  To quote the Renaissance philosopher Inigo Montoya, “I don’t think that word means what you think it means.”  In order to improve the remote aviation technology discussion, we need to be clear what we’re actually talking about.

What we should be talking about is ‘remote aviation technology,’ which is simply a fusion of the air and cyber domains through the ubiquitous technologies of datalinks, autopilots, and performance airframes.  The fundamental tension is not between risk and responsibility, the two things over which the pop-sci-strat ‘drone’ debate obsesses, but between latency and performance.  To the risk point, a military has a moral obligation to reduce risk to its warfighters, so reducing risk through tech is not new; to the responsibility point, professionalism and integrity are the roots for the warfighter’s seriousness about their duties, not risk.  We find that we’ve actually been dealing with these questions for a while – so we have some pretty effective models already, which we can use as soon as we get the definitions straight.

First, we must take all the conceptual rocks out of the ‘drones’ rucksack.  We can say definitively what we aren’t talking about.  We are looking only for questions that are new or fundamentally altered by remote aviation technology: any discussion that can be understood through extant tech or literature probably should be.  What is not changed by the advent of remote aviation technology?

With these big rocks removed, we find two things left in this analytical rucksack of ‘drones.’  At the bottom of the pack, there’s a pile of emotional sediment in the shape of scary killer robots, and autonomous, invincible sci-fi nightmares that make war risk-free at the cost of our humanity.  Using these fictions to reason about actual remote aircraft is much like using the Easter Bunny to think about the role of rabbits in ecosystems.  Since these tropes and this misguided inter-subjectivity drives much of the public pop-discourse, we are certainly not talking about this ontological flotsam.

This leaves only the aircraft themselves, which is precisely what we want.  We’ve argued in other works that, for most discussions, we should consider Predators, Reapers, Global Hawks, UCLASS and so on the same way we consider any other aircraft – by mission, not by control system.  E.g., for almost all intents and purposes, Reapers are persistent reconnaissance-attack aircraft.  Similarly, we generally don’t consider the F-16 and the C-17 as ‘the same thing’ because they both have fly-by-wire systems.  But sometimes it matters that they have fly-by-wire systems vice electro-hydraulic control cables – e.g., for example, during an EMP event.  And sometimes, it matters that a ‘fly-by-wireless’ control system drives the Predator, Reaper, Global Hawk, the BQ-8 (Modified B-24),  the SAGE F-106, the Sukhoi-15TM, and so on.

How, then, does a ‘fly-by-wireless’ system matter?  The presumed tension for this technology is risk vs. responsibility – long-range datalinks reduce risk to the pilot, and since the pilot has ‘no skin in the game,’ they are presumed to be less invested in their choices.  This is deeply problematic – a military has a moral imperative to reduce risk to its warfighters.  Secretary Gates’ continually and rightly obsessed over body armor, MEDEVAC, and other risk mitigation technologies – this was a testament to his integrity.

While it is certainly true that increasing distance reduces risk, this does not inherently change warrior’s perception of his or her own responsibility to the mission and to comrades.  A lack of responsibility about killing results from a lack of professionalism or integrity, poor training, or other personnel problems.  SSBN crews isolate their weapons from risk through technology, and are similarly distant from their potential acts of killing.  I trust that our submarine community sees their duties with the deadly seriousness that they deserve.  Risk reduction through technology is ubiquitous, and these reductions do not undermine warfighter responsibilities: this is not truly a tension.

Similarly, advocates of ‘supply-side war control’ cite this risk point – the theory being that, without having to put constituents at risk, policymakers will be more willing to go to war.  If the risk vs. responsibility logic plays out on a strategic level (and if this is so, it is due to the political construct of ‘drone warfare’ rather than the technology itself), this tension is better answered through accountability for strategic choices rather than by inducing risk on our warfighters.  Just as Creighton Abrams’ attempt to downgrade the Special Operations community did little to keep the United States out of small wars, this approach is unlikely to deter policymakers.  For jus ad bellum questions, it is far better to focus on the pen of policymakers than on the red button of warfighters; better to locate risk at the ballot-box than in than soldiers’ lives.

These points are covered at length by BJ Strawser and his co-authors in Killing by Remote Control: air warfare has no special moral problems inherent to the technology.   So we will have to look further to understand how and why the tech matters.

What, then, is the actual tension of remote aviation technology?  Latency versus performance.  On one hand, a ‘fly-by-wireless’ control system allows the aircraft to keep weighty, expensive and risky components of the aircraft on the ground, where the performance constraints are far less pressing.  Accordingly, without the limitations of a human body and without cost of life support systems, designs that would otherwise be impossible can be fielded.  This performance can be cashed out as:

The downside is latency.  For ‘fly-by-wireless’ control systems to work, there must be a way to port human control and judgment to the craft.  In a manned aircraft, where the crew builds situational awareness in an expanding ‘bubble’ around the craft; in a remote craft, the crew must ‘drill’ from their control station, through a web of datalinks, into their craft.  The negative result of this process is that the remote aircraft will typically be slower than an equivalent manned aircraft; this is offset by the ease with which a remote aircraft can link to offboard assets for situational awareness.  Still, the fundamental problem of the link remains.  There are two approaches to solving this problem:

If latency vs. performance is the fundamental tension of this technology, then much of the contemporary debate misses the mark.  For example, ‘optionally manned’ aircraft are touted to bridge the gap between manned and remote craft.  From a risk-vs-responsibility frame, this makes perfect sense – if you want to send the craft on a high-risk mission, leave the pilot at home.  But from a latency-vs-performance frame, it recalls the old joke about Washington, DC: a town with Southern efficiency and Northern charm.  Since one cannot cash back in the weight of life support systems and the like when they leave the pilot on the ground, optionally manned aircraft have the latency of an RPA and the performance of a manned aircraft – the worst of both worlds.

‘Complement,’ as described by my friend and classmate Rich Ganske, is a much better answer.  If humans excel at judgment, and robots excel at math, then when the robots can do more math, it frees up the humans to do more judgment.  The partnership between humans and hardware – both onboard and offboard hardware – is, and long has been, the key to dominating the battlespace.  The natural contours of remotely-piloted aviation tech complement well the natural contours of directly-piloted aviation tech – they are each strong where the other is weak, and together are better than either is alone.  How does this look, in practice?  For two non-exhaustive examples:

We’ve described a number of things that are only orthogonally related to remote aviation technology: air strikes, air campaigns, sovereignty and remote killing.  Once we removed those rocks from our rucksack, we were left with ‘fly-by-wireless’ control system technology.  We wrestled with the supposed primary tension of the technology – risk vs. responsibility, which we reject.  Our proposed primary alternate tension is – latency vs. performance.  There are three ways to gain improved performance from a remote control system: persistence, survivability and affordability; each of these has strengths and weaknesses in different environments, and are generally in tension with each other.  There are two ways to solve the remote latency problem: physics, which may involve partnering manned aircraft, and automation, which has problems dealing with complexity.  Ultimately, we argue that the best answers pair manned and remotely piloted aircraft together. Remote aircraft add tremendous performance to the team, while manned aircraft provide essential situational awareness and judgment to complex combat.

Dave Blair is an active duty officer in the United States Air Force and a PhD student at Georgetown University.

2 thoughts on “Remote Aviation Technology – What are We Actually Talking About?”