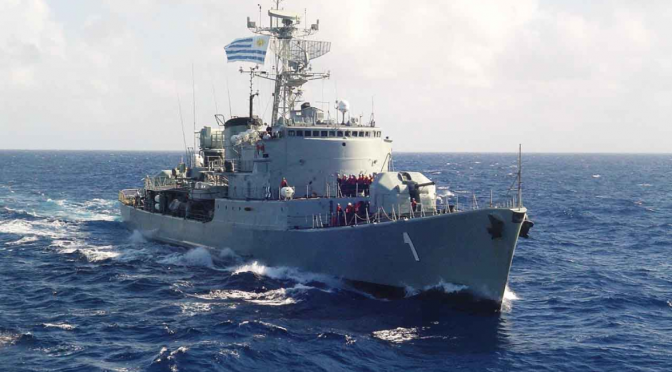 Uruguay’s continental shelf control has been extended to 350 nautical miles. On 30 August, the United Nations Commission on the Limits of the Continental Shelf (UNCLCS) ruled in favor of the South American nation’s request to extend its maritime territory by 83,000 square kilometers. While this is a major diplomatic victory for the Uruguayan government, the new territory will need to be properly patrolled, which means additional pressure on the Uruguayan Navy that currently operates with an aging fleet.

The author of this commentary argues that Uruguay’s new maritime territory should be a starting point for a greater discussion about the future of its Navy, both in terms of its future fleet composition and missions.

It is important to stress that the Uruguayan military has not been in an inter-state conflict in over a century. Its last major confrontation was the War of the Triple Alliance (1864-1870). In the 20th century, Uruguay supported the Allies in World War II (the 1939 Admiral Graf Spee incident occurred in Uruguayan waters). The only other major challenge to Uruguayan sovereignty occurred in the late 1960s to early 1970s when Uruguayan security forces battled the Tupamaros, a local insurgent movement.

In the 21st century, Uruguay has only had one small international incident. Between 2005-2010, the Uruguayan and Argentine governments had a diplomatic and legal dispute regarding the construction of a pulp mill in the Uruguay River, which serves as a border between the two states. Even though no conflict ever occurred, former Uruguayan President José Mujica famously declared in 2011 that he had contemplated the possibility of a war with Argentina over the pulp mill and had met with his military’s commanders about possible scenarios.

Nowadays the Uruguayan military, and the Navy in particular, is in a dire state given limited budgets which prevent the acquisition of new heavy platforms.

In August, Admiral Leonardo Alonso, commander of the Uruguayan Navy, declared that the fleet has 12 operational sea platforms. The fleet composition includes a Joao Belo-class frigate, the ROU Uruguay; two Kondor II-class minesweepers, the ROU Temerario and the ROU Audaz (the ROU Fortuna was retired in 2014); the oceanic patrol vessel ROU Maldonado the support vessels ROU General Artigas and ROU Vanguardia. Additional vessels include the tugboat ROU Banco Ortiz; the oceanographic ship ROU Oyarvide; the ROU Sirius; and the patrol boats ROU Colonia, ROU Rio Negro, and the ROU Paysandu. According to Uruguayan media, the average age of the fleet is 50 years (e.g. the Joao Belo frigate was constructed in the late 1960s).

A strongly worded op-ed in the daily El Observador op-ed published on 20 August, provocatively titled “Who Needs the Armed Forces?” stresses how the Navy is “bankrupt, not only because of its aging fleet, its lackluster training and small budget, but due to corruption scandals in recent years that have affected the morale.”

For the past couple of years, the Uruguayan military has attempted to purchase modern offshore patrol vessels (OPVs), which will be the cornerstone of the future fleet. The Navy has apparently selected Lurssen’s OPV 80 model and reportedly plans to procure three platforms in a deal which will cost an estimated USD $250 million. To date, no contract has been signed yet as the government appears to lack sufficient funds to purchase the vessels.

The Uruguayan Navy has been lobbying the government for new funds and the approval of the OPV-deals in order to properly monitor the country’s growing sea. Admiral Leonardo Alonso has declared to the Senate that on any given day the Navy detects around 350 ships in Uruguayan waters “but we only see the ones that wish to be detected, which have their equipment on and are identified by our sensors,” which means that the country is vulnerable to “piracy, maritime accidents, pollution, drug trafficking, smuggling, and illegal fishing.” In an e-mail interview with the author, an Uruguayan naval officer explained that “in Uruguayan waters there is an average of 200 vessels (cruising or anchored) carrying out different tasks. This volume means that without proper control of maritime traffic, the probability of accidents and incidents escalates.” The officer also highlighted the necessity of a coastal surveillance network for Vessel Traffic Services (VTS) to aid the activities of the (yet to be acquired) OPVs and their support helicopters.

While this analysis is focusing on the Uruguayan Navy’s platforms and equipment, it is necessary to briefly mention personnel woes. The Uruguayan officer explained to the author that it is also vitally important “to retain our personnel and prevent a migration to the private sector as they seek salary improvements.” The problem of preventing qualified military personnel from migrating to better paid (and less dangerous) positions in the private sector is an issue that affects many militaries across the world.

It is in this problematic situation that the UNCLCS’s ruling enters the equation. Montevideo first requested the UNCLCS to expand its continental shelf beyond 200 nautical miles in 2009. “Uruguay has a special interest in expanding its continental shelf rights since it is currently involved in the search for oil and gas in the so called Punta del Este basin,” explained a September 2009 report by MercoPress.

According to Uruguayan media, a Uruguayan delegation met with a UNCLCS commission 21 times to argue its case between 2011 and 2015. The aforementioned naval officer also highlighted the role of the oceanographic vessel Oyarvide and the Navy’s Oceanographic, Hydrographic, and Meteorological Service in contributing to the case made to the UNCLCS.

In 2016, Uruguay presented its case to the plenary of the UNCLCS and the Commission decided in favor of Montevideo’s request to expand its continental shelf to a total of 350 nautical miles on 30 August. According to IHS Jane’s Defense Weekly, “the new territory grants mineral and resource rights over the continental shelf (sea floor) but it does not grant fishing rights over the new area.” Meanwhile, the Uruguayan daily El Observador explains that the country now has more maritime territory than dry land.

The UNCLCS’s decision has been a massive victory for the administration of President Tabaré Vázquez. In fact, the Uruguayan Minister of Foreign Affairs, Rodolfo Nin Novoa, has declared “nobody can do anything [in these waters] without Uruguay’s authorization.” The minister’s statement was perhaps too bold as the aforementioned Admiral Alonso has highlighted the problematic situation of the Navy while Defense Minister Jorge Menendez has stressed the need for USD $250 million to upgrade the fleet (namely to acquire the OPVs).

The expansion of Uruguay’s continental shelf should serve as a starting point for a discussion about the future of its Navy. Given the lack of an external security threat (the author has discussed South Atlantic geopolitics in a 17 February commentary for CIMSEC, “How Peaceful is the South Atlantic?”), particularly as the pulp mill diferendum with Argentina appears to have been solved, the Uruguayan armed forces have had to reinvent themselves in recent decades to justify their existence. Case in point, the country is a major supplier of peacekeepers to the United Nations – as of 31 August, Uruguay has a contingent of 1,457 troops participating in UN peacekeeping missions.

Regarding the Navy, its current and future challenges are transnational and irregular in nature. Rather than worrying about the Brazilian nuclear or Scorpene submarines appearing on its coast, the major maritime security threats include drug trafficking, illegal fishing, maritime pollution, as well as search and rescue operations.

Illegal fishing is a major problem for governments around the world, and the South Atlantic already has the precedent of the March incident between the Argentine Coast Guard and an illegal Chinese fishing fleet that highlights the need for a well-equipped and modern fleet that can chase and detain (or sink, if violence is necessary) illegal fishing vessels. To this point, the Uruguayan daily El Pais has noted that the country’s waters have fish species like merluza (a cod-like fish), the pescadilla (whiting) and the corvina, which must be protected from illegal fishing.

Another task for the Navy’s future will be to protect future oil platforms that may be constructed in Uruguay’s maritime waters. As a matter of fact, France’s Total company (with U.S. ExxonMobil and Norway’s Statoil as partners) has been looking for oil in Uruguayan and South Atlantic waters, though unsuccessfully so far. The South Atlantic does not have a piracy problem in the sense of oil platforms being at risk of criminal attack. However, if a Deepwater Horizon-type accident were to occur in one of these new wells, the Navy must have capable vessels able to rescue workers in peril and contain potential oil spills and other destruction. It is worth noting that just in late September the aforementioned Audaz and Artigas had to assist the Fortune Harmony, a tanker that had a fire aboard while 20 miles off Piriapolis, Uruguay.

For these operations, the Navy requires new sea platforms, namely OPVs, to support and eventually replace the antiquated vessels it currently operates,  as well as a coastal monitoring network. While this author is not qualified to properly discuss the training of Uruguayan naval officers as well as the budgetary issues, the problem of preventing well-trained personnel from migrating to the private sector affects the Uruguayan Navy like in other defense forces across the world.

Proper surveillance of the extended continental shelf is a critical task for the Uruguayan Navy and will be the cornerstone of its maritime strategy going forward. Incidents like the March clash between Argentina and illegal Chinese fishing vessels (illegal fishing), or the recent Fortune Harmony incident (disasters at sea and possible pollution) are reminders of why it is a priority for a nation with a large continental shelf to have a modern fleet capable of adapting to different scenarios.

With that said, Uruguay’s history and current South Atlantic geopolitics argue that the possibility of inter-state warfare is minimal. Hence, Uruguay must upgrade its Navy, not just in terms of new platforms, radars and helicopters, but also its mission in the 21st century.