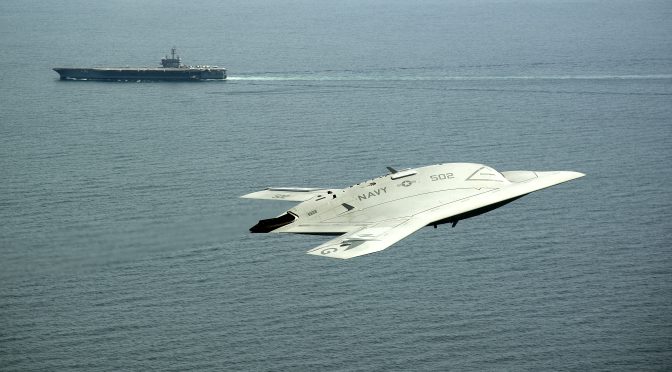 The era of the unmanned aerial vehicle (UAV) has arrived. Phased implementation of the Navy MQ-XX program began this year through a reinvestment in the X-47B unmanned aircraft for use in aerial refueling and Intelligence, Surveillance, and Reconnaissance (ISR). In May of this year the Navy installed the first UAV Command Center aboard the aircraft carrier USS Carl Vinson. These moves demonstrate the need for, and versatility of, sea-based UAVs, and may signal the beginning of a revolutionary migration in naval warfare. Large, land-based ISR UAVs have been operationally employed by the Navy since 2008 with the deployment of the Broad Area Maritime Surveillance-Demonstrator (BAMS-D). Smaller, tactical level UAVs like the Scan Eagle have been in use by the Navy since 2004. To date, all these aircraft have one thing in common: they employ traditional aircraft design to meet their requirement for high power. A new generation of biomimetic UAVs that imitate the natural flight of birds has been developed and shows promising application to Navy missions.

The U.S. Air Force and the Defense Advanced Research Projects Agency (DARPA) have been working on insect-inspired UAVs recently popularized in the media. Some technology, like Aerovironment’s Hummingbird, has successfully implemented the design of bird flight into UAV design. A French inventor has created another little bird, but with a maritime twist. The Bionic Bird mimics the flight and behavior of the swallow and apparently so convincingly that it attracts other swallows and predators alike. Swallows are a common symbol in Navy life because they often appear when ships near land and are thus symbols of good luck.

Edwin Van Ruymbeke, inventor of the $120 Bionic Bird,  proved that small, fast, and maneuverable machines can be inexpensively manufactured. The XTIM Bionic Bird is marketed as a toy, but its technology may prove useful to the Navy. One day, the Bionic Sparrow may visit ships bringing a lot more than good luck.

Using a similar approach, the German company Festo invented a larger UAV dubbed the ’Smartbird,’ which is modeled after a Herring Gull (or seagull).1 It looks surprisingly similar to a real seagull and, at a distance, could be easily disguised as one. The Smartbird’s clever engineering and lightweight design allow for its takeoff and flight to be powered entirely by the biomimicry-inspired twisting flap of its wings. The efficiency of the design is hidden in the specially-developed flapping motion, the size (6.5 foot wingspan), and the weight (1 lb) of the Smartbird. The Smartbird is powered by a 23 Watt motor which, to put in perspective, is roughly the power consumption of a small household fan (model Honeycomb HT-900). This low power requirement is truly remarkable and opens possibilities for major advances in UAV technology.

Although NASA has made many breakthroughs in the deployment of high-efficiency, high-altitude, solar-powered UAVs, the Smartbird offers a very promising solution for application in the low altitude naval environment. The 23 Watt motor of the Smartbird could be charged through a small (2 square foot) solar panel on its wings. The primary problem with solar-power solutions in aviation is weight. The Smartbird works because it is light, so to add any substantial weight to it nullifies the advances of the technology. Through modeling the efficiencies between power and weight, researchers may be able to develop a deployable Smartbird technology with payload carrying capability. An exciting application of this technology would be an ultra-efficient communication relay that could follow a strike group indefinitely and provide a dedicated over-the-horizon data link for the geographic area. This would reduce the need for each ship to have a dedicated satellite communication link and could provide for greater redundancy of systems.

In some civilian airports and harbors, biomimetic UAVs are already providing a significant contribution to operations through bird control. Clear Flight Solutions manufactures the Robird for use at airports and harbor facilities because of its ability to prevent the loitering and nesting of small birds. The Department of Defense, which reports roughly 3000 bird strikes a year, is bound by strict federal legislation when it comes to the conservation of bird species. A 2002 federal court ruling actually shut down Navy training in Guam due to the violation of the 1918 Migratory Bird Treaty Act. The Robird may be a new and exciting tool for the Navy to efficiently and sustainably control bird populations and their very real effect on Navy operations.

This new generation of energy efficient, quiet, and innocuous UAVs has tremendous potential for intelligence collection, communication relay, and even the mundane task of bird control. Future maritime UAVs will likely serve the fleet in many ways while blending into the horizon like the many birds we rarely notice. By taking a hint from nature, we can adapt our UAVs to have the same advantages that maritime birds have over land-based birds. This may mean long-range travel, survivability in high winds, and even high-speed predatory diving. It is remarkable what we can learn from nature and copy for the Navy’s use.