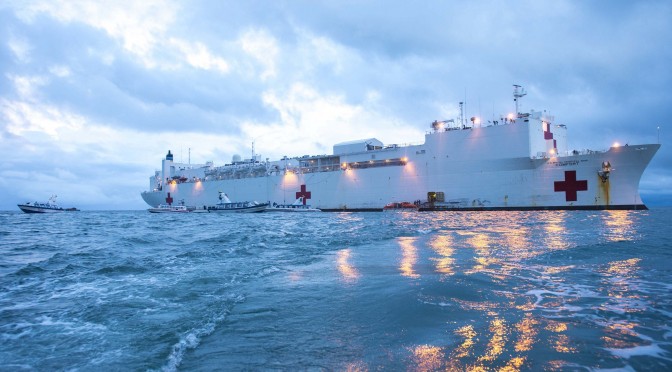 The variety of extreme natural disasters that annually hit U.S. Southern Command’s (SOUTHCOM) area of responsibilities, exacerbated by climate change, demonstrates the Command’s need for a permanently-assigned hospital vessel. While the Command can obtain assets if needed in case of a crisis, like the current deployment of the San Antonio-class amphibious transport dock ship USS Arlington (LPD-24), among other naval units, to Haiti after the deadly earthquake on August 14, there are benefits to having a permanently-assigned hospital vessel.

In an interview that will soon be published by Janes, U.S. Navy Admiral Craig Faller, the current commander of SOUTHCOM, explained to the author that it would be great to have the Mercy-class hospital ship USNS Comfort (T-AH-20) sail annual four-to-six month missions in the region. Comfort last sailed in Latin American and Caribbean waters in 2019.

As part of Operation Enduring Promise 2019, the vessel made 12 port calls across Latin America and the Caribbean, providing free medical services to local populations, an important humanitarian operation that helps win the hearts and minds of civilians and authorities alike.

The role of vessels in HA/DR operations

The Greater Caribbean – meaning Caribbean and Central America – is a region that knows very well how catastrophic these disasters can be. Just in the past decade these areas experienced the devastating 2010 and August 2021 earthquakes in Haiti and the April 2021 La Soufrière volcano eruption in Saint Vincent and the Grenadines.

Moreover, the region is hit annually during its summer months with frequent hurricanes, which are existential threats to many countries. Hurricane Irma in 2017, for example, hit Antigua and Barbuda particularly hard, as ReliefWeb explains,

“The impact on Barbuda was particularly severe as the eye of the hurricane passed directly over the island; 81% of Barbuda’s buildings were reported to have been destroyed or severely damaged, and the island was deemed uninhabitable, as all resident households (HHs) on Barbuda were seriously affected by the hurricane.”

In November 2020, past the usual hurricane months, Hurricanes Eta and Iota, category 4 and 5 respectively, hit the Colombian Caribbean islands of San Andres and Providencia, and then made landfalls that affected El Salvador, Honduras, Guatemala, and Nicaragua with devastating results. Climate change will increase the strength of the hurricanes that hit the region for the foreseeable future, making regional cooperation and partnerships all the more important.

In response to the devastation caused by the two hurricanes the Arleigh Burke-class guided missile destroyer USS William P. Lawrence (DDG-110) “arrived off the coast of Honduras… to support Joint Task Force Bravo’s (JTF Bravo) mission by conducting familiarization flights, delivering medical supplies, and coordinating with other JTF Bravo assets to identify future HA/DR needs.” U.S. Navy helicopters and U.S. Army watercraft also participated in the relief effort. SOUTHCOM’s 2021 Posture Statement explains that by working together with partners and components like JTF-Bravo, the Command “[conducted] search and rescue operations and [delivered] lifesaving aid to areas isolated by the storms, delivering over 1.2 million pounds of life-saving humanitarian aid and rescuing 852 people.”

As for the response effort to the recent earthquake in Haiti, apart from Arlington, other ships deployed include the Freedom-class littoral combat ship USS Billings (LCS-15), and USNS Burlington (T-EPF-10), a Spearhead-class expeditionary fast transport ship. A total of six U.S. ships have been deployed as of the end of August. RFA Wave Knight, which serves in the Royal Navy, and the Mexican ships ARM Papaloapan and ARM Libertador have also been deployed.

One vessel that was not in Central America after the 2020 hurricanes or the recent incidents in the Caribbean islands was Comfort. The hospital ship last deployed in Latin American waters in 2019 (my commentaries for CIMSEC on Comfort include “USNS Comfort’s Latest Humanitarian Mission Throughout Latin America,” and “The Significance of U.S. and Chinese Hospital Ship Deployments to Latin America”), even though it has proven to be a critical component of SOUTHCOM’s strategy to strengthen relations with regional partners by providing civilians free and efficient medical services. While the ship has other duties and maintenance requirements, its value to SOUTHCOM’s HA/DR operations is undeniable.

What are the Options?

The US Navy is currently considering the expansion of its fleet of medical vessels to replace Comfort and its sister ship USNS Mercy (T-AH-19). For example, the Australian shipyard Austal displayed a model of its expeditionary medical ship (EMS) during the Sea Air Space 2021 defense expo, held outside Washington DC, in August.

Another proposal to revamp the Navy’s medical ship fleet was made in a July 2 CIMSEC commentary by Lieutenant (Junior Grade) Misty Wilkins, a US Strategic Sealift Officer. Lt (j.g.) Wilkins proposed that unused offshore supply vessels (OSVs) “are ready to be used and ripe for re-purposing to meet Navy, Marine Corps, Army, and Air Force needs.” The officer proposed that “these vessels could be converted at relatively little cost and would likely be available much sooner than the time needed to construct and test the [Expeditionary Fast Transport] ambulance ship concept.”

I certainly agree with Lt (j.g.) Wilkins’ argument, and I would take it one step further, highlighting that the U.S. fleet requires more hospital ships not solely for wartime missions but also to help with HA/DR operations, which are a critically important activity for a command like SOUTHCOM.

Therefore, in the very near future, an OSV-turned-ambulance ship must be permanently assigned to SOUTHCOM given the constant activities the Command carries out in its area of operations. While units like LCSs or destroyers are certainly helpful to HA/DR operations, it would be even more beneficial to have a specially-designed hospital vessel deployed annually in the region and ready to help with disaster relief when, not if, it is needed. Admiral Faller explained to me during our interview for Janes that it would be great if SOUTHCOM had Comfort deployed annually. This type of assistance and cooperation would strengthen US relations with partners and allies throughout the Western Hemisphere, and win the hearts and minds of regional populations.

The Case for a Permanent Ship

SOUTHCOM and its naval component, U.S. Fourth Fleet, do not have ships permanently assigned. Rather, SOUTHCOM deploys a variety of units that are assigned on rotation, including Arleigh Burke-class destroyers and LCSs. Admiral Faller has requested additional ships to combat drug trafficking and monitor the activities of U.S. adversaries like Venezuela in the region.

SOUTHCOM’s leadership is very aware of the challenges and threats (not just drug trafficking-related) that regional partners face. Thus, the Command trains with Caribbean forces via exercise Tradewinds, tabletop exercises, and also works with agencies like the Regional Security System and the Caribbean Disaster Emergency Management Agency (CDEMA). The goal is for regional forces to cooperate more effectively when the next hurricane or other type of disaster occurs.

Given that natural disasters afflict Latin America and the Caribbean, combined with the success of medical assistance operations like what Comfort has carried out in the recent past, SOUTHCOM has demonstrated the need for a permanently-assigned hospital vessel in order to be ready for the next HA/DR operation or medical deployment to its area of responsibilities. While the likelihood of SOUTHCOM obtaining additional warships is low, the Command should still lobby for a permanent hospital vessel.

SOUTHCOM’s Posture Statements routinely highlight the success and relevance of HA/DR operations that the Command carries out in its area of responsibilities. Case in point, the 2021 Posture summarizes what the Command did to help Central America after the 2020 hurricanes, stressing that “there is no better way to demonstrate U.S. commitment to the region than to respond to our neighbors’ needs in times of crisis.” Working together to face natural disasters is not just a cliché, it is how SOUTHCOM gets the job done.

Looking to the future, by acknowledging that climate change-enhanced weather events will get worse; by taking into account the positive impact of SOUTHCOM’s role in HA/DR operations in Latin America and the Caribbean, and by highlighting the fact that that the U.S. fleet in general needs more hospital ships, it is clear that SOUTHCOM not only deserves, but also requires, a permanently-assigned hospital ship in order to effectively carry out its missions.