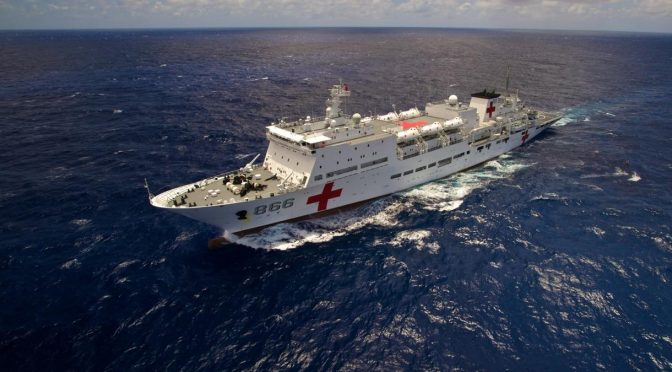 USNS Comfort (T-AH-20) has become a regular visitor of Latin American and Caribbean waters as it often carries out humanitarian operations in those regions. Mostly recently, it was deployed to Puerto Rico to assist those affected by Hurricane Maria. Furthermore, there is now an extra-regional hospital ship which is also traveling to these areas, namely China’s Peace Ark (866 Daishan Dao), a Type 920 hospital ship that is operated by the People’s Liberation Army Navy. Given that the governments these two platforms belong to are experiencing growing national security tensions it is necessary to discuss their activities and put this medical diplomacy in its proper geopolitical context.

This commentary is a continuation of an essay that the author drafted for CIMSEC titled “The uses of the U.S. Navy’s Fourth Fleet;” and draws from an analysis by CAPT John C. Devlin (ret.) and CDR John J. Devlin titled “Aligning HA/DR Mission Parameters with U.S. Navy Maritime Strategy.”

We will not supply an exhaustive list of Comfort’s operations throughout Latin America and the Caribbean, but will rather provide some highlights. Most recently, as previously mentioned, Comfort was deployed to Puerto Rico to assist those in need after Hurricane Maria hit the island. The vessel also traveled to Haiti after the 2010 earthquake to assist with the relief and support efforts as part of Operation Unified Response.

Additionally, Comfort has been deployed to the region as part of initiatives like the Partnership for the Americas and Operation Continuing Promise. Countries that were visited during these voyages include Colombia, Dominica, Ecuador, El Salvador, Honduras, Jamaica, Peru, among others.

It is worth noting that Comfort is a large vessel, with a length of 894 feet and a beam of 105 feet, the same as its sister ship, USNS Mercy (T-AH-19) – the two are converted San Clemente-class super tankers. According to the U.S. Navy,  each platform “contain[s] 12 fully-equipped operating rooms, a 1,000 bed hospital facility, digital radiological services, a medical laboratory, a pharmacy, an optometry lab, a CAT-scan and two oxygen producing plants,” along with helicopter decks. Hence, the vessel is able to provide for vast numbers of patients simultaneously with different services. For example, according to the magazine Dialogo, some 19,000 patients were treated by Comfort personnel when the vessel docked in Belize and Guatemala as part of Continuing Promise 2015.

As for Peace Ark, the Chinese vessel is newer than Comfort, as the former was commissioned in 2008 while the latter was commissioned in 1987 – a two decade difference. The newer vessel reportedly measures 583 feet in length and displaces 10,000 tons fully loaded, and fields a Z-9 helicopter. It also has 300 beds for patients, eight operating rooms and 20 intensive care units. When deployed, its crew is made up of up to 328 plus 100 medical personnel.

In a 2014 article by USNI News, Peace Ark’s Senior Captain Sun Tao declared, “other than internal organ transplant …or any kind of heart disease treatment, [Peace Ark] can pretty much do any kind of treatment.” The article goes on to note that “This includes, perhaps not surprisingly, traditional Chinese medicine. A room onboard Peace Ark is specifically reserved for the ancient therapies of cupping, massage, and acupuncture.”

Because the Chinese vessel has also been deployed throughout Asia and Africa in the last decade, Peace Ark has traveled significantly fewer times than Comfort to Latin America and the Caribbean. Its first tour was “Harmonious Mission 2011,” a 105 day trip in which the platform visited Costa Rica, Cuba, Jamaica, and Trinidad and Tobago. The platform returned to the region in 2015, visiting countries like Barbados, Mexico, and Peru.

At a local level, the arrivals of these vessels are a welcomed development as they provide medical services that local populations may not be able to obtain otherwise from their local governments. Thus, it probably matters very little to the inhabitants of these areas whether a hospital ship flies either a U.S. or Chinese flag, as long as they provide health services that are needed. Indeed, articles published by Latin American and Caribbean media outlets that reported visits by either Comfort or Peace Ark included generally positive statements by local authorities and patients.

At a geopolitical level, these hospital ships carry out humanitarian assistance and disaster relief operations (HA/DR) that are in line with their respective navy’s overall strategies of aiding populations in need. Moreover, and unsurprisingly, these visits help to boost up the image of the nation deploying the platform in the eyes of the hosting government and population. For example, a 2011 article by Mercopress that discussed Peace Ark’s arrival to Jamaica had the following statement “the mission is part of a global campaign by Beijing to portray its rapidly growing military as a responsible power.” Similarly, the aforementioned CIMSEC article states that HA/DR operations “are a vital part of U.S. Navy maritime strategy by ensuring regional stability through building partner nation capacity and expanding our sphere of influence.”

While an exhaustive analysis of each nation that Comfort visits is beyond the objectives of this commentary, it is worth noting that the countries it regularly visits are those that the U.S. has good relations with, though there has been one notable exception. In 2011 Comfort docked in Manta, Ecuador: this is was a significant visit as then-President Rafael Correa was known for his anti-Washington rhetoric and for having ordered the shutdown of the U.S. military facilities in Ecuador in 2009. Thus, it is somewhat bizarre that President Correa would authorize a (unarmed) U.S. ship to enter his country’s territorial waters. It would be interesting if the government of Venezuela would similarly allow Comfort to dock in Venezuela’s coast, given the problematic situation of the country’s health system. Nevertheless, the tense bilateral relations make it highly unlikely that Caracas would authorize such a visit, or that Washington would offer it in the first place.

Moreover, as far as the author can determine, Peace Ark has only visited countries whose governments recognize the People’s Republic of China and not the Republic of China (ROC/Taiwan). It will important to monitor if future Peace Ark deployments include countries that still maintain relations with Taipei, as Beijing may be looking to obtain the recognition of Taiwan’s last remaining allies in the region – the latest nation to switch sides was Panama in mid-2017.

Ultimately, setting aside the geopolitical motivations for the deployment of these vessels, the humanitarian activities that they carry out ensures that both Comfort and Peace Ark will continue to be welcomed across the Latin America and the Caribbean as future harsh climate events will require greater humanitarian assistance and disaster relief operations.

In 2017 alone, regional navies had to carry out major relief operations. Case in point, the Peruvian Navy (Marina de Guerra del Peru) deployed several platforms to the country’s northern regions to provide assistance after torrential rains hit many areas. Similarly, the Colombian Navy (Armada de Colombia) has deployed offshore patrol vessels to transport humanitarian aid to areas hit by floods. Even more, the Honduran Navy (Fuerza Naval) has acquired a multipurpose vessel, Gracias a Dios, to combat maritime drug trafficking and to provide assistance to coastal communities. In other words, humanitarian assistance has been a key component of naval strategies, and its importance will only increase in the near future, meaning that support from allies will remain a necessity for many Latin American and Caribbean states.

USNS Comfort and China’s Peace Ark have carried out commendable humanitarian work throughout many coastal communities in Latin America and the Caribbean as their tours in these regions have helped individuals who would otherwise have trouble accessing medical services. These humanitarian assistance deployments will continue to be necessary in both the short- and long-term. As for the geopolitical value of such deployments, they are a non-dangerous and effective example of “soft power” via which both Beijing and Washington utilize to maintain and improve their image in these regions.

Alejandro Sanchez is a researcher who focuses on geopolitical, military, and cyber security issues in the Western Hemisphere. Follow him on Twitter: @W_Alex_Sanchez

Featured Image: This a Chinese hospital ship. Called the Peace Ark, this ship is under the command of the Chinese Navy. (Photo by Jake Burghart)